Yesterday was something of a milestone for my daughter.  I got pretty excited about it- which is odd considering I'd never set this as a milestone that needed to be reached.

Teagan now has an official BFF.  I say official because this little friend gave Teagan the classic BFF necklace. 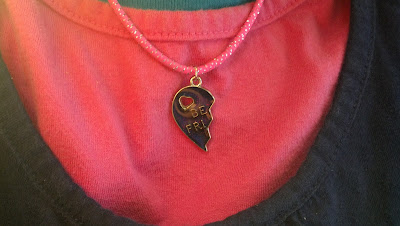 I've never had a friend give me a BFF necklace before.  I admit that I read about such things in books and thought it would be awesome﻿ to have a true best friend- and you know they're true because of that magical necklace.  I was even intrigued by the idea of being a "blood sister" with someone but there wasn't ever a someone who offered.  Thank goodness.

The little girl who gave Teagan this necklace is a great kid from the very little I've seen of her.  We met her mom very briefly at Meet The Teacher Night and liked her.  When I had lunch with Teagan and her friends, this girl was part of the group and I thought she was fantastic.

I sent a little note with Teagan to school for her to give to her friend- it's our contact information.  I feel like helping the girls foster the friendship is a good thing.  Especially in light of the issues Teagan is working through with bullying.  A positive friendship is a very good thing.

My reaction to seeing that little necklace took me by surprise.  I was truly thrilled for her.  Maybe because it meant, to me, that someone really likes her and sees how awesome she is in spite of her bullying.  But I already know that to be the truth- Teagan is always very well liked in every circumstance which is part of why the bullying has always been so baffling.  Maybe I got so excited because I don't think I ever had a super close friend as a kid.

I have good friends as an adult.  I've got my church family and a solid group of people there that I laugh with and can call on in times of trouble.  I'd love to be more social with that group of people- to see them outside of church, to go out to dinner, to hang out and just talk.  I've got Christy.  I've got friends at work.

The people I've known the longest aren't people I stay in constant contact with, unfortunately.  Jim is a bestie but he's more of a soul mate who always gets me and I always get him.  We don't talk regularly, we don't see each other hardly at all.  But when we need each other, we're there.  I've got a friend I stay in touch with from high school.

Without Facebook, I'd still have no connection with anyone past high school.  And the sad thing about those high school friendships is that they really faded when we all went in different directions for college.  I don't have friendships that go back years and years and years.  Jeff's closest friend has been his friend since 3rd grade.  I envy that.  It's part of why we committed to each other and our family the way we did- we don't want to move from place to place, we want roots and security and stability.

Because of Facebook, I have reconnected with some of my friends from junior high.  And I wish we all lived closer to each other because I would love to see them all again.  We were a tight group back in the day and I remember the overnights at Lisa's or hanging out at the pizza place after school and so on.  I've connected back as far as I can with a couple of people in elementary school but most of them don't even remember me- I was just a blip on the map that vanished after 5th grade.

I'm not being unrealistic.  I don't have visions of this little girl being Teagan's best friend forever and ever.  I don't have visions of them shopping for prom dresses together or hugging at graduation or standing up for each other at their weddings or going through motherhood together.  But I do feel a warmth in my chest that tells me this is a good friendship for my daughter.

I remember getting a necklace like that when I was in elementary school. But then the girl and I didn't go on to go to the same junior high and lost touch.

Thank goodness for Facebook, huh? Without it, I also would have no contact with most of my childhood friends.

Oh, and Liz, I tried to e-mail you my address, but I wasn't able to.

What a sweet moment!

I have only one friend from back in my high school or earlier days. A few from college. Everyone else is more recent.

That is so great and so sweet. I'm glad things are working out for Teagan.

I'm not in contact with my 1st grade BFF, but I work at the same school as the girl that became my best friend in 8th grade. With 21 years of memories and counting, I'd say she's stuck with me. :-)

What a touching post. I never had the official necklace, either, and in fact don't know anyone from high school anymore, thank God! :)

I love this post! I have a BFF. We met when we were 11. I just saw her on Halloween and we still connect. Not as often as we'd like, but she's still my BFF. We did pick out dresses together, she stood next to me when I got married, and I gave the toast at her wedding. BFFs are real! I love this sweet moment for you. I commend you for embracing your daughters BFF. Like you, my mom didn't have many close friends, and FB was nowhere around 20+ years ago! She took the opposite route, and tried to keep me from building friendships. It was very hard for me. Luckily, she was wrong. I treasure those friendships I made way back when.

I had many best friends in my early years and I'm thankful for all of them. Like you, I'm barely in contact with any of them now except for on Facebook. Unlike you, I don't have great friends as an adult. I have online friends and I love them and are thankful for them but it would be glorious to have someone local to pal around with.

I'm glad Teagan has a best friend. I hope the relationship will last for awhile and be great for both girls.