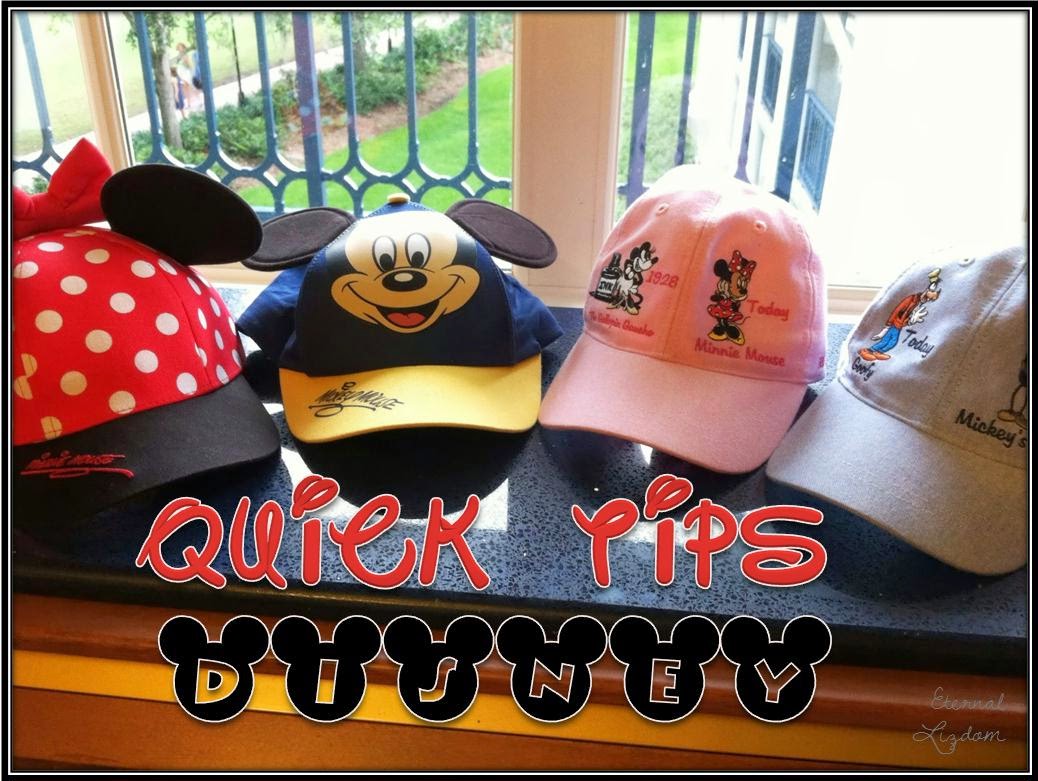 1.  Don't let Disney be your child's first amusement park experience.  Rides and 3D movies can be overwhelming.  If your child has experienced things at the State Fair, Holiday World, King's Island, etc - they will be better prepared for what Disney World has to offer.  We knew the kids wouldn't be doing big rides like roller coasters but had hoped they'd enjoy 3D experiences.  Instead, we learned that anything with a boat was a winner and we enjoyed shows like Finding Nemo: The Musical and the Indiana Jones stunt show.  However, a 3D experience was out for Zach.  Anything that was dark was scary for him.  It was very hard to adjust our hopes for the trip to what Zach needed the trip to be.  We were able to divide and ride for some things - Jeff took Teagan on Haunted Mansion, Jeff and I took turns on Star Tours.  Zach did great on things like the Buzz Lightyear ride and Toy Story Mania.  But he mostly did best with show type experiences - Monsters Inc Laugh Floor was a big hit for him.  He also liked little rides like Winnie the Pooh and Peter Pan and he loved It's A Small World and the Country Bear Jamboree.  Magic Kingdom was definitely the best park for him.  At Epcot, his best ride was the one in the Mexico pavilion in World Showcase.  We rode it twice.  But if my kids were the kind of kids who were eager to go to amusement parks - Disney would have been a chance to kick it up a notch instead of a place full of overwhelming experiences.

2.  Tip your housekeeper daily (you could have a different person each day).  We tipped Mousekeeping each day ($5 per day) - and left little notes.  In one note, we just said thank you.  In another, we told them we were coming up on our last day and that we've enjoyed they're hard work in our room.  In another, we told them that the kids thought it was really Fairy Mousekeeping because they had worked magic in our room!  We also left a picture of ourselves out one day (from the arcade photo booth) so our housekeeper could "see" us.  Our housekeepers made our room fun to return to each day - and also left us extra bottles of shampoo and conditioner and extra bars of soap!

Here are some of the treats left behind by Mousekeeping: 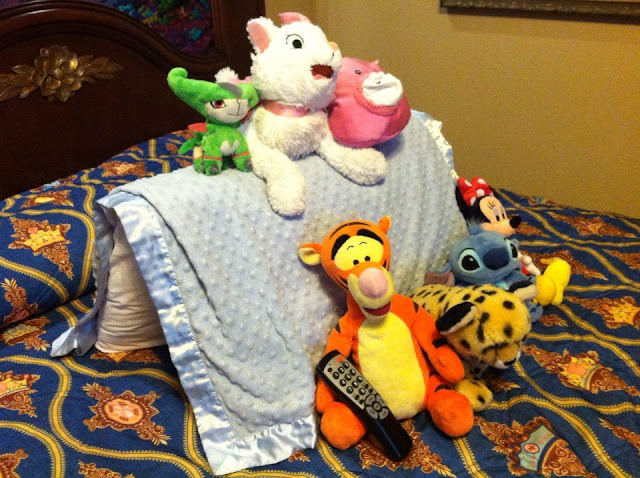 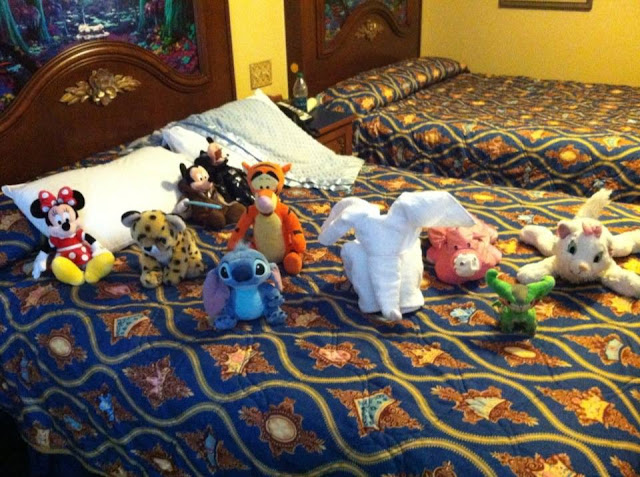 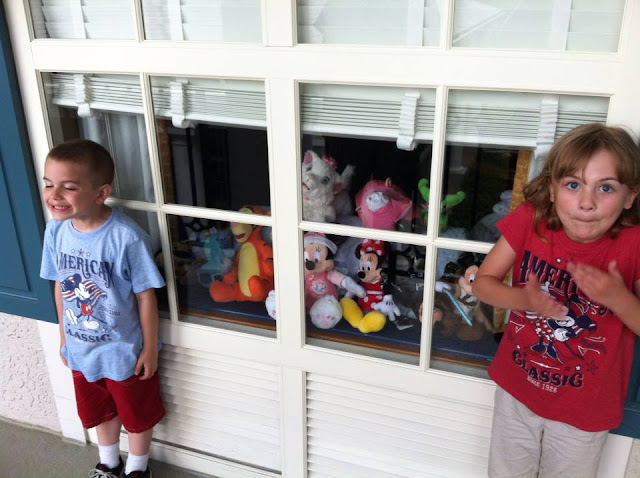 3.  Keep your room organized.  I can't say enough about having a shoe organizer and a pop up hamper.  We were very glad to utilize the laundry room at our resort.  Having a set place for dirty clothes to go at the end of a hot and sweaty day was great.  And the shoe organizer was fantastic - the kids could wake up and grab a bite to eat without any issue. 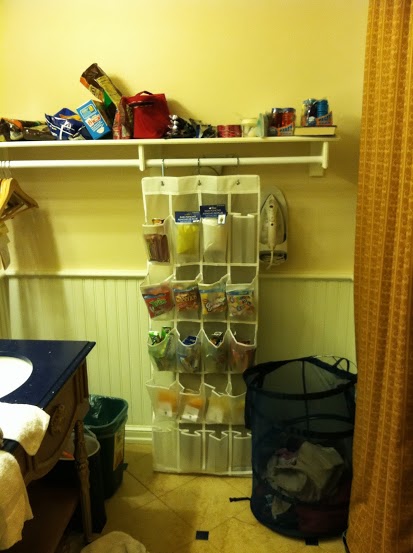 4. Be friendly with all cast members.  I can't tell you how many times our day was saved by a friendly cast member!!  Especially when we were tired, hot, sweaty, cranky... a little eye contact and friendly smile was often the cue for a cast member to go above and beyond.  Not in big ways - just little things to make the day better.  For example, at Epcot, Zach was overwhelmed by all of it and it came to a head when we stopped for a snack and a fly landed nearby.  He freaked out about the fly.  Crying and scared and my normally happy dude was overcome with tears.  A cast member was nearby, cleaning tables.  She saw how upset our boy was and came over to find out what was wrong.  She sat and talked with him and brought him colring pages and crayons.  And she stayed with him until she knew he was happy.  Another night, after a long and fun and tiring day, we got picked up by a bus with a driver in training.  His trainer, Bob, let my kids sit in the seat right behind the driver and then kept them happy and entertained all the way to our resort.  He made faces and joked with them and gave them each a "Safety Tip" card.  Teagan is still doing his routine of pushing her nose to make her tongue pop out and then pulilng an ear to move her tongue to the side... As we were leaving Magic Kingdom - again, tired and hungry - we were greeted by a cast member in the Emporium and she squatted down and talked with our kids for a good 5 minutes about their day and the rides and the characters and when we left that store (we didn't buy anything), the kids were bubbling over with excitement.

5.  Character meals are the best way to meet characters!!  If you want autographs or pictures with characters, the single best way to make it happen is with character meals.  We started out at Chef Mickey's at the Contemporary and got to meet the big guys right away - Pluto, Goofy, Donald, Mickey and Minnie.  We met some of the main crew again at Tusker House at Animal Kingdom - Donald, Daisy, Mickey, Goofy.  My favorite character meal was breakfast at 1900 Park Fare at the Grand Floridian - Pooh Bear, Tigger, Mary Poppins, Alice in Wonderland, and the Mad Hatter.  There are other character meals - I think you can find one for just about any favorite character.

6.  Dollar store glow sticks are awesome.  We didn't have to buy any glow sticks for night things.  We weren't even tempted.  And we discovered that having a little glow stick or bracelet meant that Zach had a little candle to hold on to for darker rides - it was his bravery shield for Pirates of the Carribean.  Plus, we were able to share some Disney magic with other families by handing out glow sticks and bracelets to others!!

7.  No matter how tired you are, take notes!  At the end of the day, take notes.  Jot down the things that made the day special and the things you want to do differently going forward.  Otherwise, there is no way to remember it all!

That's it for now - if you're headed to Disney anytime soon, those would be the top things on my list.  Shoe organizer, tips for house keeping, hamper, glow sticks, journal, reservations for character meals.  Any favorite tips from your own experiences?

This was originally posted in June of 2013 after our first family trip to Disney.