Lessons From A Crouton 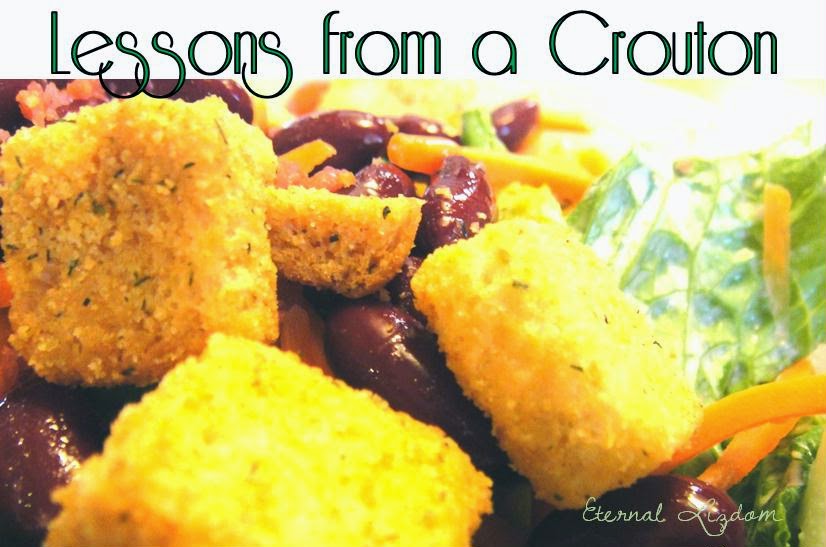 It's funny how life can give you lessons in very unexpected places.

I never thought that a moment involving a crouton, a teenager, and a vaccuum would result in a lot of deep understanding about problem solving, when to keep my mouth shut, and the importance of sometimes making a bigger mess in order to get things cleaned up.

I was watching a teen in our church vaccuum the sanctuary floor after dinner on Wednesday.  He came upon a crouton.  The vaccuum just pushed it around - it was too tall to go under the vaccuum and get sucked up.

I watched the scene unfold.  My Grown-Up-Mom eyes saw the situation and said "Just pick it up and throw it away."  I could even hear my Mom Voice inside my head - sounding authoritative and bossy.  But something made me just sit and watch.

He stepped from behind the vaccuum, carefully stepped on the crouton and crushed it into dust.  Then back to the vaccuum and sucked it all up.

My Grown-Up-Mom inner voice flinched and wanted to say, "What are you doing? Look at the bigger mess!  Why didn't you just pick it up and throw it away?"

But then it dawned on me - this was actually brilliant problem solving.

But without hesitation, he saw the problem, found a solution, carried it through and it was done.

A 5 second situation that ended up teaching me.

About making a bigger mess in order to fix the problem.

About not fearing messiness.

About making a decision and sticking to it - even when it involves risk.

About knowing when to keep your mouth shut.

To someone else... it might have been just a crouton, just a vaccuum.  But to me... it was more than that.  I sat and reflected on how I need to let my kids, for example, make their own bigger messes and figure out their own way to do things, fix things, accomplish their goals.

I thought about areas in my own life, in my home, in my work, in my church - areas where it might take a bit of a messier mess to make something better first.  From simple things like cleaning out my closet to more complicated things like rejuvenating a ministry.

So often, I want to contain the mess to clean it up.  I want the mess to have boundaries.  I want the mess to still have a sense of control to it - a simple crouton on the floor.  But sometimes... God needs me to mess the mess up a bit more.  Maybe to show that the problem is bigger than it looks (spread out crumbs of a crouton).  Maybe to make it easier to clean up (so the vaccuum fits slides right over it).

Where do I need to step on a crouton?