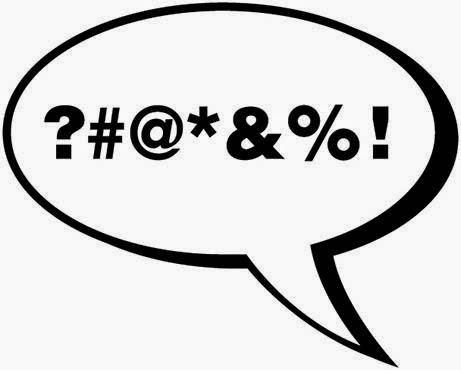 Fair warning - this post will contain some adult language not normally found on this blog.

I've been waiting for this day. And I'm honestly surprised that we made it to 4th grade without much incident. I've always been of the assumption that once you reach the upper levels of elementary, you've started being exposed to bigger topics and broader world visions than what you get at home.

I know I first started hearing cuss words on the bus.  I would have been pretty young - I'm thinking maybe 2nd grade or so.  I also remember getting mad at my mom and writing some cuss words on my wall with a pencil. She cleaned it up and then we sat down and had a conversation about cuss words. What I really remember was her explanation as to why she sometimes liked to use the word "shit."  It starts out soft with the shhhhh sound and then ends with a hard and angry sound - T.

My mom wasn't much of a cusser.

When Jeff and I met, he had quite a vocabulary. When I got pregnant, he knew he had to change his ways. So he started subbing the word "smurf" for the cuss words.  Which sometimes led to some very funny sentences. But it did change the habit.

We aren't a house that cusses. And we are mindful of language around the kids. When I do cuss, it's at work or out with a friend and not generally just randomly sprinkled in my conversation but more to provide emphasis or emotion.

So my kids haven't really been exposed to a lot of cuss words.  And when they have been in a room where someone says Shit or Damn... we just haven't really reacted. We don't give power to the word.

Recently, I was home with the kids and Jeff was out. Teagan tells me that she had an interesting experience at the before care program that morning.  A kid was running around telling people to say "gay bitches." Teagan then says "And I fell for it until my friend told me it was bad and so I stopped Zach - thankfully, he didn't say it!"

I love that kids think that saying a cuss word is an action that might cause you to implode or something. Like the act of saying the word is the bad part - not the meaning of the word. I like that because, at least for my kids, they haven't learned the power of those bad words yet. The words themselves don't hold meaning... so it's akin to a bad thing like stealing or hitting someone. Saying the words is a bad action to them.

Teagan goes on to tell me that she didn't know what those words meant. So I took a deep breath and knew it was time to address the topic.

We know what the word gay means and in our family, it isn't a bad word. But sometimes people use it like it's a bad thing to be gay.

Bitch is a derogatory term used towards women. Then I have to explain what "derogatory" means.

Then I ask if they've heard any other words that they know are bad words but they don't understand them...

Teagan says she's heard kids talk about "the s word" but she doesn't know what that word is...

So I explain that the word is "shit."

Zach wants to know what the words means.

Well, it's another word for poop but it's mostly a term people use when they are angry or frustrated.

Zach looks at me, very seriously, and says...

Yep. You will get in trouble, buddy.

We then go on to the word "ass." Which I explain means butt or donkey. But again, it's a word people use when they are angry and they aren't really using it with that meaning to it.

Teagan then tells me...

"I hear Daddy use ass in the car when he's driving. A lot."

But it seems to be over.

I just explain that it's a substitute word for a really bad word and that people use it when they are angry or frustrated (notice that pattern of anger and frustration).

And days later, I realize that I've caught myself using "frickin" far more often in my home than I had been aware of...

Lesson learned. Little pitchers have big ears. They hear everything and absorb everything... even the things we aren't aware of.

Teagan starts 5th grade next year and I know we will be facing a lot more of these kinds of topics. I'm relieved that it took this long to really be exposed to "bad words." I'm glad my kids held on to some of this innocence for as long as they did. I'm glad we've built our home in a community and in a church where my kids have been able and will continue to be able to be children and not forced to grow up too soon, too quickly.

we had a cuss words talk with Kelli just last night...she said that a neighbor girl (another 2nd grader) had used the "s" word and the "b" word on the bus. She didn't want to say the words so I don't know which exact ones they were (for example, "s" could be "stupid" and that would be bad in her mind), but it is crazy having to have those conversations. Great job in being transparent and not pushing it off. It is important for our kids to know they can come to us and that we won't push their questions aside and we will tell them the truth (good bad or ugly). Thanks for sharing this.

I'm not dealing with young children, but I have been trying to clean up my expletive vocabulary. "Frak" from BSG can substitute for the other f-word sometimes. Isaac Asimov writes using "Galaxy!" as a curse-word exclamation, but three syllables don't work as well as two or one. I may try "hark" or "harking" next.

This is a topic I don't usually think much about since I don't have kids in my house. But I become really hyper-sensitive when I'm around my 9-year-old nephew or some of my friends' kids.

This is funny because I also had a talk with my girls about bad words today! Except my girls are older (12 and 14) so they do know what all of the BAD words are.

Our conversation centered around the medium words. We've never allowed them to say "crap" or "pissed off" or "dang." Cassie said something like "screw it" and it started a whole conversation about why I don't want them to use "screwed" or "sucks" or other words that essentially have sexual connotations. So then they went back to asking if it was okay if they use "crap" and "dang."

I was pretty much at a loss. I tried to explain that words like that aren't really BAD but that some people don't like them and that they don't sound ladylike or professional. And that when you use words like that casually too often, they will start to slip into the conversations you need to be ladylike and professional.

It was not my finest moment as a parent because I couldn't really give them a lot of solid, concrete advice!

I ended up going back to my days as a lawyer and told them that I agree with Supreme Court Justice Stewart that I can't exactly tell them all the bad words but I know it when I see it!