The drive to the surgery center was better than expected. The snow was falling and the roads weren't the best but it was early enough that traffic wasn't much of a hindrance. We arrived right on time- 7 a.m. Filled out papers, played in the little waiting area. Go back into his "room." The TV is on, there is a load of kid books. We do the intake stuff with the nurse. Did I mention that staph infection came back on Monday? It did. There was a smidge of concern that they wouldn't be able to proceed because of it... but since the doctor wasn't going to be cutting, the concern wasn't valid. We were on track. We waited. 8:00 came and went. Waited, waited. 8:30... still waiting. Finally, around 8:40, the doctor came in to check in with us and talk about what was coming up. "We're just going in to look. See if there is any webbing or anything that is causing this issue. If we find anything, we'll..." This is where he suddenly went into slow motion and things became panicky for me. "... take a sample for a biopsy." Biopsy?? No one had said anything about biopsies or there even being anything that could need a biopsy!! The doc leaves and we get Zach into the little hospital gown. I start talking to him a little about what is going to happen. A nice nurse, Connie, came in. She'd be taking Zach back to surgery and she would be with him the entire time. She asked if we were ready- offered to carry Zach or he could ride on the bed... I had spied a little wagon in the hallway and asked if he could go in that. I knew that would make it fun for him... less of a battle. Connie went to get him a warm blanket and he toddled off into the hall after her- eager to get to that wagon. All the nurses wear purple scrubs... Zach went after the first pair of purple legs he found... hoping they would take him to the wagon. It was pretty cute. Got him settled into the wagon with his blanket... and off he went... around the corner with a serious and uncertain look on his face, but no tears, no fighting. Jeff and I went to the waiting room. Had some hot chocolate. Jeff read his book, listened to his iPod. I plugged into my Zen and watched part of an episode of Torchwood. And we waited. About 40 minutes later, the doctor came out. Said there was nothing wrong inside. Spouted off a bunch of biological medical terms... but bottom line was that each kidney is working properly and dumping properly, there are no growths or webbing in the bladder, everything is connected and working. His urethra is too small (where the pee comes out). So the doctor made an incision. And some stitches. And when he's all healed, he will be normal sized. What had happened these few times of blood in the urine... the urine came out forcefully, pushed open the too small urethra and it snapped back shut and would bleed a little from the force. We waited a few more minutes and a nurse came out to bring us back. Said we could wait with him while he slept. She said he'd sleep like that for a bit but there was no reason for us to not be with him. We'd already been told he'd be out for 60-90 minutes. I stroked his hair and kissed him a bunch. He was awake in about 15 minutes. Woke up and wanted his thumb- had to get the nurse to remove the monitor thingee so he could get that comfort object into his mouth. Sat up and the nurse brought him a popsicle, some ice water. He was very happy about the popsicle and chugged a bunch of the water. 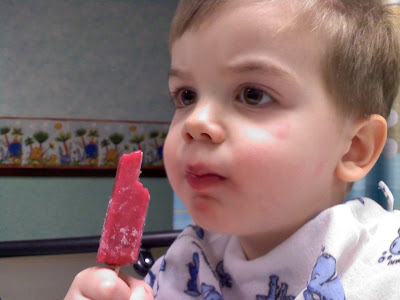 As he chomped away on the popsicle, I noticed the stick had writing on it... see? write by his hand... 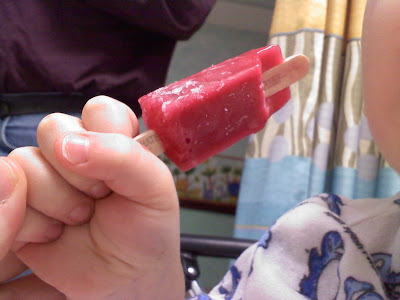 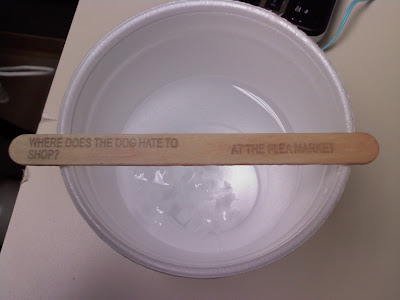 After the popsicle, he slurped down an applesauce and then we were on our way home. We stopped to fill the prescription for Tylenol with codeine (yay for insurance- it only cost $.33) and loaded up on cottage cheese and yogurt for Zach.

Came home... and took a nap. That morning wiped me out.

Now we have to watch how he plays (no straddling toys, no rough housing) and we have to put neosporin on his penis with each diaper change. I also have cream that I'm using for the rash- but if that isn't significantly better by tomorrow, that's going to be another trip to the doctor.

Thank you for the prayers, comments, e-mails, and Facebook messages. It meant so much to know that so many were pulling for us and thinking of our little buddy.

Oh Liz,
I am so happy for you. Let's hope he heals quickly and this is the end of this!

I am so glad that everything is going to be ok for Zach! I know the worry and the second guessing and all the feelings a parent has when their child is healthy like you want or expect. And now for you it's gone.

What a relief that it was a totally fixable problem. Hope it's not bothering him too much or throwing off the rhythms of your house.

Funny about the popcycle...

I bet he recovers faster than you do!

This is my favorite post title ever, by the way.

The title pulled me in as well. So did the picture of just the HATE part. I'm glad he's your little man, your soldier.

@Momza I took your advice yesterday and picked up Target's version of Airborn to boost my Vit C intake. Hope it works!

@Shannon As soon as those stitches dissolve... then it'll be gone! ;)

@KPCL Had to give Teagan a little extra attention last night and this morning- but I didn't mind it in the slightest. :)

@Flartus We were laughing quite a bit over the hate popsicle... He had it gripped in his hand in such a way that we couldn't see any other words or letters for the longest time...

@Garret That popsicle thing was hilarious. Jeff and I needed a good laugh at that point, too. Apparently the nurses thought Zach was pretty funny- they were all watching him eat his popsicle and giggling because he eats it like corn on the cob!

so glad everything went well. Now to take it easy and recover...

I'm glad everything went well and that Zach's doing okay!

@designHER That is a HUGE challenge!! The codeine should make him drowsy- but totally doesn't. He is eager to be up and running and playing like he was before. Good to know he doesn't have pain but I just want him to sit and HEAL!

@Karen Thanks! ME TOO!

Glad it went well. My kids are really combative coming out of anesthesia. They get that from their mother.

LOVE the pic of Zach with the popsicle. Way too cute.

He is so adorable, and I am so relieved on your behalf. And I am sure that you have already been through all this with the rash, but is it yeasty? We ended up having to get a pretty strong topical steroid when Owen kept getting terrible rashes when he was a baby-he was very prone to thrush.

What a relief that it could be fixed easily! Sounds like Zach handled everything like a real champ and so did mama. :) Praying that everything heals quickly with no complications or pulled stitches.

@Amy They warned us about all the ways he might act coming out of it. But he just... woke up. Hardly even fussed!

@Kori We've been fighting this rash for months. Have tried everything. We've been to the doc a few times and I'm hoping to avoid going back- the cream seems to be working. We do know it's a staph infection. ugh. My fear is if it turns into MRSA.

@Mary Thanks! I have the same hopes!

So glad he's on the mend...I'm telling you, those kids are amazingly resilient.

So glad to hear he is on the mend. I can't imagine having to tell my toddler he couldn't straddle anything. He might not know how to sit. LOL! Fast healing!

I'm so glad he is okay. What a scary ordeal for your family. Hopefully he'll heal super fast.

What a little trooper!! Thank heavens that is all it was!

My 2 year old can't even get on a scale to get weighed she screams so hard!

I appreciate this post so much. I had an attending physician who emphasizes that there is no such thing as a "small procedure." Each surgery, procedure, etc, is a big deal for the individual and family undergoing them.

@Lety It's been a battle already for sure! Everything is a toy he straddles- dump trucks to step stools!

@JLW It's not been fun- but we've had amazing support in "real life" and via "online friends."

@Girl Next Door He was remarkably cooperative. It seems to be his base personality. He certainly deviates from it- he is 2 afterall- but that laid back side comes out when it matters.

"Got him settled into the wagon with his blanket... and off he went... around the corner with a serious and uncertain look on his face, but no tears, no fighting."

For me, this is the worst part of surgery. The "last look" before your child is taken is so tough. (Both my kids had minor procedures.)

I am so glad that you have an answer and the problem is fixed. I hope that Zach heals quickly!

So glad the little man is doing good!!!! Lots of love from Ohio!!!!

I'm so happy, Liz. I've been worried. Love from Seattle!

Here's hoping for a speedy recovery. Glad your son is ok.

Take a nice deep breath. Have a popsicle yourself. He'll be good as new in a week.

So glad to hear that he is OK and that everything went well. I'll keep you, him and the rest of your family in my thoughts and prayers!

I'm grateful for the update and glad things went well. What a little trooper :)

I'm embarrassed that I'm so behind on blog reading, I'm just now learning the results of his surgery. And I am so thankful that it was an easy fix! Yaaaaay! :)