Today's post is from my friend, Andrea. She's an unexpected Disney fan just like our family. She just got back from a trip and wanted to share why Disney is magic for her family!


Kairos (καιρός) is an Ancient Greek word meaning the right, critical, or opportune moment. The ancient Greeks had two words for time: chronos (χρόνος) and kairos. The former refers to chronological or sequential time, while the latter signifies a proper or opportune time for action.--Wikipedia

“You are going to Disney again?” I know what they really mean to ask when they say this. They mean, “Wasn’t once enough?” or “Why don’t you go someplace else.” “Aren’t the kids too old for Disney now?” Maybe we should go somewhere else. But was once enough? Nope. Disney is magical. Disney is Kairos time, sacred time, a time carved out of ordinary time where regular time is suspended. 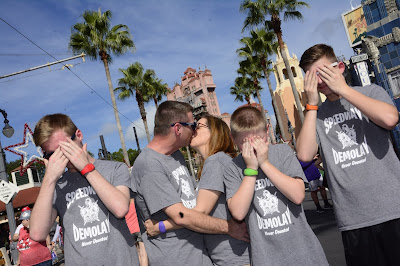 We just returned from a Christmas holiday trip to Disney World in Orlando, Florida. It was our 7th (?) trip in about 15 years. We had never been there during Christmas time, however, always preferring to go in October during fall break. With one kid in college now and breaks not lining up the way they used to, the only time we could fit the trip in was Christmas. Initially, I was not happy about it. The most crowded week of the year? Give up my relaxing time at home between Christmas and New Year’s? Not at all what I preferred to do. But, we make sacrifices for our children. And for those moments of Kairos.

A well-planned Disney trip (thanks to our wonderful Disney planner, Katie Dixon with Hi Ho Vacations) sets the stage for Disney Magic Kairos Time. Despite the schedule, jam packed with early morning Magic Hours, fast passes, and dining reservations, this year I really tried to pay attention. I wanted to drink in this family time, knowing that it may be one of the last trips we take as a whole family together. I wanted to pay attention to who the kids are and who we are as a family.

One of the best things about Disney is how it grows with you. When they were little, the magic of meeting their favorite characters “in the flesh” was just about all the excitement they could bear. We would seek out the characters at the various meet and greets. Armed with their little autograph books, they would bask in the glow of a hug from Pocahontas or a high-five from Mickey. What a treat to meet Buzz Lightyear and Woody after riding the Buzz Lightyear ride! As they grew, they tackled the more thrilling rides like Rock n Rollercoaster and Space Mountain. This year, the youngest kid started really noticing all the work and attention to detail that Disney puts into creating each one of its rides and environments. Disney goes all in with the theming, no two dimensional facades for them. In Pandora, he noticed that even the railings for line control at the Na’vi River ride were designed to look like natural materials instead of just standard metal railings. We all marveled at the way the Banshee in Flight of Passage “breathed”. Still, at each stage, they love to return to the old favorites… Buzz Lightyear, Pirates of the Caribbean, the cheesy Jungle Cruise. They even humor me in my assertion that you have only really been to Disney once you’ve ridden It’s a Small World.

Three boys, ages 20, 16, and 12. Different stages and very different personalities. In real life, the two oldest get along ok. Jake tends to be very critical of his younger brother, Griffin, but they share an interest in sports and their deep involvement in DeMolay, a Masonic youth organization for boys and young men. Jake also tends to be critical of the youngest, Owen, but has more patience for his quirks than Griffin does. In real life, Griffin and Owen do not mix. They are the proverbial oil and water. Or, perhaps, a more combustible mix like cyanide and some kind of acid that creates a highly toxic hydrogen cyanide gas that can kill all in its path. Griffin lacks any patience with Owen and can’t believe Owen doesn’t like sports. Griffin sees Owen’s youth as stupidity instead of inexperience. They have DeMolay in common as well, but Griffin’s advanced age, bossiness, high expectations, and selective memory make him extra critical of Owen in that arena. Life in ordinary time with these two is rife with conflict, hateful attitudes, toxic conversations, and generally surly teenage attitudes.

Disney Magic Kairos Time, is different. Disney Magic Kairos Time brings out the best in all of us. It begins the moment we settle into the car to get on our way and generally lasts until a few miles away from home at the end of the trip. Nope, not even 16 hours of confinement in the car (each way) can disrupt Disney Magic Kairos Time.  I mean we aren’t perfect, even in Disney Magic Kairos Time. We are just better, nicer, more helpful, more enthusiastic, more patient versions of ourselves. There is no room in Disney Magic Kairos Time for surly teenage attitudes. Nobody is “too cool” to ride It’s a Small World. They won’t ride it more than once, mind you, but it is part of the Disney experience. Griffin, the king of 16 year old attitude, insists that we start our Disney vacation with the Ohana breakfast at the Polynesian. He happily embraces Lilo, Stitch, and Mickey when they made the rounds at our table. Those Mickey waffles do something to a guy… Despite my reluctance to see that abomination, Donald Trump, defiling my beloved Hall of Presidents, my boys convinced me to go anyway. And we didn’t hate it. My husband thought Disney handled it well. There was no eye rolling as we stood in the short line for the Three Caballeros ride at Epcot. Soarin’ just makes us happy. There was genuine awe and joy as we looped, dived and flew through the Flight of Passage at Animal Kingdom.

Perhaps the best and most important realization that I had during our time out of time at Disney this year, was how connected we are as a family. It is at Disney that I notice most that we are truly a unit. At Disney, I can see the invisible threads of love and devotion that connect us. It gives me hope that those bonds will endure even after they are grown and gone from our home. In Disney Magic Kairos Time, Griffin leads the way consulting with Jake, checking the Disney app for wait times and the best route from here to there to make sure we get to our next fast pass on time. He leads, but he never leaves behind. He is never more than three or four yards ahead, always checking back to make sure that we are still with him.

In Disney Magic Kairos Time, I notice how physically connected we are. We hold hands, walk with our arms around each other, and occasionally hug. Owen, at 12, is still not quite taller than me, despite what he says, and still enough of a little boy that he doesn’t mind frequent hugs and hand-holding with his mother. Griffin, firmly entrenched in the teen years, shows his affection with pats on the back that are almost a little too hard, playfully bumping into us to move us along or get our attention and, occasionally, he puts his arm around me and leans. Jake, almost 20, mature for his years, seems almost protective and solicitous of me. He frequently puts his arm around me as we walk and talk, staying connected in the midst of the bustling crowds. They do the same with their dad. We stick together. There is no splitting up, Jake makes sure of it. We all go or none of us do. In Disney Magic Kairos Time, the older brothers put their arms around the baby brother to guide him and encourage him, rather than to choke him. It is a beautiful thing to see and even more beautiful to be a part of.

We stay in warm bubble of Disney Magic Kairos Time during our trip home, for the most part. Everyone is reluctant to go back to normal. If there were a way to conjure it up when we are back home and back to our daily lives, I would. I find myself looking at our pictures frequently. (Love that Memory Maker.) My new Disney tennis shoes on a Monday morning brighten my day and conjure up just a little bit of the Disney Kairos Time. My husband holds on by keeping up with the updates on Disney parks throughout the year.  And there is always planning the next trip. Maybe next Christmas? Star Wars Land, anyone?

Thank you, Andrea! I love this because it really captures why I also love going to Disney. It's unexpected but we are really a version of our best selves when we go. Not every moment is magic, of course. But I can more easily see our goodness and joy and love for each other. I like the spirituality of calling that Kairos.

Until next time,
Liz