My Heart Is So Heavy

I am heavy with grief.

Not my own. The grief of others.

A friend's husband died. Unexpectedly. He was only 59 years old. They were best friends. 2 teenage daughters. Lives are forever changed, reformed, redefined.

A friend stays in a dead marriage. The love is no longer recognizable - it died a long time ago. Became something twisted and dark.

A friend is in a dying marriage. There may still be a chance to save it but the marriage is on life support and decisions are being made about whether or not to pull the plug.

I have met women at church whose husbands have died in the last couple of years. I only know them as widowed women, I never knew them as married women. I am part of their new definition and am one of many reminders of what they have lost.

The anniversary of a mother's passing in our online mom community has just gone by - a reminder that years have passed where her children and her husband haven't had her there to comfort them, care for them, nurture them, celebrate with them.

And then there is the news. The rage inducing horror happening in places like Baton Rouge and St. Paul. The horrors of war across the globe. The pictures and videos that make grief and loss and violence more real than many have ever known or will ever know.

The press conference with a grieving widow and her teenage son, weeping.  Alton Sterling.

The cell phone video of a women with her boyfriend's just murdered body leaning against her and her child in the backseat, attempting to comfort her. Philando Castile.

I am sad for my friend whose husband died. Her loss weighs heavy on my heart. I cry when I think of what the days and nights must be like for her and for her daughters right now. I am also angry. Angry that these girls don't have their daddy to be there for milestones as they enter adulthood. Angry that my friend no longer has her best friend by her side.

I am sad for my friend in a dead marriage. She deserves love and compassion in her marriage. She gives so much love to others and her marriage should be a place where her love is shared and returned and grown. I am angry because her husband does not see the damage he causes. Angry that beautiful people are being hurt.

I am sad for my friend in a dying marriage. To see her struggling to keep that connection, to see her trying to work through the problems. Hearing that they are out of sync. I am angry that he doesn't want to fight for it at the same time she does.

I am sad for the men and women I know who have lost their spouses. Some before I connected with them, some after.

These are the close and personal mournings that I carry. The heartbreak and struggle of those around me - close to me or at arm's length. Dear friends or new acquaintances.

And then there are the injustices. The losses that I am not personally connected to but that are connected to greater problems in the world. Death that is connected to police brutality. Racism. War. Terror.

I sit in my white, suburban, upper middle class, educated, well employed bubble of privilege and I don't know what to say or what to do. I hear the pain. I hear the anger. And I understand it as best as I can.

I used to think it was "enough" if I made a positive impact on just one life. If one person's life was better because of something they learned from me or gained from me, then I knew life's purpose.

But it isn't enough.

I used to strongly believe in "being the change I want to see in the world." That if I keep loving and giving and demonstrating compassion, somehow others in the world will be inspired and that whole pay it forward thing would happen.

I don't believe that anymore.

We are in a season where we are more connected by our grief, our sadness, our anger, our frustration, and our loss. And we don't know how to hold each other up through it.

Because I just don't know what else to do. 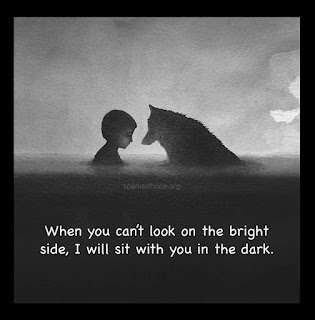