Yesterday, Christy and I decided to take on that challenge. 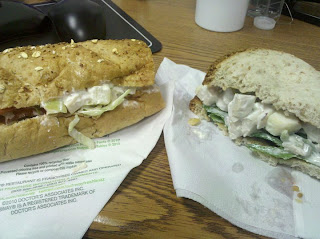 Christy didn't like that the Arby's chicken salad was warm (the bread is toasted and the chicken itself was warm, I think).

I thought I might want to try the Subway version on flatbread because I found the sub bread to be too bready and interfered with the flavor of the chicken salad.

I found Arby's to be sweeter and fruitier.  Subway was kind of salty and the fruit was dried instead of fresh.

Christy and I both liked the large chunks of apple and the whole grapes in the Arby's chicken salad.

We also both agreed that when wanting chicken salad, neither one would be our choice.

Personally, I slightly preferred the Arby's over the Subway if I was only looking to get a sandwich based on how it tasted and only taking my own food consumption into consideration.

We both agreed that Subway was the better price option.  $5 for the sandwich at Arby's or $5 for the footlong at Subway (so $2.50 for a sandwich for us).  Without the $5 footlong special, I think the Subway version is around $3.50 for a 6" sandwich.

Christy and I had a... passionate... discussion about the differences in healthy options between the two restaurants and that led me to doing some research. 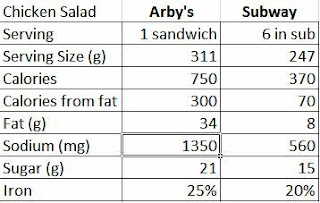 That information makes me glad I only ate half of the Arby's sandwich.  750 calories!  And that's a lot of sodium!  And the calories from fat and fat grams and sugar- yikes!

To be fair, if I'm going to Arby's or Subway, chicken salad isn't what I would choose.

I've struggled in the past with finding food I feel good about from Arby's.  It's expensive, a lot of fried options, and the last time I ordered a salad, I had to choose between shaved turkey and fried chicken to go on it.  So I thought I should explore the menu and see if I could find items I might think could be healthier and check out their nutritional information.

I also compared what I would normally get at Subway- a 6 inch turkey sub with veggies, light mayo, brown mustard, no cheese.

First off, I'm screwed with sodium no matter what.  No way I'm going for the tukey and swiss at Arby's.  710 calories is off the charts (when I'm paying attention to what I eat- otherwise, I'm sure it tastes good and can be considered healthy in so far as it isn't fried).  The salad isn't a terrible option- but I didn't love that salad last time I was there.

But what about when I take my kids out to eat?

Part of why we don't eat at Arby's- and there is one within walking distance of home so it would be convenient- is that I don't like the options for their kid meals.

To be fair, I don't check calorie and fat counts on food choices for my kids.  I do pay attention to sugar and we try to avoid fried foods.  We've been focusing on ordering water with our meals- because it's both healthier and less expensive.

I compared the Subway roast beef to the Arby's meal just for the sake of being as "apples to apples" as possible.  However, my kids tend to get a sandwich with pepperoni, cheese, olives for Zach, tomatoes for Teagan.  They don't eat the bread.  They get apples and water (sometimes a juice box or milk for a treat).

So the results of the taste test?

Honestly, neither one of us is itching to go back and get one sandwich or the other.

For me... Subway. But I wouldn't order chicken salad.

(Although, as a family, we generally prefer McAlister's.)

Absolutely SHOCKED by the sodium content in all the statistics that you posted. Thanks for that! As for the comparison, I'm a fan of Subway myself. I have never tried either of their chicken salad sandwiches but was intrigued by the commercial for Arby's as it had pecans in it. After looking at the nutritional information, I am so happy that I let you do the comparison for me! :)

Seeing that Subway has it makes me want to make chicken salad soon. I like their buffalo chicken sandwiches on flatbread. I love the flatbread...

It's amazing that they they can take healthy foods and make them terrible. Like McDonalds and their oatmeal. I didn't look specifically for the article but overall this website is an amazing website:

I'm not a big fan of Chicken Salad. . . UNLESS. . .it comes from the Bread Ladies restaurant in Greenfield. They put mandarin oranges in theirs - just a slight change of flavor but it makes ALL of the difference- and on their fresh baked bread or croissant? It's heavenly.
It is a bit of a drive- but if you want the holy grail of chicken salads - Bread Ladies is it. :)

To be fair- I don't get chicken salad at McAllister's either. I like theirs but chicken salad is just a crazy unhealthy food when paired with bread!! McA's chicken salad alone is 338 calories and goes to 705 calories on Harvest Wheat bread! You could have it on a wheat or white hoagie for lowest calorie option- that brings it down to 533 calories. That Harvest Wheat bread is a bad idea- 2 slices adds 652 mg sodium and 12 g sugar to your sandwich!! The chicken salad has 477 mg sodium and 2 g sugar on its own. I don't know that anyone would pick the wheat hoagie bread as the "healthy choice" at McA's-but it's your best option!! It's better than the wrap (295 cal, 773 mg sodium, 2 g sugar).

The big lesson? Educate yourself!! I've learned this lesson over and over and then I get lazy. I think i need to start reviewing the menus of my favorite eateries and have a list of healthy choices on hand. Plus a list of my fave foods and their nutritional info because seeing 750 calories for a single sandwich is a great way to persuade me away from it!!

Also, Christy and I discussed the Arby's wrap vs bread this morning so I wanted to include that info.

If you do the chicken salad wrap instead of sandwich:

Wraps or tortillas are notoriously high in fat and carbs. They are lil food misnomers. Flat bread is a better option over wraps.

I liked this article Liz. I have been doing my own label looking since I found out last fall that my oldest is Type 1 diabetic. For her, skinny minny, I don't worry about good fat contents or calories, just carb content, sugar content and sodium. I like to find foods high in calories and protein and iron for her but low in carb and sugar.

Miss Chef stopped going to Subway a while ago, when we got into the local food thing. I always loved Arby's terrible roast beef & cheddar, but I stopped going to Arby's because I finally got to the point that it just tasted gross to me! I still eat a lot of garbage, but I guess I'm making some progress...

But another big reason I won't be going to an Arby's soon is the ones around us are terribly managed--dirty, slow and no people skills. Customer service is king, people!

ugh! Subway is about the only "fast food" type place I ever eat and only because it's not fried. I'm sure the sodium is secretly killing me! I think I'll pass on either of their chicken salad and stick to my homemade verson!

Flartus, the funny thing is that Arby's now follows me on Twitter. I'm sure they picked up on their name in my post title when it auto-tweeted today. Wonder if they bothered to read the blog?

I haven't tried the chicken salad from Arby's. I had the Subway chicken salad once and I felt sick after I ate it. Never tried it again, though I'm sure it's not Subway's fault I got sick. I'm pretty sure it was a coincidence. But you know how it is.

When I was a kid, I LOVED Arby's roast beef sandwiches. I don't know why. I was a weird kid.