All This Gay Stuff

Did you notice a lot of red?

It really depends on who is on your friend list.  I'm relieved that my news feed was showing a lot of red.

Prop 8 went in front of the Supreme Court on Tuesday.  DOMA (Defense of Marriage Act) is up today.

California Proposition 8 first in the scene during the 2008 election season.  It's state legislation that declares that a marriage in California is only valid if it is between a man and a woman.  In August of 2010, a US District Court judge issued an injunction against enforcing Prop 8 and the 9th CIrcuit Court of Appeals continued the stay.  That stay is now the subject of discussion in the US Supreme Court.  The Supreme Court is being asked to decided whether the ban on same sex marriage wrongly denies the right to marry to gay and lesbian couples.

The Human Rights Campaign traditionally uses this symbol for support of equality:

In support of equality this week, they've updated the logo to red and are asking people to wear red to show their support for same sex marriage. 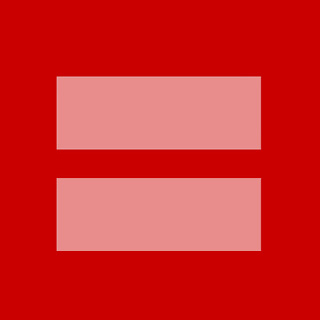 Today, the Supreme Court is hearing arguments on DOMA.  In 1996, DOMA passed Congress and became Federal law that defined marriage as between a man and a woman.  President Clinton signed it into law.  Many legislators and President Clinton have since publically rescinded their support of DOMA.  Today, the Supreme Court will be hearing and having arguments about the constitutionality of DOMA.

Yesterday, I posted this image and changed my profile picture. 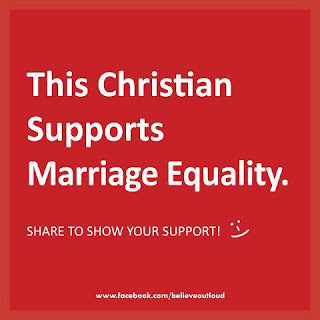 I was nervous when I posted it.

And it struck me - if I'm a little nervous about possible backlash from people knowing that I support gay equality, imagine how I would feel if I was about to come out to friends and family as being gay.

But then the "likes" of support started up.  And some friends even shared the image on their own walls.  And a couple of my favorite gay guys expressed their appreciation for my sentiment.  And as the day continued, I saw other people from my church and elsewhere posting their own symbols of support.  A Sunday School and preschool teacher... a teen daughter of a friend... friends from my Jesuit college... a friend from high school who is now a United Methodist pastor.

The tide is changing.  And many who have been hiding within their churches, afraid to speak out against the majority are starting to use their voices.  There is a growing population in our churches, who follow the teachings of Christ, who are getting louder.

We believe in the things Jesus taught.  About love.  And forgiveness.  About kindness.  About acceptance.

You might not agree with me.  You might have a hardcore, faith based stance opposite of mine.  All I'd ask is that you take some time to sit down with someone who simply wants to love and marry the person they choose to love and marry.  And if there isn't anyone in your life that is gay... I will introduce you to one of my friends.

We have to be unafraid to speak up for love.  We have to be bold in voicing our support of those who are treated differently, unfairly, and even cruelly.

Well said, written and expressed, Liz! A lot of us are in a similar position right now with how we feel personally, and the anxiety we feel about how we are perceived when expressing them, especially family and close friends. Your writing is always so gentle and loving, yet you always make your point. Well done! Liz

Good for you--once again! It really made my heart soar to see the red boxes multiplying in my feed. I have to check myself from judging those who haven't, though! Too easy, and not fair.

I wish I could find a way to share the continual roller-coaster of hope and resignation I go through whenever this issue is at the top of the nation's priorities. Miss Chef is convinced we're never going to be married, but I can't give up hope. I just don't want to be one of those silver-haired couples rolling into the courthouse in a wheelchair when it happens.

Even though I put my red equal sign on FB, I was nervous about it for the reasons you listed. And not nervous--because my kids and grandkids are out there, too, and even though they're not my responsibility, it's important to me that they know I stand for...well...equal.

The tide is changing partly due to you! I've had a few straight friends post the red equality sign or the like and I can't tell you what a warm fuzzy feeling it gave me. Unfortunately not enough of my friends from years and years ago did but it's a start.

I'm grateful for you Liz.