Daddy has been away on business this week.  He left Tuesday and is coming back this evening.

The week had mostly been fine.  Thanks to flexibility with my job, I was able to work from home one day this week and that helped a bunch.

But knowing that he is coming home today... knowing we made it through the week without issues... my kids are showing signs of the stress of the week.

For Teagan, an evening with too much sugar, a late night, getting up early, and some drainage from some stuffiness meant an upset tummy this morning.  I wasn't too worried until she refused to eat a waffle.  She did finally eat some apple slices and then perked up.  But she was also asking to stay home, was laying in her bed, wanted me to pick her up right after school, wanted me to come have lunch with her.

But after the apple slices and some water, she perked up a bit and went off to school.  I could tell she felt better but that she wasn't 100%.

For Zach, he was just sad.  He held it all together until after we had taken Teagan to school and we were driving to his school.  He sounded so sad as he asked to stay home... asking if he could be "a morning friend" (a child who only comes to the morning session at school)... saying he likes home better than school because he can play anything he wants or he can just lay in his bed.

Today was a special day at school - Dress Like Your Favorite Book Character Day.

Historically, we are terrible at this day.  It's usually a last minute thing and we are usually struggling to figure out which character to dress up as.

This year, we started talking about it earlier in the week.  The top ideas were to dress like an artists (he is a great artist and loves to draw and color and his teacher has talked with him a lot about the artists they read who start by making pictures and then write stories around the pictures) or Corduroy (we don't have any overalls, though).

Last night, he decided that he wanted to dress up as Daddy.

Thankfully, we have a book that goes perfectly with that idea.  So we found a button down shirt and his jeans.  And it turns out, his outfit was almost exactly like one of the pictures in the book. 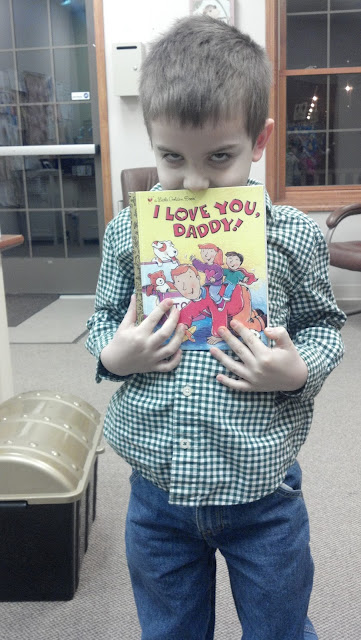 He was so sad when I left.  It broke my heart.  He just wanted to be with me.  He gave me the longest, sweetest hug.  He was trying so hard not to cry.  But his sadness was all over his face.

Even the dog has made it known that she doesn't like this change in her routine.  We had a poop incident that was very clearly a statement of her displeasure with her day.