I Am An Autism Mom

I've known Karla for several years now.  She is part of my church family.  I've watched her kids grow up - and I've watched as her journey has unfolded.  One way that Karla and I have a special connection is that we sing together - there is something about singing with someone that puts a unique spin on the relationship.

I am an Autism Mom.

But then that perfectly developing, lovely little boy slipped through our fingers and into autism. Initially, he was given a brand-new and exciting vaccine. And then further and further he backslid after each round of shots thereafter, until he was a terribly sick little boy that couldn’t look us in the eye, couldn’t play with other kids, didn’t speak, and didn’t grow.

We fought for months to see a doctor to give us a diagnosis and a plan on how we could make him well. Only to be told that there was nothing we could do. That he’d never be well. He has autism, after all. And everyone knows there’s nothing that you can do for autism. Just like everyone knows autism can’t be caused by vaccines.

Except it was for my child. My Sam was vaccine-injured and now had autism. And I refused to believe there was nothing I could do about it.

We started addressing all of Sam’s medical problems and began an intensive behavioral therapy program. We learned so much about the medical side of autism and behavioral interventions. And Sam improved. And continues to improve every day. He’s growing, and learning, and talking (non-stop!), and playing, and loving.

During the time we’ve spent working to improve Sam’s health and modulate his behavior, I have also become an outspoken advocate. My child was vaccine-injured, and if his story can prevent even just one family from going through the pain that we’ve endured, then that is why I continue to speak his truth. Because of that truth I speak, I have been called stupid, reckless, foolish, uneducated, illiterate, irresponsible, and even once a baby-killer (yes, really). Because Sam’s truth is that a vaccine reaction triggered his autism. And I have learned that thousands upon thousands of other children share that truth.

Of course I have heard the doctors on television that have convinced most of the American population that there are all kinds of studies that prove there is no link between vaccines and autism. But I have read those studies – yes, actually read the science – and there has not yet been one study done that addresses Sam’s truth. And it has been my prayer since the day that we learned Sam’s truth that someone, sometime during the life of my child, would say “enough is enough” and demand that proper studies be done.

And someone finally has.

On April 25th, in the most bipartisan of efforts, Representative Bill Posey (a far-right leaning Republican from Florida) and Representative Carolyn Maloney (a far-left leaning Democrat from New York City) sponsored a bill called the Vaccine Safety Study Act, noting the massive increase in required childhood vaccines, the corresponding massive increase in cases of developmental disabilities, including autism, noting that a study comparing vaccinated vs. unvaccinated populations has never been done, and demanding that such a study be objectively undertaken.

Over Memorial Day weekend, I was privileged to listen to a Congressional panel at the AutismOne conference in Chicago where Congressman Posey spoke about the introduction of the bill and its importance in the future of our country – because the health and safety of our children IS our future. He was joined by one of today’s most powerful Congressmen, Darrell Issa, and former Congressmen Dave Weldon and Dan Burton. And they all spoke Sam’s truth. No matter how many names we’re called, no matter how many highly paid and pharma-connected doctors attempt to say otherwise, as parents, we know. We know what happened to our children. And now Congress – even if a small fraction of Congress – is joining us in speaking our children’s truth.

Now, the “experts” give the bill about a 4% chance of making through committee, and a 1% chance of getting enacted. But its in Congress. And they’re listening. And talking. So more people will listen. And maybe just one person reading this blog will decide there must be something to all this if Congress is taking note. And maybe that person will read the science. And learn something she didn’t know before. And take precautions with their own child. And maybe that child will have avoided slipping into autism.

And that would be another prayer answered. 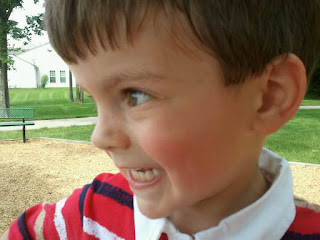 Labels: It's Your Blog

Thank you for sharing your story. I hope things get better and better for your Sam.

I could hsvevwritten this myself. I am another of liz's longtime friends, and have a two year old I am recovering from vaccine injury. I will follow your blog. The link to mine will be up on Tuesday. :)