Paula Deen and the "Horrible Lies"

I've got some thoughts on this whole Paula Deen debacle.

When she tells the occassion of the bank robber and her use of the n word... in the deposition, it comes across like she's trying to joke about it, make light of it.

Paula's biggest grievance is that she ignored the evidence all along... she was told about concerns and has turned a blind eye to it all.

She claims a lot of ignorance in that disposition.  I don't buy it.

I believe things were said to her many times, both in passing and in more serious meetings, and she most likely just brushed it off.  You can see that attitude in her deposition.  She makes light of men telling jokes about race, about women, about Jewish people... it's expected, it's normal, her husband does it, etc.  So when Karl Schumacher, Paula Deen's accountant and then manager of Paula Deen Enterprises, came to her and told her about the complaints coming in regarding Bubba's behavior... I can see where she would have brushed it off as "Bubba just being Bubba."

Paula makes it clear in the deposition that she believes that Karl and Lisa Jackson are out to sabotage, are jealous, are out to get them.  Karl - the same man that she has referred to as "the most moral man I know" and who she tries to throw under the bus in the deposition by flinging her own accusations against him.

So Bubba was carrying out the sins.  But Paula was turning a blind eye.  And with Paula being the public figure, she is the one who will be the focus of the blame.

There is a quote I've heard a few times lately... "All that is necessary for evil to triumph is for a good man to do nothing."  And the Bible has many verses and proverbs about confronting evil in our lives - like Proverbs 22:3 The prudent see danger and take refuge, but the simple keep going and pay the penalty.

Paula Deen tried to be simple.  She tried to stay focused on her own course and ignore the sins of her brother.  She wasn't the one saying or doing those things, right?

And I know that is up for debate.  I can't speak to whether or not Paula is running around saying racist things or telling racist jokes.  This is really just about that deposition.  The media has a death grip on Paula's story about the bank robber and her use of the "n word" and there is a lot of talk about this "plantation wedding/restaurant" idea.

But as attention grabbing as those things are... I think we miss the bigger picture and the actual mistake when we focus on those things.

But she doesn't see what she did wrong.  She isn't yet able to look at the events of the past few years and see the mistake she made.  If she can't see the mistake, there is no way for her to sincerely apologize.

And what I hope many people will come to understand - this is exactly why racism and sexism and other isms remain alive and well.  Paula's entire attitude is the attitude that so many carry.  First part is acceptance - "boys will be boys" and "men just make those kinds of jokes" and "that's the Southern way."  Second part is choosing to put on blinders - "I'm not the one saying/doing it" and "I find that hard to believe."

Knowing that your brother has grabbed a long time and "cherished" member of your staff by the arm and violently shaken him and screamed at him in front of witnesses... and doing nothing...

Ignoring memos and reports and brushing off conversations brought to you about your brother's behavior and words... doing nothing...

Doing nothing is exactly what allows racism and sexism and ignorance to keep on breathing.

I don't have anything personally against Paula Deen.  I don't know her.  I've enjoyed her cooking shows, her goofiness, her charm.

But this would be a very different news story if her deposition had been filled with her accounts of meetings with her staff, conversations with her brother, attempts to right the wrongs, acknowledging the bad situation and demonstrating what she did to try and amend it.

I just see this as an example of the undercurrent of our country, our society.  We want to make light of jokes that hurt, we want to cover up bad behavior, we don't want to bear responsibility for the choices of our friends and family, we don't want their bad light to shine on us, we don't want to get involved when we see wrong.

We want to put on blinders, plug up our ears, cover our mouths and hide under the blankets.

Except that doesn't work.

We've taken "Hear no evil, see no evil, speak no evil" too literally. 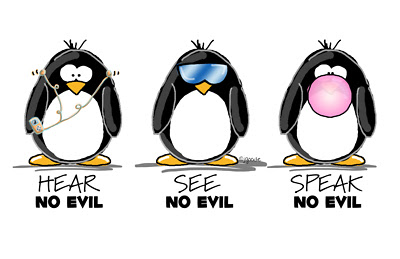 The lesson I've learned from Paula... is that I have to be brave enough to acknowledge when I've been wrong and I have to seek forgiveness where it matters (the media is not that place) and I have to be strong enough to stand up and fight when I hear or see evil.

This is so true. Great job

I can't help but think that the food network also had on blinders. This kind of behavior can't happen without anybody talking or word getting around. I'm sure they ignored it as long as she was making money for them.

I love it!! I totally agree about us as a society we do put on blinders. It's sad. I read a month ago that a HS in the south has a segregated prom and this is the 1st year people (not the school) organized a combined prom. Isn't that insane? In this day and age it is unimaginable.