The original plan had been to reveal the trip on April Fools Day. But then we would be leaving the very next day and my gut just kept telling me that it wasn't a good idea. For lots of reasons.

Then it hit me - Easter is a week before the trip. Why not do the reveal as an Easter thing?

So we put it together. And I guess it's kind of an Easter thing - except we aren't doing baskets. Instead, the grand prize will be a Mickey (for Zach) and Minnie (for Teagan) tote bag with Disney shirts, books, and gift cards. The games leading up to getting the tote bags will reveal clues to help them figure out that we're going to Disney World. 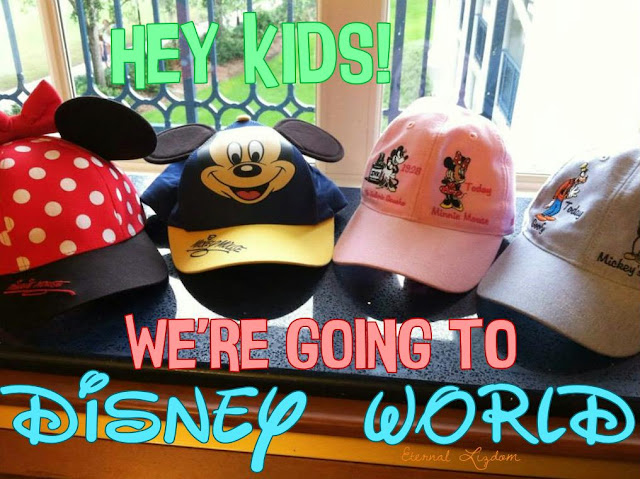 Here is the plan.

They wake up Easter morning. Once we're all out of bed - and there aren't any Easter baskets around - we hand a clue to Teagan and ask her to read it out loud. They take turns receiving the clues and reading them out loud. The final one gets them dressed and headed outside (hopefully).

Notice - these are all in "Disney" fonts.

My kids are fans of a game show on Nick called "Paradise Run." So the outside portion of the reveal is loosely based on that show. There will be 3 team challenges and then a final puzzle. Each prize earned gives hints of the big prize.

Challenge #1 The Cotton Bowl. Move a pile of cotton balls from one bowl to another using only a straw and your mouth!  Prize - a picture of a hotel.

Challenge #2 Chalk Art. 1 person has the picture, the other has the chalk and can't see the picture. The picture holder has to describe the image to the artist and the artist has to create it on the driveway. Prize - a picture of luggage.

Final Challenge - the kids are given a stack of words. They have to put the words in order and then guess what the clue means. The clue is: "Not in our house... but it all started with a mouse!"

Once they guess "We're going to Disney World," we hand them their grand prize tote bas and tell them that we leave the next weekend! WAHOO! I'm hoping we can capture video of the fun - and I also hope we wear them out a little bit first thing in the morning.

I'm looking forward to sharing all the plans with them, getting their input on things, showing videos of rides, and no longer having to hold my tongue every time something Disney pops up! I've kept this secret for 6 months and the excitement is overwhelming!!

Edited to add the video of our reveal!!