Proof that Cincinnati is the Queen City

This post is not for those who don't appreciate sexual humor. You've been warned. And have now been put in a mindset you hadn't anticipated. You're welcome!
Cincinnati is known as The Queen City. There are historical reasons and many assumptions. But it is a name that is used often and proudly. While at the Museum Center at Union Terminal on our mini-vacay last week, we came upon 2 items that we believe proves the nickname. And we think there must be a hidden history behind the nickname... because it seems pretty obvious there was serious longing in the history of the city. The first pic is a large tile mosaic that surrounds a large portion of the ceiling when you first enter the terminal. The second pic is a collection found behind glass in the depths of the cave in the Natural History Museum. See the pics and form your own opinion. 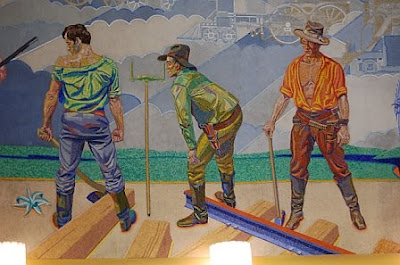 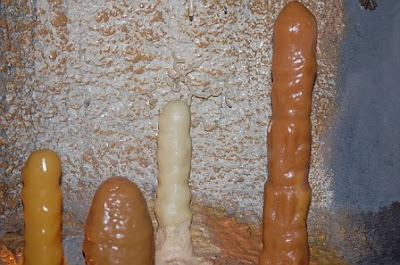 Homos unite! You know, even without the 2nd photo, I would have clocked those 3 as being gay. 1 bent over, the other eying his ass, and the other just looks gay with the shirt half off his shoulders. Oye.... oh, and I love it.

Poor me... I only saw surveyors in the mosaic, but what do I know. As for the second pic: me likey! Awesome variety.

Jeff was the one paying attention to the mosaic above our heads... saw those guys and said... "Huh. So that's why it's called the Queen City!" We all cracked up... A friend here in Indy saw the pics and said she expected those 3 to bust out into "YMCA."

Love the just-so shirt drape. So ironic, when I remember the brouhaha caused by the Mapplethorpe exhibit back in '92 or so.

Oh yes! I very much remember the Mapplethorpe controversy! I was in high school at the time and very passionate about free speech and artistic expression. Of course, my parents wouldn't allow me to go see the exhibit so I can't really make an informed opinion.