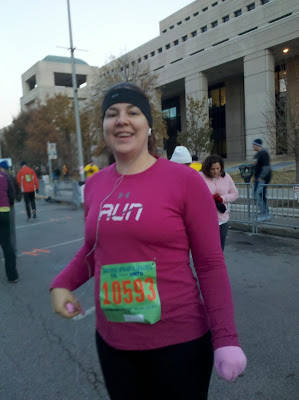 That is me before the race when I am still very, very, very cold and still not entirely sure how I was going to do in those very, very, very cold temps! I did that 5K and I might have kicked some booty on it. My official time is 42:22 but my friend Emily found out that was gun time. There might have been an issue with the start line mats and chips. So the clock started for everyone at the same time and ended when you crossed the finish line. Therefore, I think I can maybe take about 2 minutes off my time... but will stick with that officially recorded time for the record. I'll be sharing more about the race on Fit City later in the week but here are some of the highlights:

It was definitely cold. Instead of 25, it was a balmy 28 when we arrived. Brrrrr.... the sun coming up definitely helped. I reacted to the cold better than I thought I would. My breathing was fine, my upper body was fine. My legs hated it. My legs were sore and in pain more than usual. Of course, given that I was able to make a new personal record- either officially or unofficially- some of that pain might have been from running faster than I thought I could when I was running!

Christy and I rode down together in my van. When we arrived, she handed me a pair of running pants she'd picked up the night before. I was hugely grateful as I was not looking forward to exposing my shins and calves to that frigid air. I changed from capris to pants in the car. Stepped out to see how they fit... too big! The size Large pants were too big!! Thankfully, she had bought a second pair in Medium. I held my breath, really not thinking it was going to fit. I now wear size MEDIUM RUNNING PANTS! That is INSANE!

During the run, I observed several moms and daughter running together. There was one girl who was fighting it the entire way. She was a little on the heavy side and we hadn't even gotten to the 1 mile mark and her mom was having to really encourage / pull her along. I wonder how it turned out for them? I saw plenty of girls who were very excited to be out there running with their moms (or aunts or whatever).

Cheerleaders on run routes are SO IMPORTANT. If there is ever a run in your area, I would seriously encourage you to get out there and stand on a corner and cheer like crazy for those people running by. There were times that I was starting to falter and then I'd come upon someone cheering like mad and telling me to dig deep and encouraging me to keep going... and I'd find a little more run left in me.

Christy and I decided to share that cheerleading encouragement on our drive home. The event is a half marathon and a full marathon. This was the inaugural year for the 5K. The 5K runners were done waaaaaay before the marathoners, of course. As we tried to get out of downtown, we kept hitting closed roads due to the run routes. At some intersections, traffic was directed by police officers when there were breaks in the runner traffic. When we had to sit at an intersection waiting for runners to go past, we would put the windows down and cheer and hoop and holler like mad. As we finally got on the main road to head away from downtown, we were heading opposed to the runners! They had half the road, we had the other half. Car traffic was going VERY slowly so we had my window down and we were cheering and yelling. I was hoping I had a pompom from Teagan's Halloween costume in the car but I didn't see one... but I did find Zach's stuffed Ernie doll. I grabbed Ernie and held him out the window while yelling "YAAAAAY!" So many of those runners LOVED it. We started getting big grins and smiles and waves and people pointing and yelling hello to Ernie. I started having Ernie give "thumbs up" and blow kisses at the runners. It was a serious blast and I hope that I have a chance to be a race cheerleader again sometime- it was awesome!

Christy and I ate afterwards- we had to head out of the city because there was no parking anywhere downtown so I couldn't hit any of my spots down there. We went to a place called Le Peep. I haven't been there in years- it was SO GOOD. I had La Jolla Benedict- english muffin, poached egg and hollandaise on top and in between was mushrooms, garlic, spinach, a splash of balsamic vinegar, and tomatoes. It was heavenly!

On the drive down to the race, Christy and I shared a little bottle of 5 Hour Energy. I used that stuff the day I stayed home and did all that cleaning to create the play room. I took the entire bottle that day. I took half a bottle today, as did Christy. I wanted something to prevent me from getting a caffeine withdrawal headache later on and I didn't want coffee because sometimes coffee requires having a bathroom closeby after consuming it. Ahem. Christy and I both think the 5 Hour Energy helped keep our energy going as we ran- we both had a very positive sense of our fuel through out the race. I'd forgotten we'd even taken it until she brought it up at the restaurant!

I have way cool mementos from this event. I have the typical tee-shirt. I also got my first ever participant medal! And I have an event poster that has my name on it! The poster has names of thousands of particpants printed on it in very tiny, very light print. So cool!

So it went well. Christy and I both beat our previous run times and both did really well. She was able to run about a 10 minute mile for her average race pace and I kept under a 14 minute mile. My next event will be a Virtual 5K for the 500 Mile Challenge- participants run a 5K at any time they choose out of a 2 or 3 day weekend. Then we all report our time to each other. After that... not completely certain. But you will be one of the first to know!! And did I mention that I actually full out sprinted for the last 10th of a mile (maybe a little less than that)? I kicked it into high gear and barreled through! Yay!

Liz. You look fantastic! Your shirt is clingy and shows of the curves. Va va va voom!

Congratulations! You're an inspiration to me. Keep up the good work.

Excellent news! So glad for you that it went so well. Now there's no reason to fear the cold this winter. What a great example for your kids.

My word verif: frenesia: when you're so frenetically running you forget about the cold?

You rock, Liz! Congrats to you and your friend!

(Like toll fares, bandaids and chocolate, always keep a pom pom in the car!)

Love that you did this!!! You inspire me!!

When I read the title "I Did It" all I could think of was...

Great job...I had so many of the same "hesitations" before I did the 4 mile run Labor Day weekend...cold weather and not sure how I'd react...then running faster than ever and having sore legs. BUT, you DID IT!!! And CONGRATS on the MEDIUM pants...woo hoo lady!

You are such a go-getter! If the temperature was anywhere below 45 I would be rethinking the whole thing!

Way to go. Today is our city's big marathon. I think I'll grab Diego and go cheer for a while!

What a wonderful accomplishment, Liz. Way to commit and hang in there despite the cold. Proud of you!

Yeah for you! That is awesome. Not just a great day for running, but it sounds like a good day for encouraging others and spending time with friends.

Congratulations! You should be so proud of yourself!