Ever have one of those days?

Ever have one of those days where you are really looking forward to something? Ever have one of those days that you are super excited about what's going to happen? Ever have one of those days where you've kind of imagined how it's going to be and what your role will be in it? Ever have that excitement and then have everything go completely opposite so you're left alone and feeling rejected and not special? My daughter experienced that disappoint- and I experienced that heartbreak. Yesterday, Zach started attending preschool at Little Explorers. We are careful not to call it "Teagan's school" since it now Zach's school, too. For the next couple of weeks, Zach will be in the child care program at LEP as we wait for school to officially start later in the month. Teagan has been very excited but also slightly stressed about Zach's transition to LEP. For a while, her worry was how would she know that he was ok. She and Miss Lori had an agreement- Lori would let Teagan know about Zach's day and if any help was needed, Teagan would be called on to help out with her little brother. Teagan has been both eagerly and anxiously awaiting the Big Day when Zach Would Come to LEP and Need Her to Help Him. But he doesn't. I called to check on him around 10:30. Zach was doing awesome. He fit right in and was making friends and playing and just doing great. Teagan on the other hand... was feeling rejected and hurt and it was coming out in big sadness and madness. One of the issues happened at snack time. Everyone came to the tables for snack, Zach plunked himself down in between 2 of his new friends and refused to move when Teagan asked if he would come sit with her. Thankfully, the adults at LEP are on "full alert" with Teagan this week. There are 2 HUGE stress factors for my girl this week- Zach starting school and that whole adjustment as well as having Daddy gone all week and next weekend. This is, traditionally, a hard week for her just having Daddy gone and pretty much out of contact for 7 bedtimes. When Lori told me what was playing out, my heart broke into a million little tiny proud pieces. First, so proud of my boy for being able to just adjust to this new situation and new way of doing things. Second, so proud of my daughter for being so invested in loving her brother that she's heart broken that he doesn't need her. But so sad that my girl is so upset when all she is doing is the exact right thing. So I thought about it... when I've had my expecations crushed, what do I want to help me feel better? A new pony? A barbie doll? Not so much... what I want is to feel special, to feel like I matter to someone, to feel important. So I wrote this little letter to Teagan and read it to her, privately, when I came to pick up the kids. 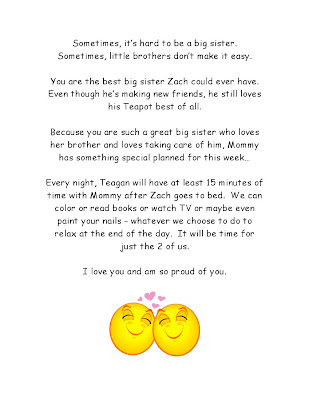 The smile and hug I received, the look on her face... I know it was what she needed. I see it as win-win. Hopefully, it gives her something to look forward to at the end of each day. But the major bonus is that she and I will have time together each evening. Even if there has been a meltdown about bathtime or a fight over ketchup- there will still be at least 15 minutes where we sit together, just the 2 of us, and just enjoy being together.

Last night, we ate dessert together and then worked on a little coloring and craft project. Beditme wasn't perfect when we were done- but I still had time with my daughter that I cherished and that meant the world to her.

How about you? What letter do you need to receive- or write- right now?

What a great idea, and who knows? Maybe you'll both love it so much, you'll keep the new tradition :)

Aw, spot-on! see, you know your dd better than you give yourself credit for sometimes :)

I think I need a note that says, "mom, I'm sorry, and I promise I'll never call you that again"

Okay, that made me cry.

Glad I'm not the only one that cried!

Great job Liz! I have alot of bigchanges happening around me, including my BF moving 9 hours away...so I guess I need a letter saying I won't be forgotten...

Well done, Momma.
You're learning on the hoof, and doing so well!!
Hang in there!

I'm late to the party. But that's ok because by being a few days late I can say that I got a letter from Annie at camp yesterday. I was really missing her, so the timing of the letter was perfect! Sounds like she's having so much fun.