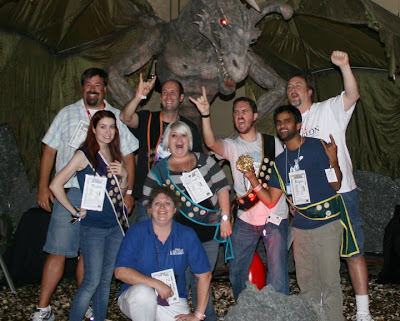 Pic courtesy of Fotoz by Fritz (Carbondale, IL)
Now that he's home, he can de-stress. It wasn't as much fun as previous years because he had to pick up a lot of unexpected (and rather surprising) slack. Now that he's home, I can call or text him at any time and know he's right there. I can look across the living room and smile at him. I can reach under the pillows and hold his hand at night. Now that he's home, life is back to normal. Life is good.

Trying to bask in some kind of reflected glory here...it's not working. Lucky, lucky bastard.

It's a shame Jeff's enjoyment of GenCon was tainted by the stress thing. I hope the awesome outweighed the bad stuff on balance. It's hard work helping other people have fun!

The awesome definitely outweighed the stress. Having Felicia Day tell him he was funny... I think he's still over the moon on that one!!

Oh yeah, that one's going to have currency for years!

Did you change your blog recently or do I just always read it in my Google Reader? Anyways, I like your stamp/image.

I also love how excited you are about what he does, even if you don't quite have the lingo down. I couldn't really tell you what it is that my husband does either, at least not using correct terminology.

Very cool!!! I was a huge Star Trek TNG fan growing up, and my husband is the biggest gamer there is, so I understand all that gamer lingo. glad your hubs is home safe and sound! (and that he got an awesome experience w/ Wil Wheaton. :))

Very nice.
One of the kids in my GenParty was actually named for Wesley Crusher. That's pretty cool....

Cool to see you there--and glad that you remember faces much better than I do!!!

"The DM’s in the rooms are the “guides”. (Don't ask me what DM actually stands for. Dungeon Master? Dungaree Manager? District Mover? I dunno..."

I'm not sure if I should be embarrassed or proud that I understand all the gamer terms...

I LOVE The Guild and met Felicia and Robin at a DVD signing event recently. They are super nice girls. I'm glad Jeff got to spend some time with the cast. I've heard they're all a lot of fun.

I'm also glad for you that you get your hubby and your rest back!