I had a great weekend.  But there is a highlight- something new to me.  Something I have never ever done before but hope to do again someday.

Saturday morning, I played in the mud.

More specifically, I did a 5K that involved water, mud, ropes, cargo nets, climbing walls, running tires, under and over ropes, and getting downright dirty!

My friend Emily and I did the Dirty Girl Mud Run together.  And we got dirty!  The best part about this event, for me, was that the obstacles were placed so that you never had to run or walk very far- it wasn't a 5K distance thing.  This was more of a general fitness event and you had to travel from obstacle to obstacle.

While the website gives you a general idea of what some of the obstacles might entail, I think it's really cool that they also work with the lay of the land and create obstacles based on what's there.

I had hoped that I would remember every detail in order to share it- but I just got caught up in having fun.  I'll share what I can, of course.

Friday night, I hit Goodwill.  If I was going to ruin some clothes, I didn't want it to be anything that I considered my "good" workout gear.  So I ended up with a pair of bright pink flowered shorts, a yellow sports cami, and a bright yellow tank (with silver lettering to showcase the different neighborhoods of NYC).  I was a true fashion plate, I tell ya. 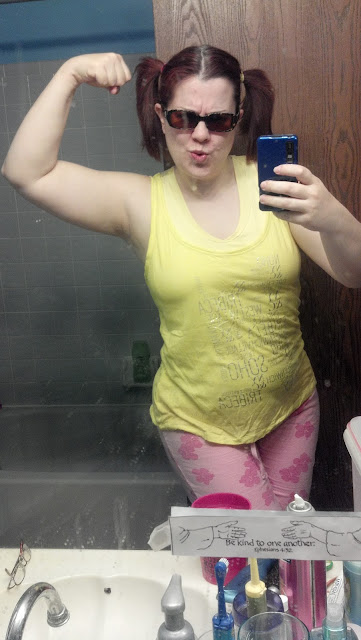 The shorts and the tank?  Well, they didn't survive.  More on that later.  I am keeping the sports cami- even though it is now a mud stained sports cami.

For shoes, I wore my Merrell Barefoots.  They rinsed well and got tossed in the washer and are fine!  Love those shoes!

So Emily and I arrive, get registered, hit the porta-potties (yuck), check our bags into the bag hold area, and go watch one of the earlier waves start up.


Before we know it, we are in a group of women, we seem to be 2 rare individuals in a sea of teams (note to self: form a fun team next year!!), and we are off!

First obstacle was the hay bales.  Big mountain of hay bales with a wave of women climbing up and over and making their way back down.  Then on to a dry set of tunnel/tubes to crawl through.  As the course continued, we went into mid-thigh high dirty water, over and under a web of ropes through some trees, into a waist high creek and up a muddy bank with a rope to assist the climb, up and over a cargo net, up and over a climbing wall, running tires as if we were football stars, and climbing through a tunnel set in muddy water.  Just before the finish line, we jumped into the muddiest of the water pits and soaked up as much mud and dirt as we could before crossing the finish and getting a pic snapped together!

There were some issues and areas for improvement.  This was the inaugural event in Indy so there needs to be some improvement in working with the venue, primarily.  There was one issue on the course itself with one of the creek crossings- we had to wait in line to do the obstacle for about 30 minutes.  This was at about the halfway point and was a real let down to the pacing of the event.  Em and I made the best of it by having fun with the ladies we ended up in line with, of course.

With your registration, you get a drink ticket to toast your accomplishment at the end.  We couldn't seem to figure out where exactly to go to get the drink but I later learned you got a warm can of generic light beer (when I say generic- I mean Miller or Bud or something like that).  To buy a beer was $11 or you could buy a margarita for $8 or a bottle of water for $5.  That was all venue pricing and those prices were not appreciated by the event goers.  Em and I opted to not spend any of our money at the event- even bypassed the stand selling Dirty Girl clothes and souvenirs.  By the time we reached the point of being ready for drink and food, we were kinda frustrated.

The event is supposed to offer a shower area and changing area.  The changing area was a wide open type of space where women just stripped down to nothing- which was fine except there were venue employees who would wander in and out.  The water situation failed because the water pressure wouldn't allow the water to travel up the hoses provided.  If you picked up a hose, the water stopped coming out.  So everyone was trying to crouch or sit by the PVC pie carrying the water and trying to rinse gallons of muddy water off and out with a handful of water at a time.  Completely inefficient.  I ended up tossing my NYC tank and my pink shorts at the venue and came home in muddy undies and my sport cami with my lower half wrapped in a towel! 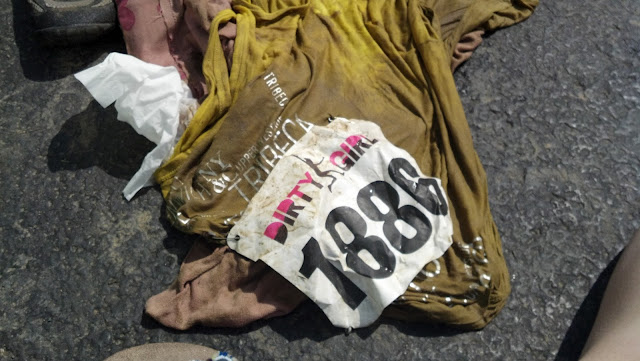 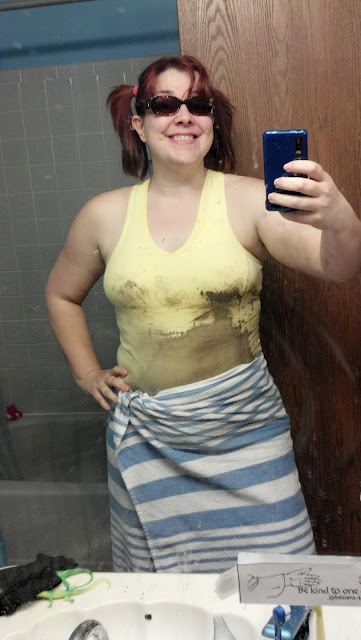 Got home and took a loooooong shower.  Had to scrub places on my body that haven't seen that kind of dirtiness before!  Even after a good soak and a lot of scrubbing, my toes were not coming clean.  My shoes are a no-sock shoe so maybe I took on more mud than others?  But I finally had the motivation I needed to get my first pedicure in almost 5 years.  And it ended up being a great way to kick off Mother's Day weekend because Teagan came along for her first ever "real" pedicure! 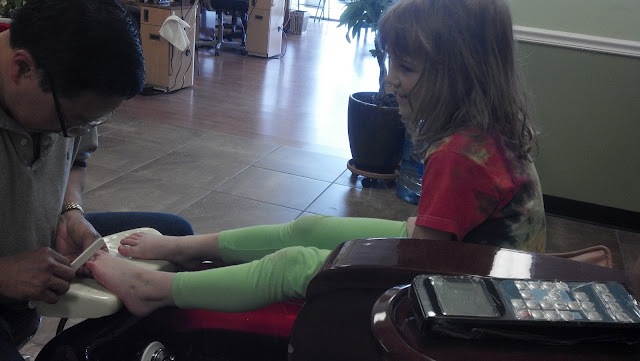 This is definitely an event I would do again.  It was serious fun and any excuse to let go of tension and stress and expectations and just get into a mud pit to roll around is a good excuse in my book.

I really want to do a mud run sometime! Glad it was so fun for you!

That sounds like so much fun! There is a similar event here - maybe I'll do it next year. I love the first picture; you are rocking it!

I love that Teagan had a pedi!

So glad that we did the race(er, run) together- despite some of the operational challenges! Definitely one I want to do with a big team next year! I also think the whole team should have "hand prints" like you gave yourself and call ourselves the "Grabby Mudders" ;)