A Year With Frog and Toad 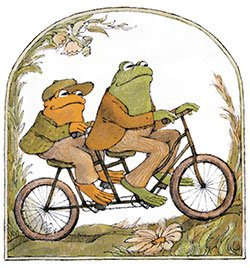 It was her first time. It's always easy to say it is. But this will be the first "big show" in her memory. I previously took her, when she was not yet or maybe just 3, to see a children's presentation of Winnie the Pooh at a local dinner theatre. She's seen 2 shows at The Children's Museum- Sleeping Beauty, most recently.
Last night, we went to see a local high school presentation of "A Year with Frog and Toad."
This was inspired by our recent community theatre exposure.
It's odd to sit in an auditorium filled with people who are there primarily because they know someone in the show or are otherwise affiliated with the school and not be part of that circle. But it was also nice to not be distracted with having to be friendly or outgoing amongst a group of peers. I could completely focus on Teagan and the show.
Nice sized auditorium, nice sized stage. Not huge, not tiny. I'm used to tiny in community theatre. It's easy to forget that high schools usually have budgets and technology that the rest of us don't have. So consider this my endorsement for supporting your local high school's performing arts. While it may be a disaster... if there is a good program, there is almost always great talent and passion. So it's an economical way to see a show. And appreciate your tax dollars at work!
We had one person sitting in front of us, no one next to us, and were seated on an aisle. We did have 3 teen girls sit behind us who were mildly annoying with their ongoing commentary about the kids on stage and how great they are, how nice they are, how sweet they are. Better than if they'd been snickering and being cruel, though!
The show opens and she's hooked from the moment the lights come up. There are birds on stage. The girls are in color coded outfits- boas and tights and fluttery things. The boys are "Thunderbirds" (like from Grease). They sing about it being the end of winter and about Frog and Toad being friends and neighbors and about to wake up for spring. Frog sings about his dreams, Toad about his. And then we start into various scenes that are very familiar to anyone who has read the books.
Fantastic casting. Frog had mannerisms indicating his gangly limbs and no-nonsense ways. Toad was more laid back and quick to act on impulse. Both young men had fantastic voices that really lent to the characters. The show, like the books, is sweet and simple and very real to the ways of young children. This production held on to that innocence and to the focus on friendship nicely.
One of our favorite characters was Snail. Frog is very sad that Toad is sad because he never gets any mail. So Frog write Toad a letter and asks Snail to deliver it. We then have brief visits from Snail throughout the show as she works, at her speedy snail pace, to deliver the letter. This young woman had this character down pat and really brought her to life with a lot of humor. Plus her voice was spectacular!!
We enjoyed every aspect of the show- it was a very large cast and everyone seemed to really enjoy what they were doing. From the buzzing bees in their black and gold flapper dresses to the elegant flowers in the green evening gowns and flower brimmed hats to the red clad piles of leaves that dances about to the really cool underwater ballet done with neon fish and jellyfish and octopus in black light... it was all fun and colorful and truly magical.
And that's what matters. The magic. I wished I could have gone backstage before the show to speak to the cast. To tell them that my baby girl is out there watching and that this is the show that may well stick in her memory as The One that got her started in theatre. That they will be creating this fantastical imagined place that will be very real to her.
But I didn't need to say any of that. Because it happened. These kids are dedicated to this craft and their passion came through in shining colors and costumes and dancing and songs. As an actor, a director, an audience member... I couldn't have crafted a better show to really introduce my daughter to all that theatre can be. As Teagan put it...
Me: "What was your favorite part?"
"Everything!"
"Who was your favorite character?"
"All of them!!"
"What was your favorite song?"
"All of them, too!"
Many thanks to the students of Cathedral High School. While this may have just been a spring production for you... it was the start of something big for a little blond girl in row P, seat 10.
Labels: parenting, Teagan, theatre

How great that you are exposing Teagan to theater at such a young age - and even greater how she is responding with such delight.

I didn't get a lot of that culture as a youngster. Our school used to have assemblies with traveling puppet shows (which I could never get enough of), but the first "professional" performance I ever saw was in Junior High when we went on a field trip to see a visiting opera company's production of Tosca.

But I loved it anyway.

Maybe someday your little gal will be a rising star and she will owe it all to you.

Aww, I am so glad that T had a good time. I have tears reading about her experience. I need to take Delainey to something. She loves singing and dancing, I think she would love to see a live show!

It sounds like a wonderful production, perfect for a first time :)

I'm trying to remember what my first theatre experience was. I know I saw a puppet production of "The Magic Pudding" which I think was at the Sydney Opera House when I was fairly young, and the first musical I went to was Joseph and the Amazing Technicolour Dreamcoat which was before I went to High School. My nana took us to see Hamlet when I was young enough that I remember the lollies we got as much as I remember the play.

We took Caitlin and David to see the John English version of Pirates of Penzance when Caitlin was 3 and Dave was 4. Cait sat transfixed through the whole show and remembers quite a bit of it still - particularly the part when the Pirate King swung out over the audience on a rope, we were quite close to the front so it made quite an inmpression. David ended up lying on the floor from memory!

We need to take Diego to a play. Thanks for the reminder. I'm glad you had a great time.

Go ahead and shoot me. I tagged you with a meme on my blog.

I am so excited for T. That she gets to start her passion so young. Being a show choir nerd myself, I cannot wait to have little ones and cultivate their passions in the arts!

What a GREAT experience! I bet Chickie is at the age now when she'd really enjoy something like that. I'll have to find an appropriate show.

Yesterday we had sitters (a couple of sisters--one is just learning to babysit, the other is older) and went to see Grease! onstage with some friends. It sure made me want to be back onstage.

Just the way you described it made me want to go see the play and I am not a big fan of musicals. I may have to check out our local high schools next drama performance.