I know that everyone has been eagerly anticipating stories from Teagan's first days at school, right? Pins and needles, I'm sure! First- something I love. Our first in-home daycare provider did a similar little sheet to this one every day. It let me know about what Teagan ate, if she had any problems, and about her diaper habits. Lisa doesn't do that sheet, which is fine. But I didn't realize how much I'd missed it! Teagan now gets this full sheet from school that tells me what she eats and how her day has been! 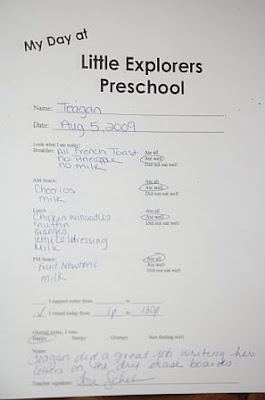 My girl is an over-achieving people pleaser. We've seen this competitive edge come out in dance class. It isn't that she wants to be better than the other kids. But she is certain to do her own personal best. Hence, she wants to be first, answer first, etc. There is a reward system at school where the kids can earn "Wow cards" when they get "caught" making a good choice. Listening, helping without being asked, setting a good example... Tuesday, day 2 of school, and Teagan's little chart pocket was positively overflowing with Wow Cards. And little kids going to school just wouldn't be right if they didn't bring home oodles and oodles of art projects! 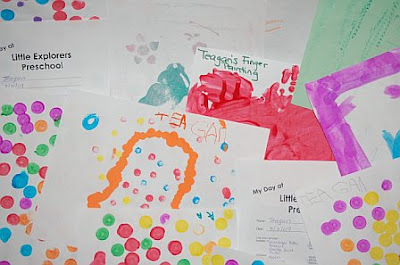 Teagan, as you can see, is most taken with the paint markers that make fantastic polka dots. 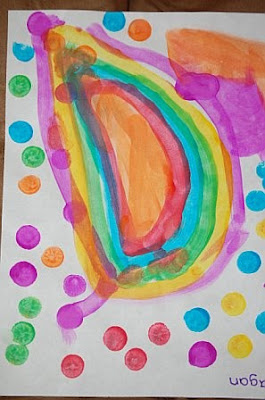 No, it isn't really upside down. She said she painted a big, colorful "D" for Daddy. It's for him to put in his office at work. 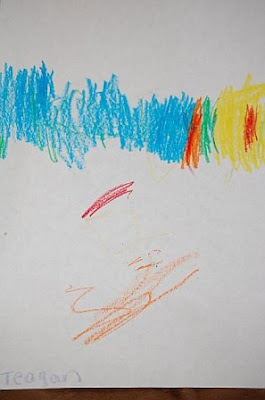 She said this one is a storm (we had a stormy day here on Tuesday- all day long). The blue are the storm clouds and the yellow is the sun.
They made a little book in school on Wednesday. So far, there are only 4 kids coming in every day for the full time program. More kids start next week. And pre-K officially starts after that (and that includes both full time and part time students). 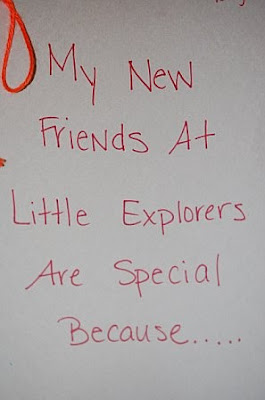 Each child gave an example of something that makes them special or of a time when they have felt special. Miss Tori, the all day program teacher, wrote out a page for each student for each book. Then it was up to the child to draw what the page said.
Teagan's first page: 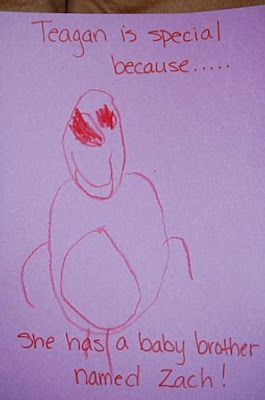 The drawing is of Mommy when I was pregnant with Zach. See- that's Zach in my belly. Melts my heart!!
Page Two: 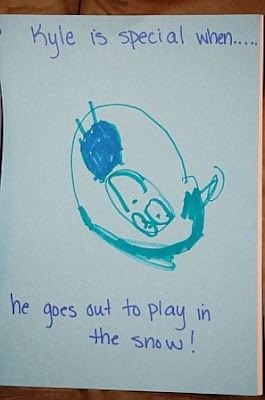 That's Kyle on a sled out in the snow! Page Three: 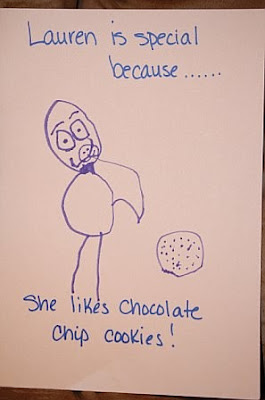 I told Teagan that she and Lauren ought to be great friends. Since Lauren likes chocolate and Teagan doesn't like chocolate, they can always share nicely! Page Four: 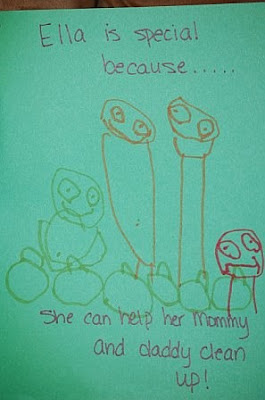 I have to admit that we had no clue that Teagan could draw people. She likes to color and write letters at home and hasn't ever been interested in drawing people. I'm really pretty impressed with her drawings and how well they depict what she was wanting to get across.
A couple of funnies to share, of course.
We picked her up after her first day and were going out to dinner to celebrate. On the way there, Teagan is telling us about her day and we are asking lots of questions. She stops, mid-answer, and declares, "I have to stop talking now. I need a rest. I've been talking ALL DAY."
I picked her up on Wednesday and she was the last child there. She and Miss Tori were playing with Mr. Potato Head. Apparently, I was the inspiration for Teagan's Potato Head creation. She had me wear a hard hat (she knows we "make" those at my work), gave me strong muscle arms, and glasses. Miss Tori asked if it looked like Mommy... Teagan says, "Um... turn it around." Miss Tori turns it to show the backside. And Teagan happily declares that yes, it does, indeed, look just like her Mommy.
Wanna know just how much Teagan loves school? Lisa is closed Thursday and Friday. Zach will spend Thursday with Jeff's mom and Friday with my mom. Teagan, without any prompting, has already announced that she wants to go to school those days. No Grandma... just school. School beats Grandma and Mimi? Wow!!
Labels: parenting, preschool

I don't even know Teagan but can picture her declaring, "I have to stop talking now. I need a rest. I've been talking ALL DAY."

I giggled at that.

What a great start!

My 4yo brought home her first picture of "people" (heads with legs really) yesterday and I made sure to keep it for the fridge! She told me it was a picture of the two of us.

Had to drop a comment and tell you that I'm pretty impressed with the artwork! Correct me if I am wrong, but there is some serious Geogia O'Keeffe influence in the "D" piece. :)