Day 2 was all about me, Christy, and later, Anne. No kids, no husband. Christy and I started out the way we traditionally do on this day of the Fair. It was Farmers' Day and it always starts with the Farmers' Day Pancake Breakfast. Proceeds benefit the FFA. The breakfast is pancakes, sausage links, and veal bacon. Coffee, juice, milk. And they set it all up outdoors on the Main Street area of the Fair. $3 donation (we traditionally give a few extra bucks since it's for a good cause). And the best part is that you then get to be there as the Fair wakes up.

Watching vendors set up their tents and booths, golf carts racing around to load up supplies, animals being moved here and there. We went and saw animals- sheep, looked for horses but the barns were empty (soon to be filled up with the show Belgians), pigs. We, of course, had to see the world's largest boar and pig and the prize winning litters. I don't care so much about the thousand pound porkers but I do love seeing the babies. The one litter had a special little friend for me. A piglet had come over to the side of the pen and I reached in and gave her a little scratch. She had been on all fours, actively rooting around in the wood chips. As soon as I started scratching on her, she goes down on her side and closes her little piggy eyes... zoned out. I stop scratching and she gets back up and starts rooting again. I scratch... she konks out. It was pretty funny! 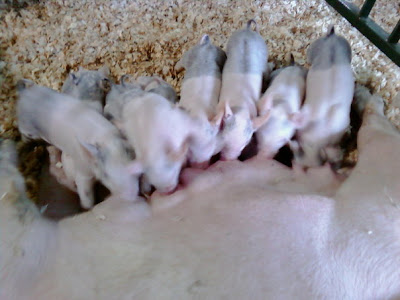 We then head over to the Grand Hall. This space always has a different special exhibit every year. Last year, it was focused on Indiana athletics and it included a space to sit and watch the Olympics. This year, the exhibit was Indiana Space Travel. It was pretty cool and we had fun with the interactive exhibits. I also got info on a local organization that does a mini kind of space camp for kids starting in 5th grade.

We next took the tram/shuttle to the top of the Fairgrounds. On our way, we saw part of the Farmers' Day Parade that takes place on the track (the inner part of the fair grounds is a dirt racing track and an infield). A couple of years ago, we sat and watched the parade... but couldn't watch all of it as it got pretty boring and was seriously long. So we discovered that riding the tram at the right time takes you past the old tractors and machinery as they wait their turn to go- a much better option!

We looked at some of the displays in the 4H building. This is where the 4H kids display their poster projects, art projects, rockets, and more. Very impressive work. One thing that I thought was cool was an ink drawing of the lead singer of Coldplay. The artist, a high school student, did all of the rendering with the band's lyrics instead of with simple lines. It was really cool.

Next we stopped by the DNR (Department of Natural Resources) building. Kids enjoy this building because of the display of Indiana lake fish. I enjoy the gift shop- lots of unique Indiana made items. Just outside of the DNR building is Goat Mountain. We stopped and fed carrots to the goats- always a favorite thing to do. Next we headed over to the Taste of Indiana Farms. We discovered this about 2 years ago, I think, and it has quickly become one of our favorite things to do at the Fair. You go through a planned route in this auditorium and stop at each table and you can pick up recipes, learn about the product, and sample it. Watermelon, honey, popcorn, lamb, elk, soybeans, tomatos (salsa), cheese, wheat. And it is a free event! Free food at the Fair!!

Next up was the Celebrity Milking Contest. They take local news-radio-TV type celebrities and each takes a 60 second turn at milking a cow and the person who gets the most milk wins. I've never gone to it before but I have to admit that it was a lot of fun. Christy and I hung out afterwards so I could say hi to an old friend (Bobbi- she works for the fairgrounds) and to one of the contestants (Lou Harry- he writes an Arts and Entertainment blog for Indiana Business Journal). We chatted up the cow handler and patted the cow. She was apparently suffering an identity crisis since they kept announcing her as Duchess... but her name was actually Elsie. She was a very sweet cow. At this point, our friend Anne joined us and our next stop was bathrooms and then food!!

Pork burger for me, bbq pork sandwich for Anne. Then a swing past the place with good brewed sweet tea and yummy shish-ka-bobs (amazingly moist beef, onion, peppers, mushrooms). We headed over to the Pioneer Village Opry House. This is a large barn that used to house tractors and antiques and such. This year, it became an entertainment venue. There was apparently even an old fashioned barn dance there one Saturday night! We wanted to check out Chelsea House. "Celtic with a Kick." What we knew was that it was a group of teenagers and they played Celtic music. But it was so much more! Yes- the base description is accurate. It was a bunch of teens and they played Celtic music. And it had a kick! The energy of these young people was absolutely contagious. The audience space was packed full. They were supposed to play a 30 minute set and went for a solid hour. So much talent... such a unique experience for them. Had to buy a CD and was just so hopeful and warm and fuzzied from the experience! I found this video on YouTube. It isn't the best depiction of our experience... but I recognize some of the faces... you get the idea at least!!
BONUS POINTS TO CHRISTY! She found a video of the performance we saw at the Fair!!
We raced over to see the Peking Acrobats. HOLY COW! Unreal feats of contortion and strength and such. Spinning plates and balancing on each other (all these tiny little Chinese girls)... 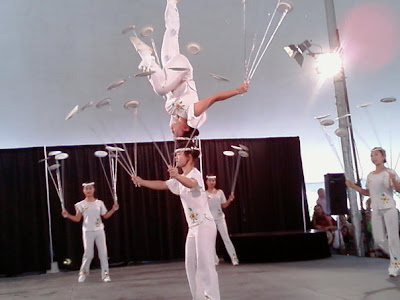 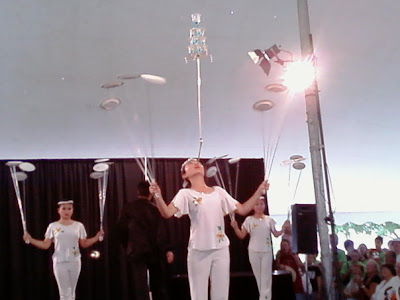 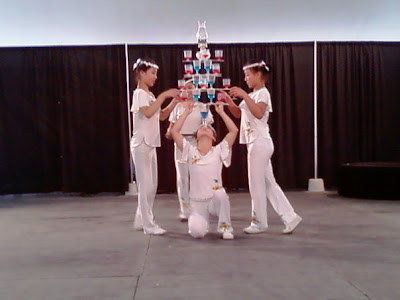 The pic above- after they put together this big thing of plexiglass and liquid filled glasses and she had it balanced on the bridge of her nose (and when it was over and dismantled and she took her bow- you could clearly see the impression from the weight of the objects), they assembled a little stage with a metal half circle rocking thing. She stepped up to the platform, onto the rocking thing, was handed 2 ladders that she held on either side of her, she stepped up so she was was then balanced in between these 2 ladders, on the rocking thing, on the platform on the stage. They tossed 2 long ribbons to her and she swished those around and then worked her way back down- all while balancing that stack of glasses and the hurrican lamp! 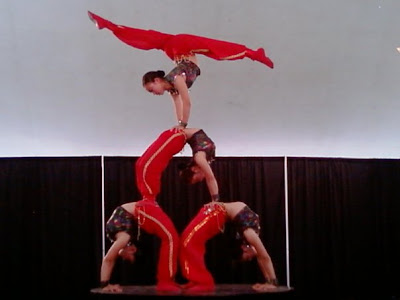 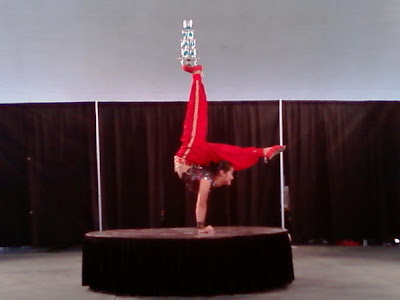 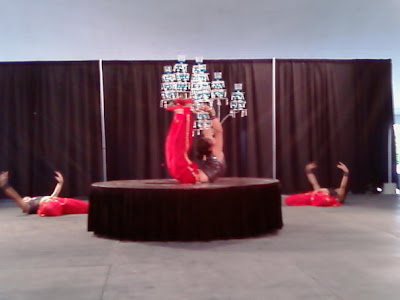 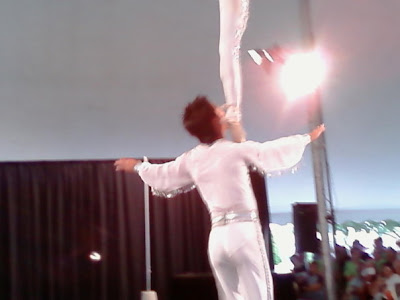 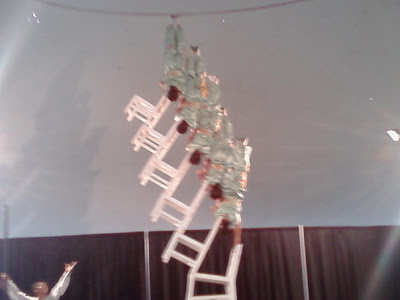 As soon as the show ended, the rain started. Huge down pour. We ran for a corn dog and then decided to just get wet. We walked over to the Pioneer Village barn- where you can see all kinds of antique equipment and appliances and there are kitchens set up and a general store and so on. We passed through to hear the dulcimers playing. Went to the DNR building for what should have been a cool thing about owls but was rather boring, in fact. So we grabbed the next tram and headed down to the south side of the fairgrounds again.

We went and saw the Belgians as they were being brought in... I apparently was wearing horse deterrent because they wanted nothing to do with me! It was kind funny. I finally found one horse who loved me for who I am and we bonded quite nicely. Until my allergies took hold and I had to rush to the bathroom to scrub my hands and arms and then head outdoors for non-barn air.

We hit the Dairy Bar and it was a bit of a fiasco. The Diary Bar is well known for being one of the best deals at the Fair. Grilled cheese sandwiches, cheese sticks, scooped ice cream, thick milkshakes, ice cold milk and chocolate milk. There are a variety of sandwiches to pick from and they are made ahead of time and kept in a warmer so it isn't like this is the best grilled cheese in the world. But because it is a Fair tradition... it's somehow better. Last year, they introduced a new sandwich- wheat bread and gouda. Oh how heavenly was this sandwich. And it was such a hit that they RAN OUT before the Fair ended!! Christy and I were looking forward to that sandwich this year. But when they hand us our sandwiches, the cheese is yellow. We ask about it and are told it is gouda. I've never seen gouda the color of cheddar cheese before. We push and are pretty told to screw off about it. We sit down and open up the sandwiches... definitely does not look, taste, or feel like gouda. It's colby. Christy and I "know" our cheeses. This was colby. Grrrrr...

One last stop for some corn (freshly shucked from a roasted cob and served in a cup) and a lemon shake up... and the end of my Fair had come. I needed to get home and get back into routine with my kids and be ready for work the next day.

All in all... a good Fair and I am still eager for next year! 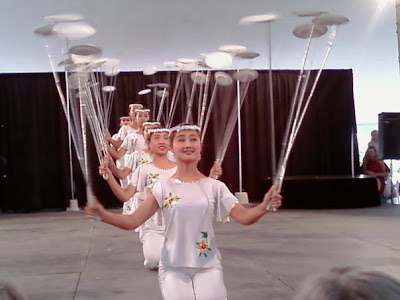 I know!! I actually went to this one local reporter who is attending the Fair every day and blogging about it... asked him to go on an investigative adventure... Christy was there again yesterday and she asked and they told her it's "aged" gouda. NOT. Aged gouda is NOT orangey-yellow and does NOT taste like Colby!!!! I knew I loved cheese but have seemingly tapped into a hidden level of passion.

Are you checking their blog to see if they blog about the cheese? (Like you have nothing better to do).

I'd LOVE to get the info on the Space Camp that you found. That would literally (and figuratively) be HEAVEN for my 5th grade boy. He just visited Kennedy Space Center for the first time, and was so full of questions and information, that one of the astronauts actually took him upstairs to the office to meet the others!! He (unlike his mother) is a real space buff!!!
Lori

When I get home, I will pull out the brochure I grabbed about the space program.

And yes!! The cheese thing made the blog! I'll post a cheese follow up shortly with a couple links...

Liz.... just watched the video. I got chills, they were so good! Thanks for posting it.