To Market, To Market

Did you hit a Farmers Market today? If so, write up a blog post about it and link up over at Flartopia! This morning, after a lovely breakfast at a local place called The Roost, Teagan and I headed to the Broad Ripple Farmers Market. It was opening day for the market- and also my first time visiting this one! The market is located in the parking lot behind a local high school. There was one large row, essentially, of vendors. Teagan and I decided to walk down and see everything and then make our purchases on the way back. The first thing that caught my attention was a booth selling starter plants for a large variety of herbs. I might have to do an herb garden this year- a potted thing on the back deck, perhaps. Easy access that way since the deck is right off the kitchen. This funny plant caught my eye- Hens and Chicken. It's similar to aloe, apparently. 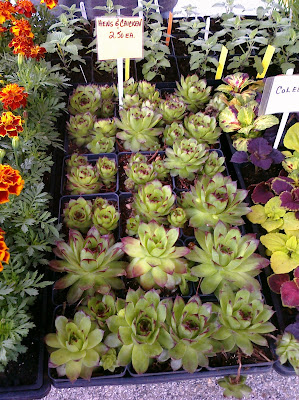 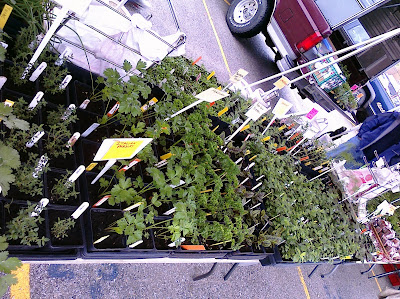 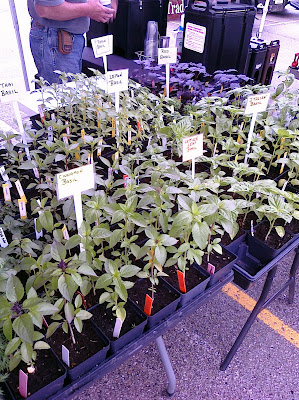 My first purchase was at this maple syrup vendor's tent. But I didn't buy any syrup! Instead, I found Bestcestershire Sauce (which I got to sample first and the sample convinced me to buy it) and also an amazing hickory smoked sea salt. They take sea salt and smoke it over hickory bark for 4 days. Had a sample of that- fantastic smokey taste that will be an awesome finish for pot roast, soup, and fish. 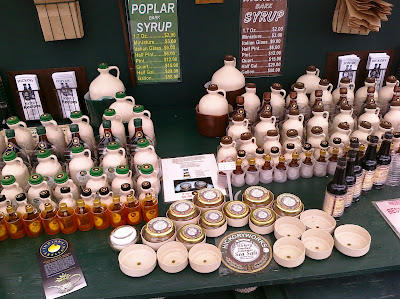 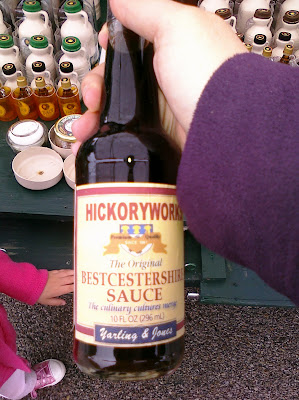 I stopped at Nicole-Taylor's to check out the handmade noodles and ended up buying 2 packets of lemon pepper and 1 of chipotle. The packets are single serving and can be frozen for up to 2 months. I'm really excited for the lemon pepper. I plan to do a veggie toss with it- a little olive oil, capers, brussel sprouts (I steam them and then finish them in a foil packet in the oven with lemon pepper and a couple slices of lemon), asparagus, artichokes, sauteed mushrooms... yum! 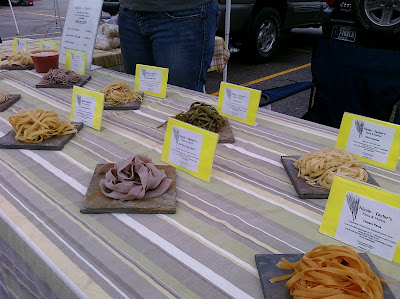 Next came Teagan's favorite stop- the honey booth! And would you believe that I forgot to buy honey? I'm a big fan of using locally produced honey- they say it can help with allergies to local pollens and such. I had my eye on the honey soap but I'm still using the goat's milk soap I bought from Annie's Goat Hill a while back. 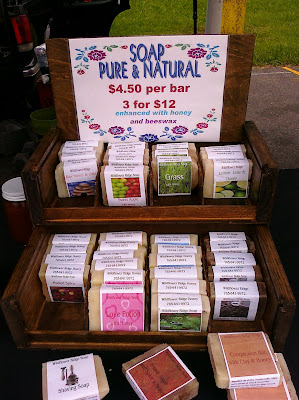 The honey booth is Teagan's favorite stop because I give her 4 quarters and she gets to buy 5 honey sticks. She picked out flavors for her brother, too. She chose to enjoy the root beer honey stick while we finished shopping. 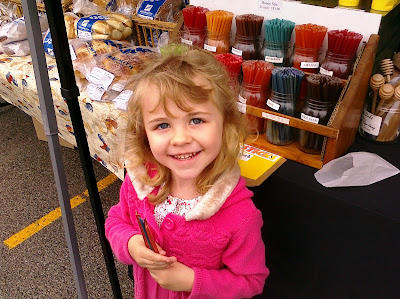 Next, we stopped to listen to this guy who was there promoting his upcoming album. Teagan was fascinated by the hands free harmonica, enjoyed the singing, and was really confused as to why he took his shoes off. We gave him a dollar. 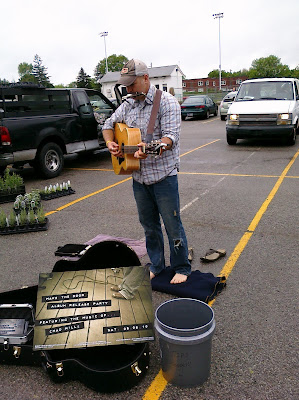 Final stop was produce. Next trip, I'll hit up the meat farmers but the lines were a little long and Teagan was a bit restless by this point. But I had to get my asparagus and I managed to snag the last bunch of radishes! 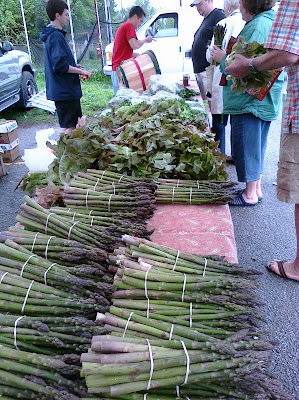 Lots of people bring their dogs out to the Markets around here. I only noticed this sign on this one booth. I have to wonder if they've had a bad experience with the dogs? 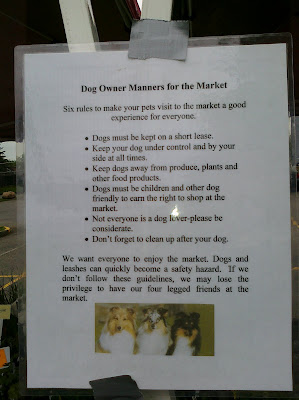 Oh! It wasn't my last stop! We passed by a caterer- no storefront or restaurant (yet)- who specializes in Mediterranean dishes. I tried the pickled cabbage (it was awesome but pricey at $7 for the jar) and Teagan tried the phylo-cheese-spinach thing. She loved it so I bought some. 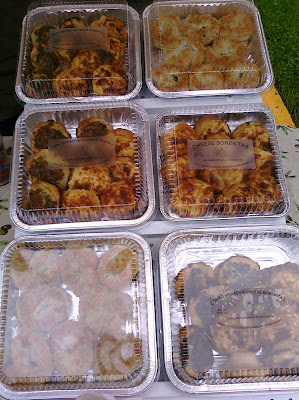 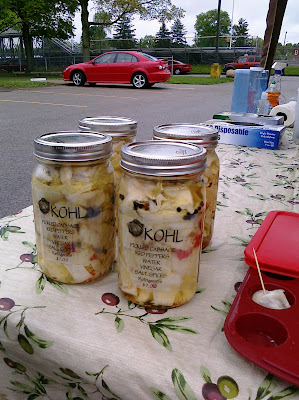 Got home and surveyed my finds! I bought 4 tomato plants. 2 are mule team tomatoes (large, good for slicing for burgers) and 2 are black cherry tomatoes. 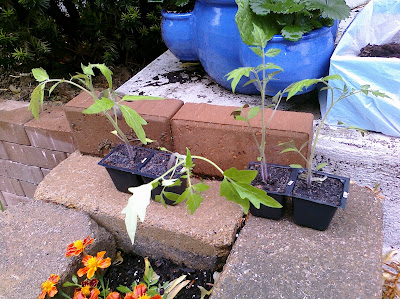 All the good stuff I bought! Spinach, radishes, asparagus, bestcestershire sauce, noodles, mediterranean food, dog cookies, persimmon bread (Zach LOVED these. Teagan didn't like them- thought they tasted like chocolate. The guy selling them had said they were similar to a brownie and I guess he was right- I didn't even get a nibble so I guess I have to buy more next time!), honey sticks, hickory smoked salt, granola. 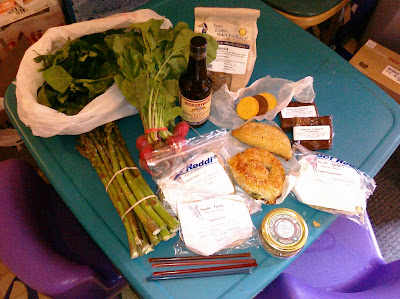 It was a good day at the market!!

Yay, thanks so much for sharing! You have some different products from ours. I'd love a fresh-noodle booth, yum! And the asparagus is just coming in here, so it's usually gone by the time we wander in at 8:00. One of the benefits of being smack in the middle of farm country for you!

Persimmon bread?? That sounds amazing! I keep checking the persimmon tree for flowers, but nothing yet. If it fruits again, I'm definitely googling a recipe for that bread!

So, why DID he take his shoes off??

man that post made me hungry! i can't wait for local asparagus...eric and i love it, altho the girls refuse to eat it...

I love Farmer's Markets. I didn't go today, since our day was already full of activities. But there will be plenty more opportunities throughout the summer. Thanks for getting me super excited about going.

My tennis was rained out so we headed over to the market about 10. I hate going that late and I see the asparagus was all gone...and you got one of the black cherry tomatoes from Mr. Wild that I wanted. That only forced me to find four other new varieties to try.
I love, love, love the BR market. Joe Phelps meat is great but he will only be there for a couple more weeks before he heads to the Carmel Market.
My haul today was a bit smaller than yours, tomato plants, bok choy and another asian green, and some eggs.

I love exploring Farmers Markets. There's always something tasty that I have to get.