Not So Itsy, Not So Bitsy!

Wednesday morning, in my bleary eyed, half asleep early morning state, I stumbled to the kitchen door to put the dog out for morning business.  As she ran onto the deck, I saw something drop near her.  I thought it was a rain drop.  Until I looked up and noticed...

A big one that took up about half of the doorway. This is Charlotte.  Charlotte isn't showing off her full size because the web had jus tbeen bombed by a rain drop and vibrated in what must have felt like the Great VA Quake.  This resulted in Charlotte pulling in her legs close to her body.  The kids were fascinated.  Jeff and I were trying to act like it was all cool- which it was- and not show our totally skeeved out side! 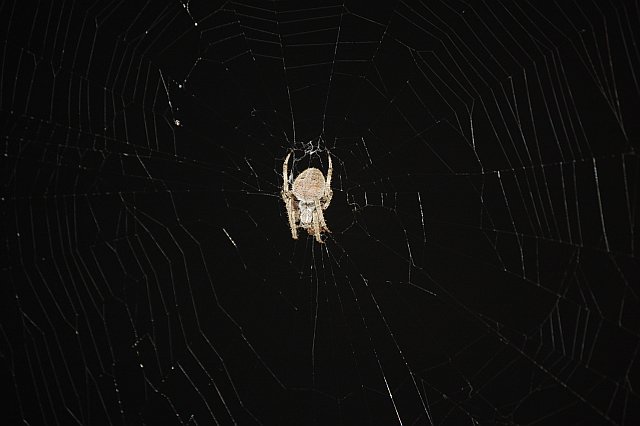 I think Charlotte is an Orb Weaver.

Charlotte did something really, really cool and I wish I could have captured it on video for you.

She caught my eye as I was making Teagan's lunch.  I saw her shoot down towards the ground and start the ascent back to the web.  I watched and quickly called the kids to watch.  As she made her way back to the center of the web, the bottom of the web was disappearing.  Quickly!  She made it to the middle and the bottom half of the web was completely gone.  She swung her way to one side and came back, again bringing web in with her.

After a little research, it turns out that some Orb Weavers will eat their web and recycle it!

Zach... well, he had one question.

"Mommy? Can you make she dead?"

That's my boy!  Too bad Mommy and Daddy are more squeamish about the squishing of a spider than about the spider itself.  I kind of enjoyed watching Charlotte creeping about through the glass of the kitchen door.  Part of me hopes she'll have a new web ("Some Pig!") built overnight.

Part of me is ready to go out and buy lots of insect repellent to put around my house.

I hate spiders.  A lot.  But I hate them less when they are outdoors.  I absolutely hate them being inside my home or my office or my bathroom stall.  But outdoors where I can maintain a distance that feels safe and controlled is all good.

My spider fear also runs to spider nonsense.  I can't squish a spider.  Not because I think it's icky (which it is), not because it might jump on me (which it might).  But because if I squish it, that spider sends out a Secret Spider Signal to all the other spiders and the friends and family of the squished spider will come for me.  But if I spray it to death with hairspray, it never realizes what is happening until it's too late and it dies without being able to send out the Secret Spider Signal.


Edited to add: After posting this, I went into the kitchen and Charlotte came back.  Jeff and I watched for a while, I snagged a few more pics, and then slammed the door before she accidentally blew inside. *shudder* 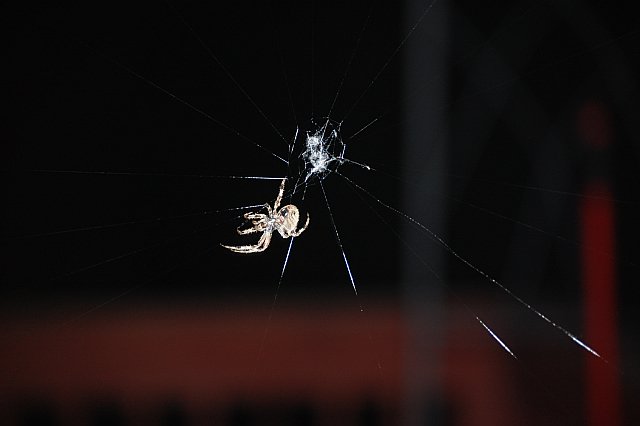 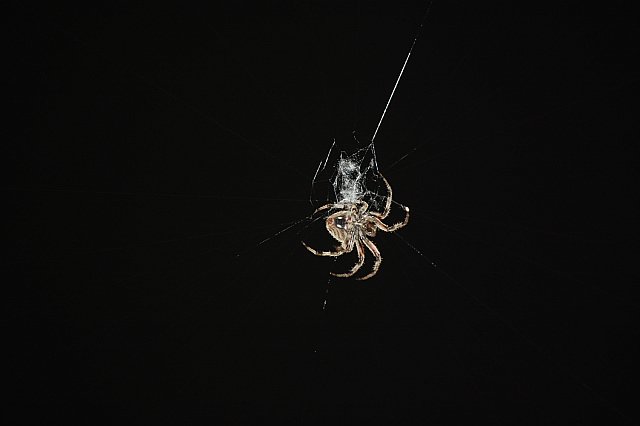 I am following the squishing, Secret Spider signals, and friends...totally with you on that!

I can't squish spiders either. Mostly, because it's just gross. But a little because I feel bad.

Spiders totally scare me if they SURPRISE me. But it is fascinating to watch them when they are just doing their thing and I'm not surprised by them.

My mom was telling Chickie the other day about a time my dad squished a spider, and apparently the spider's egg sac was just ready to pop. So when he squished it, a LOT of little baby spiders all came out of the egg sac and started running around the floor! Now THAT would scare me!

She's gorgeous. Yes, I'm weird. We practice spider tolerance in this house, the level of tolerance is species dependent though, daddy longlegs are allowed to live wherever they like, huntsmans and other spiders of size are evicted to the garden, and funnel webs are killed. Turns out I'm not willing to cohabit with something that can kill me.

This was so fantastic. Laughed out loud about 'make she dead.' : ) Funny!

I would have watched its spidery antics for a while, but I would not have retired for the evening without a death.

I'm going to have the creepy-crawlies for the rest of the day. I hate spiders. Hubby, on the other hand, feeds them. Grasshoppers, crickets, those annoying fake lady bugs.....anything he can get his hands on.

(that's what I get for marrying a biology major)

Outside, I tolerate them.. Inside, I destroy them. Then leave their dead bodies on the wall as a warning to others.

Ever see a banana spider? Even creepier.

... by then i was screaming and running in the other direction.

needles to say I HATE SPIDERS!!!

Thanks for the laugh!
Leontien

We had a spider just like this in the doorway of our back sliding door (outside). Our "Charlotte" appeared every night and disappeared during the day. During the day we barely noticed the web, but at night it shone brightly in the moonlight. I'm not a fan of Spiders, but this web was so fantastic and she kept trapping all of the annoying pests that typically would make their way into our house, that we left it there. I was actually disappointed one night when I realized it was gone. Heavy winds and storms blew it down and she never came back. I was actually a bit sad. Wish I'd gotten a picture like yours, but with my camera, I doubt they would have been half as pretty as yours.

You also shouldn't squish a spider because once I stepped on a ginormous spider in our garage and hundred -- probably thousands -- of babies came running out. Ewww...creeps me just to think about it.

I'm so squeamish, I couldn't even look at the pictures!

I have some serious arachnophobia. I'm with Zach. Make she dead.