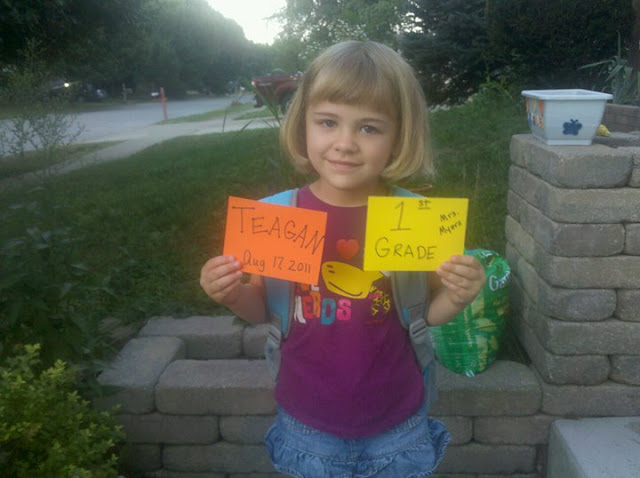 Something changed in my girl today.  It's not a bad change.  But being totally on her own in this completely big and brand new environment is forcing her to do some growing and I know she's ready.

Here is what we know about her day.

We know they offered her breakfast at the before care program (cereal) but she declined because she was so stuffed from breakfast (cinnamon rolls).

She enjoyed spending time with the little girl we met on Monday night.  She's also new and her name is Elizabeth so Teagan was excited to have a friend with a name matching Mommy's.

The first before care worker who approached Teagan was also named Elizabeth!

Teagan and her classmate Elizabeth enjoyed recess and lunch together.

Teagan was hugely impressed by the number of school buses and the amount of kids who poured out of them.  She informed us that there are a "zillion" kids in that school.

She remember the principal making a morning announcement but didn't remember what he said.  She said they all stood up and said the Pledge of Allegiance together with the principal as well.

She enjoyed her packed lunch but didn't have time to finish everything but also said she was full.  She doesn't yet have interest in buying lunch.  She also got a snack after school in her after care program.

Her teacher is nice and funny and her teacher and I, according to Teagan, have the same hair.

They didn't do any math.

At dinner, she told me very calmly that she isn't sure she likes school and maybe she wouldn't keep going.  I asked her why... and my heart broke when she said that maybe she just likes it at Little Explorers more.  By the end of next week, I'm betting she's changed her mind.  But right now, she's going from practically running her school (if she could ever find a way to fully trick Ms. Lori into turning over the keys, she'd totally love being the boss of the school) to feeling small and overwhelmed in a huge place where she doesn't know anyone.  She's gone from being in a place that we consider to be part of our family to being in a place where she doesn't know anyone and feels alone.

It's a huge deal to ask kids to trust us that much, isn't it?  I expect and want and appreciate that my daughter trusts me enough to go to school and turn to the adults to help her and to follow the rules and expectations.  She isn't going in to this new situation thinking that someone is out to get her or hurt her, she isn't scared or untrusting.  She believes, automatically, that she is in a good place.

On a different note, the hardest part of the morning wasn't just walking out of the school after taking Teagan in.  We all went as a family so Zach was with us.  I am glad I took the extra time yesterday evening to rush and get the photo albums done because it seemed to help Zach feel better.  We walked out of the school without Teagan, Jeff was carrying Zach, I was trying not to cry, and when I looked at my little boy in his Daddy's arms, his face broke my heart.

He looked so lonely and sad.  It's like he just... wilted.

So we got out the album and I showed him where it was in his backpack and he smiled at some of the pictures.  Daddy put his favorite CD on in the car (Imagination Movers) and he apparently looked at those pictures all the way to school.  They got to school and Zach cuddled with his teacher and showed her the pictures.  He had a few rough spots this morning but had a perfect afternoon.  He's been telling us for weeks that if Teagan isn't at school, he won't love anyone there.  Today, he decided that he loves Ms. Cora.

I call day one a success.  We've got adjustments to make in the week ahead and plenty of learning to do.  Elementary school is a whole new world with brand new expectations and rules and requirements.  Teagan can and will excel because that's what she does.  Zach will adjust and will reach out for comfort when he needs it because that's what he does.  I'm eager to continue on this path and to watch my babies grow and blossom and achieve these new milestones of independence.

Such a cute story. Isn't it cool that some day the kids can read your blog or at least excerpts about themselves?

A big day for everyone. I love that you have given this so much thought and preparation. It can only make things easier on everyone as they adjust. I remember loving the start of school but I didn't have a built-in playmate at home - my brother is 5 yrs younger than me.

I do remember my first "weekend" though - nobody explained that when you go to school "every day," there are these things called weekends. Maybe Beth could add a verse to her song about that. ;)

Firsts are hard. I'm sure that they will make the transition just fine.

Phew! Sounds like it went quite well. So at what point did you let yourself cry? ;)

Love that the pictures helped Zach out so much--great idea. And so much the better if he starts attaching to Ms. Cora. This is a great chance for him to really develop on his own.

Of course,that might mean more scraps with Big Sister as they both stretch...ah, siblings. :)

I'm glad everyone made it through the day. It really is a year of changes for your family.

2) I'm not a parent, and have no plans to become one...so it's always interesting to hear about the daily struggles parents have to go through.

3) I've never thought about the trust issue. The fact that they, as children, put all of their trust into adults. They they go to school, because we tell them they need to, they have to. We tell them that they'll be ok, and enjoy themselves. We know they will, but they don't know that yet. They are still trying to figure out why they had to leave the place they new for something unknown. It's up to us to show them that change may be scary, but the rewards are worth it. She is going to meet so many people and experience so many things.

The good news... Zach has had 2 awesome days at school. His day today was so incredible that he earned a special prize from the treasure box.

The not so hot news... Teagan is struggling, as is expected in a brand new place with brand new people. She is feeling lonely and sad and unsure of herself. It's breaking my heart but we're figuring it out as we go.

You are SO smart. It's all gonna be good.