Last night, a friend and I went to see a local community theatre's production of RENT. 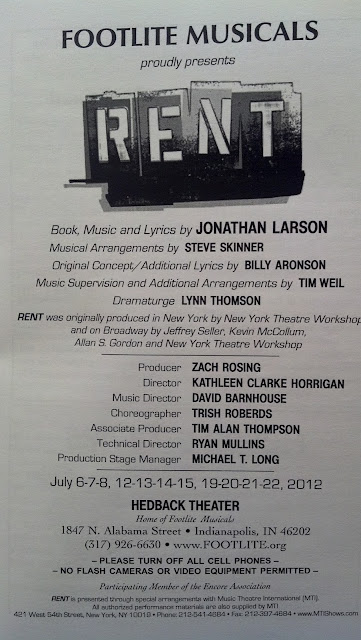 It's been 3 years since I first saw the live, stage version of this show.  I've been in love with the music since it hit the scene in the mid-90's and the tragic story of Jonathan Larson and this ground-breaking musical made waves.  It was just after high school graduation and the characters and issues of the show felt very real to me- even though I lived a life very disconnected from these characters.  No one around me was poor, homeless, dying from HIV/AIDS, struggling to stay connected to their art, etc.  But the deeper levels of Rent touch any heart at any age in any situation- about life, love, fear, community.

I knew Footlite's Young Adults would do an amazing job with this show.  And they did.  Kathleen Clark Horrigan is one of those directors in local community theatre circles with a fantastic and well-earned reputation.

Before I go into over-gushing mode, I want to share just a few minor critiques.  I'm not blindly loving any production of Rent simply because of how passionately I love the show itself.

First, I bought our tickets June 9.  A lady in front of me had bought her tickets June 10.  We were in the last 2 rows.  I have to wonder if all those people in front of us had bought their tickets on June 8?  I would think that since these are assigned seats, there should be preference of seating given to those who order tickets earlier.  This was a half price night so seat selection before the show wasn't an option.  I'm seeing the show again next Friday and I did select those seat and will be going from row Q to row J so I'll know if closer up is better or not.

As for the performance itself, there were only 2 characters that I really thought needed more attention.  Mimi didn't grab me from the start.  It seemed to take her a little time to warm up into the role.  By the end- she was fully Mimi.  But her first 2 main songs felt like she was just behind the beat a smidge.  Then there was Joanne.  Minor complaint- I didn't like her costume in the second act.  She looked like a mom instead of an Ivy-league educated lawyer fighting for the people.  My other observation was that it felt like some of her lines got swallowed.  I don't know if it was a sound thing or something the actress can do in terms of clarity... but Joanne has some important lines that got lost- especially when we first meet her.  Her first lines set up who she is and who Maureen is so they are kind of important.  And at the end of the first act, Joanne has an important and funny line about the rioters refusing to leave the lot because they just keep moooo-ing.  The line is a call back to an earlier part of the show and it got lost completely.  The actress is incredibly talented with an incredible and powerful voice so losing any piece of Joanne was unfortunate.

On a strange note- the young woman who played Maureen was also recently in Rumplestiltskin at the Lily Theatre at the Children's Museum which my family saw!

I loved the show.  I'm excited to see it again next weekend.  In terms of this particular production, I have oodles of great things to say.  I've seen several shows at Footlite and the one complaint I usually have relates to the sound.  I've seen shows where all you hear is the orchestra and you completely lose the actors.  Thankfully, the sound was great for Rent.  Lighting and set were phenomenal.  The costumes, aside from Joanne's in Act 2, were great.  Extra credit for Mimi's and Angel's and Maureen's costumes.

I loved Angel and Collins.  Amazing talent, good chemistry between the actors (the kisses could have been a little more passionate, less friendly but that's just me being picky...).  I loved Maureen and the Over the Moon performance was fantastic.  Anyone who can rock that shiny body suit thing they had her in- wow!! I'm guessing it takes most of intermission to actually get that costume on.  Roger was perfectly cast and incredibly talented in voice and acting.  When he sang One Song Glory, I had chills.  Mark was exactly perfect.  I just can't emphasize how incredibly talented this cast is and what amazing passion and energy they all brought to the stage.  Mimi's body control was ah-may-zing.  She could move in some seriously intense ways- while singing- and it was easy to see how the character got the attention she did when you have an actress who can bring that sexy side to life.

And as someone who is more of an "2nd homeless girl from the end" kind of ensemble girl (I can totally rock the jazz hands)... I have to give a bravo to the ensemble.  They have an important role aside from being the extra people- they also get to break the fourth wall and be in the audience.  They surrounded us to sing Seasons of Love.  They touched us with their fears of dying in Will I? and they brought incredible life and joy to La Vie Boheme.  There was a young man who danced in the aisle (audience right) by the very back row for La Vie Boheme- I don't know who he was but I LOVED HIM.  His energy was infectious!!  He was dancing because he was so filled with joy and life and that's the point of the song.

So why do I love Rent the way I do?  This time, it was the message of love that I walked away with.  Last time, it was the fragility of life and the fear of facing death.  But as I sat surrounded by the ensemble as they surrounded the audience with Seasons of Love, I knew my message from the show this time around was the important of love.  Of finding love, of loving others, of generous giving, of compassion, of caring.

Look back on the year gone by so far.  Can you measure how you've loved?  Can you see how you've shared and spread love?  Look at the year ahead of you.  What can you do to focus more on love?  On feeling loved and on showing love to others...  I'm blessed to know that my life is surrounded with love.  I know that I share love with others and that there are so many people in my life that love me.  I wish that everyone could feel confident in knowing they are loved.

One of the amazing things about Rent is that you know, you just know, that the people who came together to present this musical have become a family.  To really dig into these characters and breathe life into them and make them completely real, you have to get in touch with some serious emotions and you have to be connected to the community, to the family that has been created in this cast.  And when you go to see the show, when you are part of the audience, you are part of the life and love of that performance.  I had to fight the urge to reach out to hold the hand of the cast standing behind me to sing.  I had to fight the urge to hug the other audience members around me.  Maybe I shouldn't have fought that urge.

See it.  See Rent.  And live your life, measuring it in love.

And I think the bulldog totally stole the show.