One of the things I've really come to appreciate the most about blogging is the connections I've made to people around the world. I've made friends with people in the Carolinas, in the UK, in Australia, and in New Zealand. It's cool to know that I've got readers around the globe- other moms, other women, other men, other people who can connect to something that I put out here on the Internet. Sometimes, those connections become friends- people I chat with, talk with, e-mail with on a regular basis. One of those friends is a fellow mama- Emma. Emma has a blog but isn't so much a blogger anymore. Life can certainly do that to you! But she and I have stayed in touch- and I am so glad for that! One evening, we were chatting on Facebook and the subject of Twinkies came up. They don't have Twinkies in New Zealand. They used to... and now they don't anymore. So Emma was lamenting her sad lack of Twinkies. From there, the subject turned to Girl Scout cookies- something else not found in NZ. A plan was hatched. We need to share cultures. Emma immediately began crafting up a care package for me. It arrived yesterday and I picked it up from the post office today and am so thrilled with this little plan we've come up with! What a TREASURE! See? Even the stamps are cool! 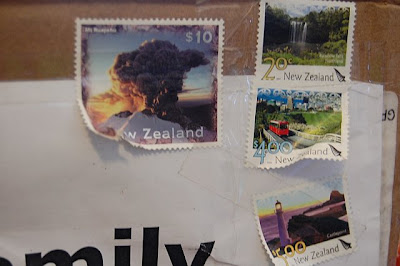 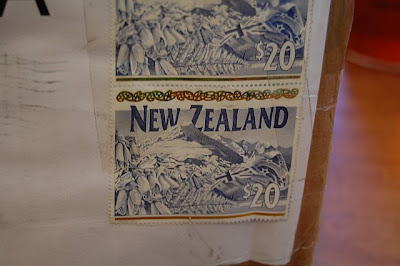 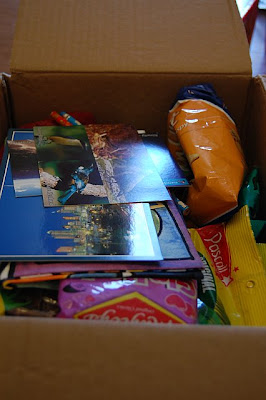 The very first thing I cracked open: Bluebird chicken chips. Emma included a wonderful letter explaining the items in this package. In it, she said that "nobody here can get over the fact that you guys don't get them!" It's true- I'd never even heard of a chicken flavored chip before! Opened the bag, handed a chip to Teagan and a chip to Jeff (Zach was down for a nap so he'll try some later). Personally- I loved them! Tasted like a rotisserie chicken to me. So tasty! I think it's a shame we don't have these in the US! 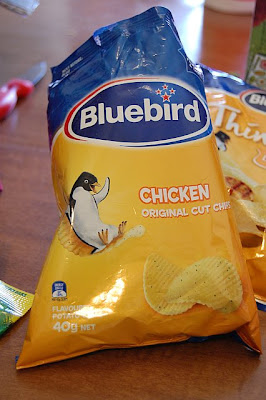 This was Teagan's favorite- all the candy! We had some of the party pack (we tried little marshmallow type things that were very similar to circus peanuts but softer and better flavors) and a glo heart (similar to a jujube but with a licorice flavor). 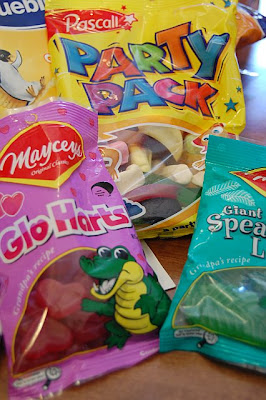 I'll open the biscuits after Zach wakes up from nap so we can all try them together. Emma gave me a great history lesson on these ANZAC biscuits. There are lots of ideas about where these cookies came from. The originated during WW1. Some say that soldiers figured out a way to make these with whatever they had on hand in the trenches. Some say that they were created by NZ and Aussie women to send to their loved ones on the front lines. 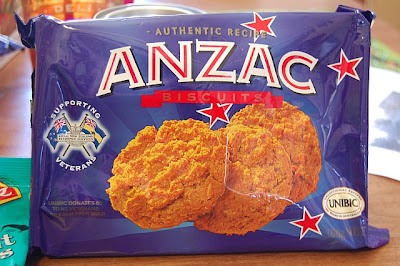 I'm really looking forward to trying this- Milo. I'm saving it for when Christy can try it with me because no one else in my household is going to be excited for it. But Christy and I will definitely enjoy it!! Emma gave me tips on the best way to enjoy it... and I'll take her advice! 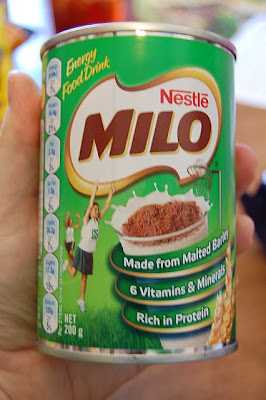 Emma included a lovely necklace for Teagan- the pendant is a Kiwi bird. T loves it! 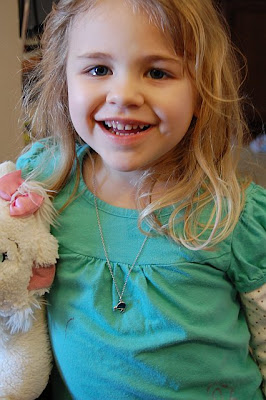 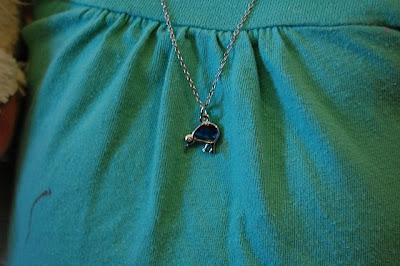 Postcards! This is 90 Mile Beach. According to Emma's note, NZ and the US have about the same amount of coastline- just a lot less land in between coasts for NZ. But that means that you aren't ever far from a beach! Isn't it gorgeous?? 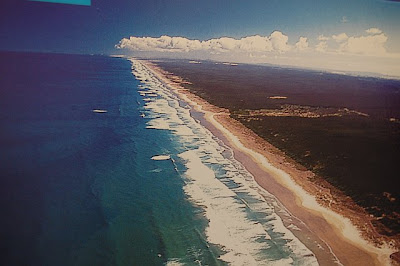 Birds of NZ- this is a postcard but Emma also sent Teagan a fantastic book about plants and birds found in NZ. We are eager to sit down and read it and I'm betting Teagan takes it to preschool to share with her classmates on Monday. 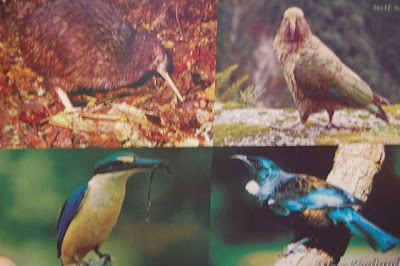 This is a postcard of Auckland City- which is where Emma works! That tall building is The Sky Tower and there is a revolving restaurant on top. It would be so beautiful to be up there! 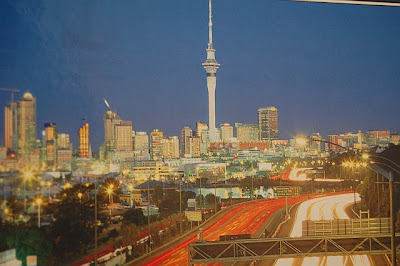 One of my favorite gifts is this pounamu. It's considered bad luck to buy one for yourself- but is often given as a gift to visitors. It's a gift of peace and good fortune. I love it. 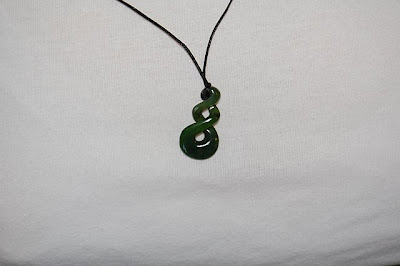 Emma also included a book for Zach- Hairy Maclary from Donaldson's Dairy by Lynley Dodd. She says it's a favorite of her son's. I'm eager to share it with Zach.

She included a t-shirt for Jeff. I snuck in during naptime and clicked a quick shot... 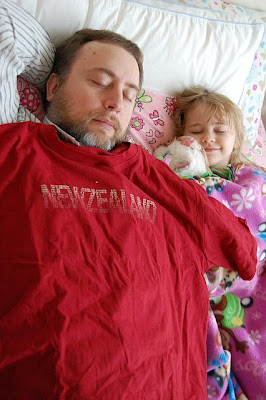 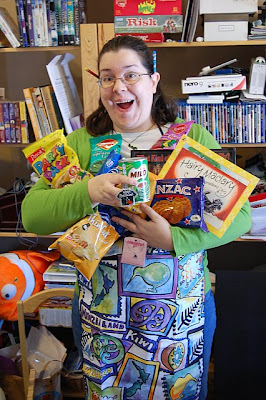 I am so eager for the Girl Scout cookies to be delivered so I can get your package put together! I'd love to hear ideas from my readers about what things are so uniquely American that would be great to send in a box of GS cookies and Twinkies...

James Michener wrote that New Zealand was the most beautiful place on earth. I've always wanted to visit.

Oh the Kiwi necklace brought back such a memory. My grandparents traveled quite a bit and always brought three dolls from where they had visited for my two cousins and I to choose from. Each trip one of us chose first (and then last the next time) and we all got a new doll. (not ones you could really play with). Well, I was the ultimate tomboy (had 4 brothers) so being the ungrateful granddaughter that I was, informed my grandmother one year that I really didn't do dolls! So, being the wonderful grandma she was, the next trip, she brought me a special gift (along with a doll choice because you never knew when I might change my mind and my daughter might like dolls (she doesn't)) I got a Kiwi pendant - and if memory serves me right, looks very much like Teagan's. Thanks for making me remember my Mamaw!

Yay! I was hearing all about the putting together of this amazing package on FB chat and couldn't wait for you to get it. Emma is all kinds of awesome :-)

Incidentally, guess what I'm doing tomorrow? I'm spending the day with Em here in Sydney! She's coming over for a conference and has time to fill in so I'm keeping her company.

I know Mim!! I'm chatting with her on FB right now and she's telling me all about it. She's so FANTASTIC!


(*Blushes* Looking forward to it mim)

Wow, that is really wonderful. I tried Googling looking for a list of unique US products but so far have come up empty handed. I found http://productsfromnz.com/ but you need the opposite.

I totally thought about Skyline!! Since it comes canned, it would be easy enough... :) And maybe Ghirardelli chocolates. Maybe animal crackers? I don't know what foods are uniquely American... pretzels? Doritos? Cheese balls? Cheetos?

Moon pies! Peanut butter? Send her some buckeyes from Ohio! Grits, maple syrup...corn nuts? (Not that I like those, but...)

That was a seriously fun-looking package!

How much fun is that! That was a terrific idea about sending care packages. My SIL now lives in the Netherlands and she brought over a bunch of foods that are popular over there at Thanksgiving such as licorice with salt on it. I would have to agree with Doritos. What about Hostess cupcakes and sour patch kids, Mike and Ikes, and Peeps (since Easter is coming up). Do they have Hershey's there? I can't imagine life without Hershey's chocolate.

We had an exchange student from France, and do you know when she left she filled her extra suitcase with Big Red pop (soda, around here...)Which used to be strictly and Indiana product...don't know about that anymore. And for years, we would send her Big Red care packages! The other thing she couldn't get that she loved was Jell-O. Strange, isn't it...the little things we take for granted that people in other parts of the world have never seen!

mamwich is a good one to send in a package, When i went home to South Africa in November I took that with me and they loved it, they had never heard of it. anything hersheys is good, peeps are good too, poptarts-dont think they have those, I am trying to think of things that I send home all the time. reeces are a good one, if i think of anything more i will let you know.

Wow, what a great care package. I've sent some similar gifts to my family in Austria, and the most American hits were:
1. funfetti cake mix and frosting
2. any food item that changes color (so many chemicles so american!)
3. those cookie cereals
4. an american cookbook-- with measuring spoons (i'm not sure if NZ uses metric or not!)

This is a great idea!!!
I love pineapple, so now I'm curious as to how those pineapple lumps taste. That was a funny commercial.
I'm hope you're sending samoa girl scout cookies!

What a wonderful package! It makes me miss NZ so much (I lived there for a year a few years ago).

I think something interesting to include would be butterscotch chips. I don't think they have them there. When I went to the store when I needed them to cook something, I couldn't find them and asked where they would be. They thought I was crazy!