I'm a little behind on the "news" these days.

I was listening to a previously aired episode of a talk radio show that has brought up angry responses in me in the past.  In fact, I rarely listen to it anymore because I can't find myself connecting to one of those hosts on a consistent enough level that I feel like there is any logic or reason being considered on a lot of topics.  So I stopped listening and went to podcasts, music, or just silence instead.

Today when I got in the car, this station was on and the topic immediately caught my attention.

Apparently, back in early May in Georgia, a man had been arrested for spanking a 4 year old.  The big issue?  He isn't related to this kid, doesn't know this kid.

As best as I can put together, the story goes a little something like this.

Man is in waiting room of vet's office with his cat in a cage.  Cat has recently had surgery or something.  Also in waiting room is a mother and her 4 year old son- who she admits she was "having trouble controlling."  The man asked the mom to keep the kid away from the cat, shouted at the kid to stay away, but the kid continued to approach the cage and poke at the cat.  The man then swatted at the child's backside- the man says it was a light enough touch that he doesn't think the child even felt it.  The man was arrested and charged and there was a $1,000 fine or something.

What a day that must have been.  And I can totally imagine the status updates and ensuing conversations.

But you know what no one is talking about?  Do you know who is being missed and probably needs the most attention?

The mom and 4 year old were in a vet's office.  They have a pet.  This poor cat or dog must be exhausted from this unruly 4 year old and this mom who pays no attention and this family that hasn't seemed to teach this child how to treat animals in a safe and respectful way.

So maybe I can hear this story and know that my kids never would have gotten to a point that they approached this cage.  We teach our kids that you ask the owner before you approach an animal.  We also teach our kids that an animal's cage is a safe place for that animal- if Sassy goes to her cage, it's because she needs to be left alone.

And maybe I can hear this story and know that if my kids were being unruly, there would have been a removal from the scene and a "come to Jesus" talk would have happened in the bathroom or parking lot before we returned to the scene.

And maybe, as a pet owner, I can hear about this man attempting to defend his cat from this child but knowing that if it were my Sassy, I would have picked the cage up so it was beyond the reach of the child or I would have asked if we could be put into a quieter waiting place.

And maybe, as a mom, I can tell you full well that there would be a huge and immediate reaction if any stranger puts there hands on my child in any way that hasn't been approved through a knowing look with me- grab my kids' arm, try to hug them, spank them, hold their hand in my presence... you don't touch a kid that you don't know.  Period.  (OK, I can relax that rule when it comes to helping a lost child or something like that- but you get my point.)

But the bottom line is that there is another pet in this story who isn't getting the attention, who has slipped between the cracks, who may be calling out for help.  Let's get our focus on the real issue!  This pooch could be in a home being tormented by this unruly 4 year old with an overwhelmed mother!  Why isn't the media reporting on the things that really matter in this story?? 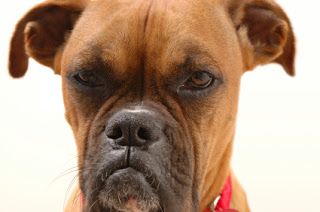 I heard about this and thought it was crazy. I really can't believe the guy was fined. While I do understand that it wasn't his kid, I do believe he had cause to react in a small way, light tap.

As for the kid's pet...animals react to hyperactivity. That pet is probably constantly stressed out and exhausted. I can only imagine how the kid's pet is when the kid is going around and reaching out to some stranger's pet.

I'm a little confused by this post and I've read it a few times. Of course, I didn't hear the radio story so I may indeed be totally off base : ). I personally DO think the story here is about the pet that did NOT belong to the child and his mother. Because, at that moment in time (again, just having the only knowledge of the story through this post), the animal whose welfare was in question was just the cat that was being tormented by the kid. I think that it could be a bit of a stretch to infer that the family pet belonging to the Mom & boy automatically receives the same treatment. There could be a mile long list of reasons why the kid was wound up and pushing that energy off on the poor cat at that point in time. Is that acceptable? Of course not. But I don't think I'd diagnose the stress level or well-being of the kid's pet(s) based on that one encounter.

I'd applaud the man.