I love an impromptu, unplanned night out with friends. I enjoyed my afternoon off yesterday. I checked out Costco- skipped it. Called my husband and he, brilliant man that he is, suggested I check out Super Target. Ding Ding Ding!! I head to Target, he meets me there and we had a winner! We pick up the food on our way to the party- wings, meat and cheese snacker tray, fruit tray, berries and brie tray, chicken caesar salad. And Jeff made cupcakes! I went and read to Teagan's class - I took an old book that was mine when I was little (Mr. Shaw's Shipshape Shoeshop) and a new book I just found (My Brother Charlie by Holly Robinson Peete and Ryan Elizabeth Peete- twins and the brother has autism- amazing book). It was great fun and the kids did fantastic and asked great questions and even enjoyed my favorite part of Mr. Shaw's Shipshape Shoeshop (the pictures of the big ship, on case you were wondering). Teagan and I came home- she went out to play on the deck and Zach and I went for a walk. Christy came over to drop off some things I had left at work in the fridge. We both realized we had no evening plans. We had been talking about a night out with our friend Anne soon- maybe Sunday. We called Anne- she was free right now! We head up to a little place near home... a little strip mall with a newer sushi place we've been wanting to try. Christy and I got there earlier than planned. And decided to use the opportunity to visit the Chateau Thomas Winery located 3 doors down. For $5 or $7, you can have a 5 wine tasting. The higher price lets you select wines from the "reserve" list. I got to taste a cabernet ice wine - it costs $50 a bottle- that was insanely good, as was the vintage port and the malbec. Our friend joined us and we headed next door to have sushi at Wild Ginger. All 3 of us love sushi and are always excited to try new flavors. Wild Ginger did not disappoint our tastebuds or our desire for a fun experience! 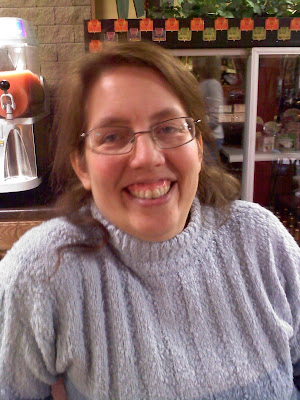 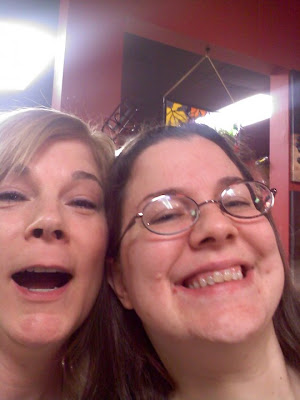 The food was amazing. The table next to us (mom, dad, 2 teenage boys) was ordering insane amounts of sushi and lots of the specialty rolls- including one called The Flaming Dragon. Yep- sushi on fire! 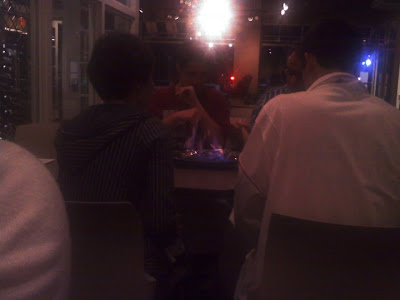 Wild Ginger also had a gorgeous paper crane chandelier / sculpture in the middle of the restaurant. I love this shot I got of it- from underneath, looking up into it. 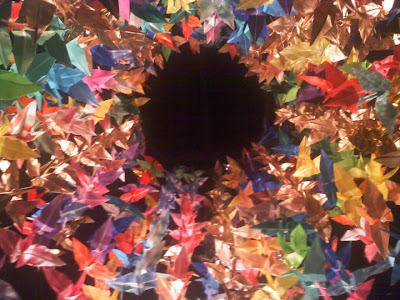 After we ate- appetizers, sushi, and even shared a dessert- we went to visit what used to be our gathering spot. An Irish pub called Fionn MacCool's. Awesome patio, live music on weekends. Great food and beverage. They closed very unexpectedly and suddenly. We hadn't been by to pay our respects so thought it was appropriate to stop by. All the furniture is still there- inside and out. The tables are still set with ketchup and salt and pepper and menu stands. It's just so sad... see how sad it is? 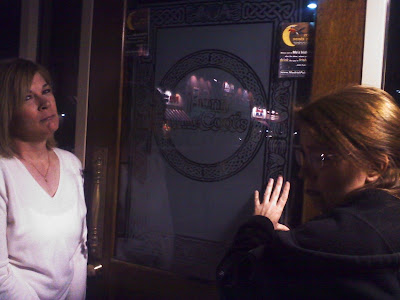 Walking back, Christy and Anne smelled gas. I smelled something chemically. Anne and Christy became very concerned. They had an employee from Chateau Thomas Winery come out and he smelled it, too. Very distinct, very much located in front of one store.

They sent 3 firetrucks and the Fire Chief.

It just isn't a night out if it doesn't end with sirens and lights! 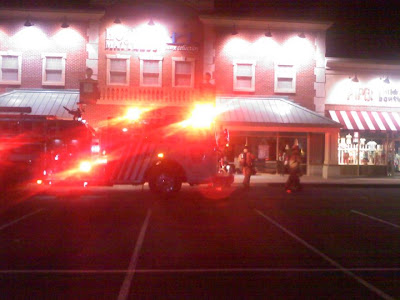 Wow, sounds like an exciting night out, fire trucks and all. So was there a problem?

Oh wow, what a GREAT girls' night out! Yay!

Was that an Irish wake you were holding?? :D

Yeah, so, was there something wrong, or did you pull the firemen away from the NCAA action for nothing?

The follow up... the firemen (and eventually 2 cop cars as well, apparently) all smelled the gas but couldn't determine the source so they called the gas company. Not a terribly exciting end to the story!