Shell over at Things I Can't Say has started up a new fun weekly competition using the Nintendo Wii game Just Dance. I can't say that I'm particularly skilled at this. But it is a good video to use in the future as a comparison. I can do this again in a month and will hopefully see a lot of changes in my body. So here's a pic of my highest score and a video of me dancing. I think I am officially supposed to video the entire routine and then show the screen but we were having techinical difficulties. So this is the best you get. I'm going to go ahead and post this Thursday evening... and then will think about including it in Shell's Just Dance compeition tomorrow! 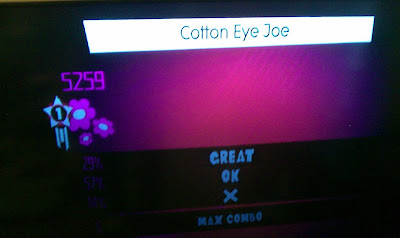 It's fun, though, isn't it? Thanks for playing along! Be sure to link up in the morning. And tell people to go vote for you in the comments as fan fave!

You look like you're having a great time! So I guess you need to have Just Dance? Do you like it?

And I would have kept trying for a higher score if it weren't for the technology issues we were having. :)

I LOVE that you included a video. You rock, Liz.

Good job! This was a really tough song.

Great job! Glad you joined the fun- and that is the point- the fun!! (Of course, I MAY be saying that because I'll probably NEVER EVER get a high score. ;) )

It is a lot of fun, and to know others are having fun too makes it even more fun :D

Sorry for your technical difficulties!