3/24- My first physical in a decade. And in medicine, the numbers matter. Weight: 240 on Mar 1 227 on Mar 24 Blood pressure: 112/78 Later today, I'll add my blood work numbers to my Healthier Me page. $675 The hospital bills have come in from Zach's urological issues in Jan and Feb. We go in for his follow up today- I fully expect that he will pass with flying colors. 15% I got a raise at work. Kind of. When my company was acquired, we all had to be "mapped" into 3M's job descriptions and pay grades. I ended up in the group who were underpaid. 3M developed a plan to give small increases over the course of 3 years to bring us up to the very bottom of our pay scales. Yes, there are many, many, many problems with that. Anyway, back in January, I got a 3% increase for that project. In March, I got a similar increase for my merit increase. And yesterday, I found out that, in April, I'm being bumped up to the bottom of my pay scale- 3M found a way to put those funds into the salaries of those impacted. It's quite a big jump for me- an overall 15% increase! $25 That's the amount of money I've been able to raise for The Race for the Cure so far. I have a $50 donation to make from my father-in-law, too. I'm really hoping to be able to raise more money and at least meet my minimum goal of $150. I'm halfway there! Personally, the most important number to me is 11312. That's my bib number for the Race for the Cure. Never dreamed I would ever have a bib for a 5K of any kind! 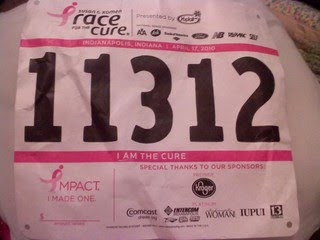 Sounds like your numbers are moving you in the right direction! Congrats!

Congrats on these successes, Liz!

And good luck with the Race for the Cure donations!

You totally rock. WAY TO GO!

Wow-jealous of the difference in numbers between 3/1 and 3/24! Good luck in the race!

The weight loss amount is outstanding! Is Jeff looking forward to the new you?

Holy Wow! You lost a lot of pounds. Way to freaking go : )