Last night, we went to see Mary Poppins at the Murat in Indianapolis. This is the touring production of the Disney/Cameron MacKintosh production. It opened last night and runs through October 3. We made a big night of our night out. This was a Girls' Night- me, Teagan, and Christy. We went out to dinner first at our favorite restaurant- Wild Ginger. It's an Asian and Sushi place and Christy and I go there often enough that they know us before we even walk in the door. Christy and I went overboard on sushi and Teagan ate every bite of her teriyaki chicken, shumai, spring roll, rice, and even mango ice cream for dessert! We headed downtown after our delicious dinner... 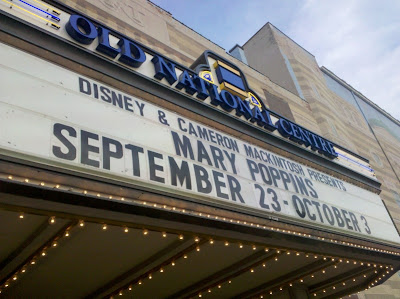 Before the show started (and I had to put my phone away) we had some goofy girl fun with the camera. 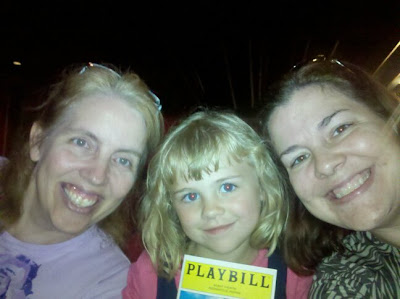 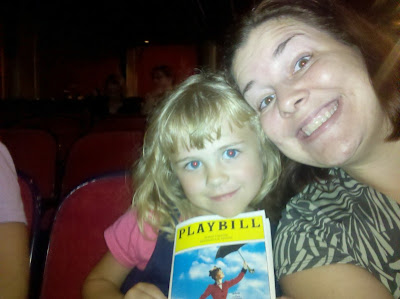 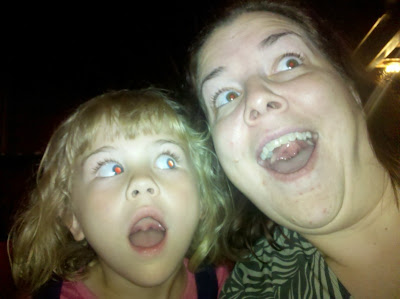 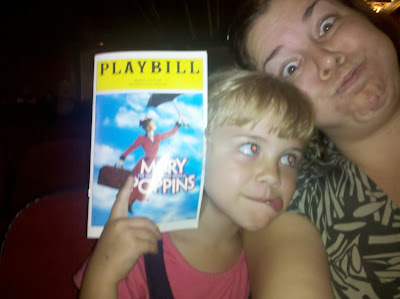 Soon enough, it was time for the show to start... 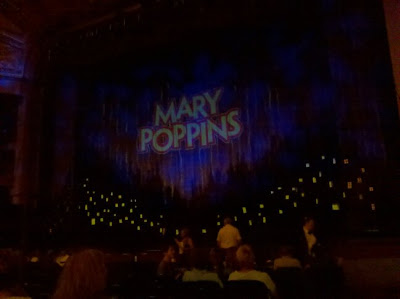 Any stage production is going to have some weaknesses, of course. And this show wasn't perfect. I could tell you my problems with some of the plot points or the script or the directing choices. But I don't want to be picky about the show. It wasn't the most incredible thing I've ever seen- but it had a few of the most amazing moments I've seen! The talent was solid and I enjoyed getting caught up in the magic of it all. The storyline of the stage show is a bit more complex than the movie and includes songs that weren't in the movie.

Some of the highlights included:

- End of Act 1 when Mary Poppins flies away via umbrella.

- The set piece for 17 Cherry Tree Lane was fantastic!

- Bert walking up the side of the stage and then dancing, upside down, across the top of the stage!

- When Mr. Geroge Banks busts out of his staid and precision and order driven self with a big old spastic outpouring of Supercalifragilisticexpialidocious-ness.

- The big dance/show numbers for Step In Time and Supercalifragilisticexpialidocious were fantastic and so much fun!

After the show, I asked Teagan what her favorite part was in the whole show. I expected her first answer- when Mary Poppins flew away on her umbrella. I didn't expect her second answer.

One of the storylines in the show that isn't in the movie focuses on Mr. Banks' nanny from his childhood. He expects his wife to find a nanny that can keep the children in order and be stern and raise them up right the way his nanny, Nanny Andrew, did. He makes some reference to Nanny Andrew beating frivolity out of him but the comments are almost more in passing. He speaks very highly of this woman and the role she played in his life. Mary Poppins leaves at the end of Act 1 and Act 2 opens with Mrs. Banks bringing a surprise for the family- she has found Nanny Andrew and brought her in to be their nanny. Turns out, Nanny Andrew is a mean and cruel woman and that the horrid way she treated Mr. Banks as a boy- killing the spirit of his childhood- is why he is so disconnected from his wife and kids as an adult. So there is a song where we meet Nanny Anderw and she sings about how horrible she is (Brimstone and Treacle). Later, after Michael and Jane run away from home because of her and find Mary Poppins and come back home, Marry Poppins takes care of Nanny Andrew- sending her off in a giant cage into what seems to almost be the bowels of hell. Later, in one of the closing numbers (Anything Can Happen), Nanny Andrew appears again but as part of the full cast and she is smiling and dancing and happy.

So Teagan's other favorite part of the show? "When the mean lady started making good choices and was happy." She spoke about Nanny Andrew several more times and was very curious as to how Nanny Andrew changed from mean to happy. I was fascinated with my little girl getting really caught up in this seemingly smaller part of the show.

We were very fortunate to have a tour of the backstage area after the show. All of it was exciting- learning about how some of the props and sets worked and that it takes 15 semi trucks to carry all of the set pieces and walking across the stage and seeing the perspective of the actors and peering up into the neverending fly space. But most exciting of all was that we happened to bump into Caroline Sheen as she was leaving- that's the actress who played Mary Poppins. She was sweet and pretty and stopped to chat with our group for a moment- which I thought was especially nice of her.

It was a magical night in many ways- Practically Perfect some might say!

If you are in Indianapolis, I recommend going to see the show while it is here. If the tour is heading your way, I'd say this is a great one to take your kids to see- or to take yourself to see if you love the movie or books.

Sidebar. Yes, Mary Poppins is a kid-friendly show. That doesn't mean that every kid is ready to sit through a live theatre production. When you go to see a Broadway touring show, you are going to a real theatre- the kind of theatre that some people still wear evening gowns and suits and furs for. It isn't a movie theatre and the seats are certainly more expensive than in a movie theatre. I was surprised at how rude some of the patrons were. Christy got her hair pulled at least 3 times by the child behind her- who also spilled a drink that ran down the floor and got Christy's skirt wet. See, there is a reason we didn't bring Zach. He's not yet 3 years old. He can sit through a movie in a theatre without issue. But I wasn't going to risk a 2 year old in a theatre late at night- him falling apart or getting restless would mean someone having to leave and miss the show. In addition, screaming, loud talking, whining and crying can be very rude distractions to the actors and crew who are working hard to give a great show to the entire audience. A child reacting to the magic of the show is endearing. A child continuously dropping their booster seat on the hard floor just to hear it make a loud noise is not. So before you decide to take your young children to see a show, please make sure they can handle it. Teagan is a "seasoned" theatre go-er and this was her first Broadway touring show. She's gone to community theatre productions and high school productions and a local semi-professional theatre production. Doing all of those things helped her learn how you are expected to behave in a live theatre setting.

Many thanks to Indianapolis MomsLikeMe for providing me with the tickets and backstage tour! Are you a member of MomsLikeMe?

Do you have memories of the books or movie Mary Poppins? Any favorite scenes? Have you seen the Broadway stage show? Any vent of your own to share about theatre patrons behavior?

What a great girls night. I remember my mom taking me to the theater and ballet when I was little. I'm not sure my boys are up for that right now, but I'm hoping to do similar things with them.

We saw this in DC and LOVED it. But the kids behind us spent most of the second half kicking the back of my seat. Grr... We went dressed as business casual, and felt like we were dressed correctly for it. I don't remember seeing any shorts, but lots of jeans and t-shirts, and a few suits. Mostly business casualish.

My kids were most fascinated by how Bert walked on the ceiling, and how Mary flew up over the audience at the end. We were up in the front row of the section where she actually landed, so that was great!

I have to say- I'm bummed that we didn't get the full Mary flying experience. Our theatre is a smaller one and I think we're limited in what can actually be done. When she flew, it was the end of Act 1 and was basically just stage left to stage right. *sniff, sniff*

I have two granddaughters that I take to theater stage shows. They are 9 and 6. We have seen "Lion King," and the 9 year old saw "Wicked." They have also seen "Junie B." with me. They both participate in dance and love the theater. When they are 12, they will go to New York with me to see Broadway productions. It will be a yearly event for the girls in the family. I have also started buying pins at each show and the girls are collecting them on an autograph dog they got as a gift from me one year. I am sure they will have many good memories of our theater dates. My husband and I have seen most (not all) broadway shows in either New York, London, or now Munich. I agree with you, it is an awesome experience.

I asked the family if we could borrow the booster seat, I had 2 girls who couldn't see very well, and it wasn't getting used. They wouldn't give it to me. Good review Liz, and awesome to see you. You look tremendous, but more importantly, very happy.