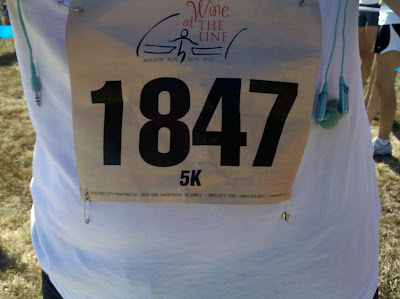 It was a good race. I did well considering I haven't been training. I'm eager to see how I can do better in a couple of months... I've got my eye on a 5K on Nov 6. I improved on my time from my first 5K. In June, my time was 46 minutes and 26 seconds. This 5K, my time was 43 minutes and 47 seconds. An improvement - amazing to me considering I didn't really do any training for this event. In fact, I was almost anti-training. I was working out but I was only running once a week and not aiming for certain mileage or endurance goals. My plan is to keep working towards the 500 Miles plan and, in so doing, I'll be better prepared for the Nov 6 5K and should be able to shave a bit more off my time. This was an inaugural event for Mallow Run Winery. They worked with an event company for organization. It was very well done. There was very little we could complain about. There are certainly areas that can be improved for next year- and I truly hope there is a next year! I registered on site since I didn't really commit to doing the event until about 2 days prior. That went fairly easily. We walked around the winery a bit before the start- just to warm up. The 5 mile racers started at 4 p.m. and the 5K start was at 4:15. There were 1,213 participants in the 5K and 470 5 mile runners. The route was well marked with volunteers posted at intersections or corners to help us stay on track. When the 5 milers were in the final stretch, they came down the road that the 5Kers were heading up and there were volunteers on bikes and in a golf cart that cleared the road for them. That was one point of contention for me. A lot of us that wanted to run had to walk because we got a bit packed in at that point. We were running through farmland and it was a serene setting- fields of dry corn, horses in a pasture, bright blue sky and a pounding hot sun. My other complaint was the handling of the drink station halfway through the course. They were a bit slow on cup filling and they had the station set on one side of the course so there was a bit of a slow down and even stop to get hydration. You have to spread out your water station and have a system in place where certain people fill, a filler hands to a hander outer, and you have your tables spread out and on both sides of the course. I did have water from that station and also gatorade and was surprised at how the gatorade actually pepped me up a bit. I might have to consider those gels they sell of gatorade type picker uppers for mid race. I took advantage of shade and downhill whenever I could. In the last mile, heading down the incline, the paramedic team was on the other side of the road assisting someone. As I got closer, I saw a worried mom seated on the ground, stroking the hair of a child who was laying in the ditch, being attended to by the paramedics. The child appeared to be around 10 years old and they had oxyen flowing and she was definitely passed out, heat exhausted, dehydrated, something. I held up my hands and prayed for a moment as I ran. I had to contain my emotion- I immediately put myself in that mom's shoes. But I had to keep running. And I did. And I crossed that finish line. And it felt awesome. The winery had pizza and wine and free wine tastings and special prices for event attenders. We sat outside and listened to the band for a few minutes and then headed into the store to each buy a bottle of wine to take home as a souvenir. 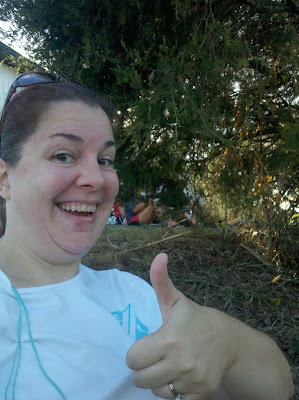 I definitely earned my shirt and wine glass! 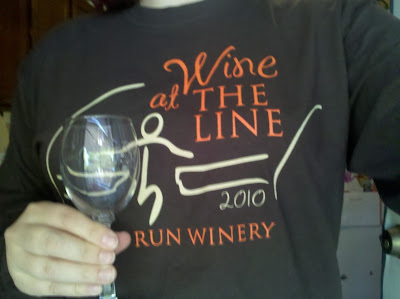 Congratulations Liz! Glad to hear it all went well, sounds like it was a great day :-)

Great job on both finishing and improving your time!

That sounds like a lot of fun, and congratulations on the time!

You're so cute. Congratulations on reaching another MILEstone! You look terrific!

How did Christy do with her run?

Christy met all of her goals. She improved significantly on her time and she ran the entire 5K.

Perhaps Christy should start a blog.

Yay you! I'd love to do this run next year! Not holding my breath, though, b/c I'll bet it will generally coincide w/ a band commitment for us for the next decade ir so, though, lol! But I'd love to do the Monumental 5k with you -- are you already signed up for it?

Well, I'm not up to starting my own blog, but I will comment here from time to time.

Wine at the Line was an excellent event, and they did very well with their inaugural run. The location was lovely, the wine and pizza were great incentives, the volunteers and employees were friendly, and the glass and long-sleeved t-shirt were beautiful. My brother even gave me his glass, so now I have a set!

I was very pleased with my time, and very impressed with my brother's performance. He beat us all, even though he quit running 3 years ago! Granted, he does work out daily, but not on a treadmill or running. He really enjoys running, so I hope he decides to keep with it (he has some injury issues to deal with).

In addition to Liz's comment about the hydration station (and I'd've loved to see a second one, too), I'd have also preferred signage at the start to assist the runners in self-organizing by speed. Typically, you want faster people in the front, slower in the back, but I don't think anyone realized what the turnout would be, even as we continued to pack the start line. Also, it's hard to tell if those in front of you are planning to be walkers or joggers or runners. Some lineup signs like "Walkers", or "13 Min Pace", etc., would have helped alleviate the bunching and dodging that occurred.

I took off right from the beginning, and didn't get to see Liz and Terran (sp?) during the run. But I know Liz looked great at the finish, with less recovery time than she needed in June. I needed less recovery as well. It was hard to judge pace, but I'm not surprised to know that Liz bettered her time, as that was my subjective impression at the time.

I, too, hope that this inaugural event is just the first of many to come. They made this a very fun event, and it was obvious that they cared about doing it right, so it'll only get better from here!

kbierman- I haven't yet registered for Monumental but plan to do so soon in order to keep myself committed!!! I'd love to "team up" with you, Emily, and maybe we can get Taryn, Lana, and others involved, too!

Belated congrats on keeping up the good work. That was a great time under your June race. Definitely wear that shirt with pride!

I have heard you should do some sort of nutrition (gels or whatever) for 5K+ distances. My faves are zipfizz (as you know) and Cliff Shotbloks, which are sort of the consistency of those fruit snacks kids eat. I'm not a fan of gels, but that's just a personal preference thing. I like to eat a bit at a time, and gels are messy if you don't eat them all at once.

Hey Liz. I just ran my first 5k on Saturday, and I came across your blog today while searching for a training program for my second 5k! I used the couch25k program for my first one and now I want to increase my speed for my second 5k which will be on November 7. Sounds like we are running twinkies almost. Anyway, I see you say you barely trained for your second one, but I'm wondering if you will be training for your next one, and if so, what training program will you use? Just curious.

Sweet! Keep me posted on your Monumental plans :)