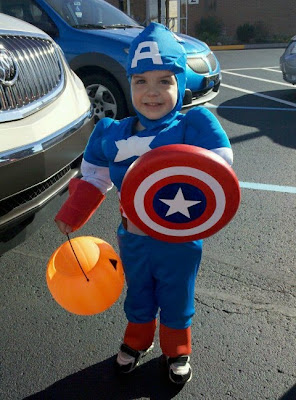 We had originally planned for Teagan to wear a pink shirt. However, when she got dressed for church, she put on an orange shirt. On the way home after church, she told me she wanted to keep the orange shrit on under her costume because orange is Daddy's high school's color. She even came up with her own little "Go Huskies!" cheer with pompom moves and everything. She was very proud of her orange choice- as was Daddy! 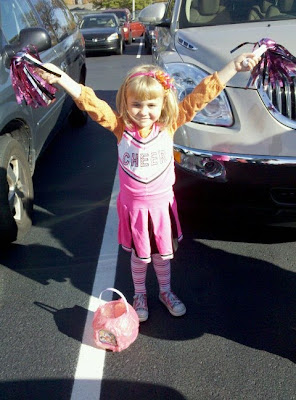 The shield was awesome. It looked totally professional. Post more pics of it please....

So how'd the pantry collection go as far as Teagan asking? I mean did the home owner say sure, close the door, run to their pantry and pick something?

Yup- sometimes another group of kdis would come up with us so they would get candy first and then the homeowner would go back in and come back with a couple of cans. I'm hoping we make this an annual tradition and our neighbors remember us next year for it!

Your family is totally awesome. Totally!

I'm glad you got your kids into the Halloween tradition and the pantry part is even a better tradition.
I wish there were more door to door visits but it does seem to go down.