Look What Jeff Made! 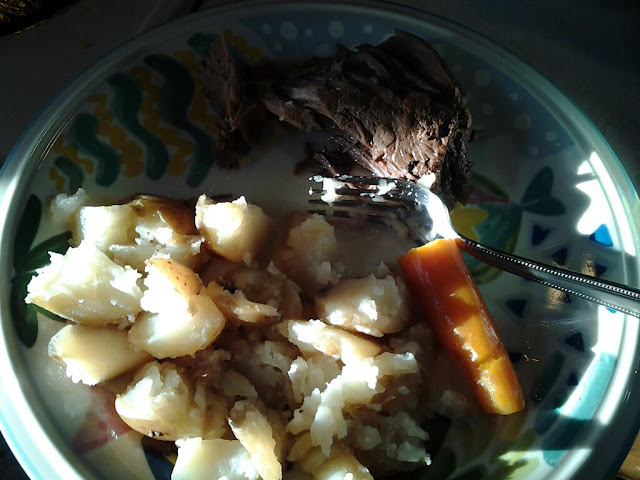 Friday, Jeff made dinner.  As you might recall, I shared our anniversary celebration a few weeks ago where we bought each other gifts in the traditional and contemporary vein of salt, linen, bronze.  One of the gifts I got Jeff- in the salt line- was a cookbook.  It was Teagan's idea to o in a cooking mindframe based on "salt."  The cookbook is the "Busy People's Slow Cooked Cookbook" by Dawn Hall.

He flipped through it and was inspired by a recipe called Beef Roast Excellente.  We didn't have exactly everything the recipe called for but it inspired a recipe we made up on our own.

He sprayed the crock pot with Pam and then poured in the Dr. Pepper and added the onions and pot roast.  Then he used Dawn Hall's pocket pouch for the potatoes and carrots to avoid the veggies becoming mushy.  This is where you use foil to make a pouch for your veggies so they stay out of the liquid.  He set the timer for 7 hours on low.  He stopped by home at the end of the cooking time and checked the meat with a meat thermometer and it was done.  He left the slow cooker on warm and opened up the veggie pouch and added the potatoes and carrots to the liquid in the slow cooker.  When we served up dinner... the meat just fell apart.  The potatoes and carrots were done exactly right.  On my plate, I smashed up my potatoes and topped them with sour cream and some bacon bits.

I am very proud and thankful... my husband did great!!

When can I come for dinner?

I seem to remember a time not too long ago when mealtimes were a bit of a stressful situation in your home. This post makes me so happy! (And hungry...)

And it made YUMMY leftovers for my lunch today. Plus, he made meatballs last night- I ended up working late and he had them out of the oven as I walked in the door. Love that man!

This sounds delicious. AND cooking with soda is a great idea.

Funny, I have the same cookbook. Sounds yummy. I'll have to dry that!