Why Are Yours So Big?

Zach is a funny little dude.  He's 4 years old now and he doesn't old back with what he thinks or feels and he doesn't get too flumoxed if he isn't right about something.  He enjoys being curious and learning through his mistakes.
And that means that he says some really funny stuff.
***
Jeff and I were in our bedroom and I was getting dressed for the day.  Zach walked into the room wearing his pj's (he sleeps in just pj pants and no shirt), just as I was putting on my bra.  He looked at me... closely... and his hands went to his chest and he said,

"Why are yours so BIG?"
***
Zach had started complaining about a week ago that his penis was hurting.  He complained at home, we looked and didn't see anything.  Complained at school and was checked (with permission) and nothing.  We have since located the issue and had the doctor check him this week and it's all good now.  However, last week it was apparently bothering him more than we knew.

He hurt his finger at school and was sent up to the front office to see Lori, the owner and director of the school.  He walked in, held out his finger and explained that he's hurt it.  Lori asked if he wanted a bandaid for it and he did.  She turned around to get the bandaid and when she turned back... he had his pants and underwear around his ankles!  She asked him what he was doing and he said, "I pulled my pants down so you can put the bandaid on my penis!"

I was brushing my teeth in the bathroom and Zach came in to use the potty (this is pretty normal around here).  He starts talking and isn't going to stop- he gets into that mode sometimes.

And a conversation with his sister over Halloween candy:

Teagan: Zachary, you have balls and I have balls! (She has Skittles)

Zach: I have balls! (eating Whoppers)

T: We saved our balls for last!

Z: My balls are chocolate!

T: Mine are fruity!

Z: My balls are crunchy!

T: Mine are fruity!

Me: We aren't watching any Christmas specials yet.  What comes before Christmas? 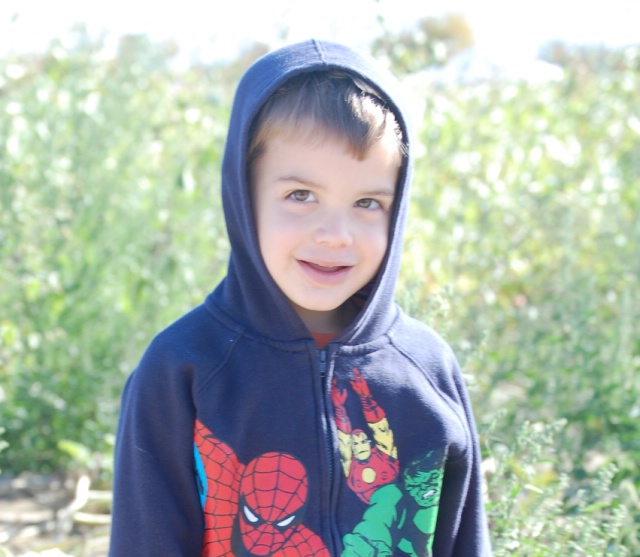 LOL. Has he done anything to embarrass you other than the bandaid thing? You know, the point at the obese person and comment?

I love that kind of curiosity but poor Lori. What a shock that must've been!

And technically, Zach is completely correct about August. I can see those two getting very competitive over such important matters!

Hilarious! Though I can't help think about how these stories will sound to Zach a decade or two in the future...hee hee hee... "Oh, but you were so cute, honey!"

The "ball" conversation is absolutely priceless!

Kids are awesome with all they say. Thanks for sharing this, it was a hoot to read.

The photo is perfect.

I.AM.DYING with laughter. This is too much!

He is such a funny guy!