It's a special day in our family!  We plan to spend much of this weekend celebrating.

I've shared her 4th, 5th and 6th birthdays on the blog.

This year, Teagan has been really interested in learning more about when she was a baby and when she was born and stories from my pregnancy.

The birth story that Teagan hears is:

For many week before Teagan was born, Mommy and Daddy would enjoy some time together watching a TV show called "Jeopardy."  We watched it every night at 7:30 and enjoyed trying to guess the answers before the players did.  On the day Teagan was born, we had gone to the hospital just after lunch time.  The doctors and nurses didn't think Teagan would be born until much later at night, but Mommy and Daddy knew better.  We told Teagan, in my belly, that she needed to be born before Jeopardy came on.

Now, for those who love a detailed birth story, I am glad to say that I did write hers out within a few days of her birth.  Sadly, I didn't do the same for Zachary- I was far more exhausted and his birth was a lot harder on me.  Here is Teagan's very detailed birth story: 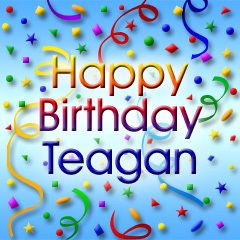 Thank you for sharing. Teagan is a very special person, just like her mommy!

I enjoy birth stories. Thanks for sharing yours! Happy Birthday, Teagan.