My daughter's mean side has come out once again.

I've written about our experiences with our daughter being a bully starting in Kindergarten, again in 1st grade, and realizing things about her personality that play into her bullying.

Last night, more evidence of her mean side came through.

Over winter break, Teagan had a playdate with a little girl in her class.  The playdate included another boy they are friends with and a girl that the host girl is friends with from her old school.  By all accounts from the kids and the parents, everyone had a great time.  Teagan has continued to be good friends with the 2 kids who go to her school.  The other girl has never been mentioned since.

Yesterday, I was checking the papers in Teagan's school folder to check her schoolwork and see about her homework for that evening.  My heart stopped when I found this: 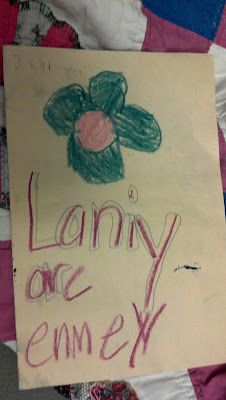 Looks innocent enough- until you read it.  "Laniy, are enmey."  Erased in pencil at the top "I hat you."

I stood with it in my hand and asked Teagan, "What is this?"

She froze.  She got upset.  She apologized.  I opened it up. 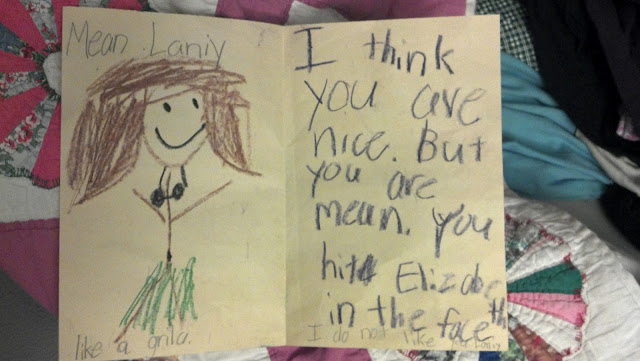 "Mean Laniy. Like a grila. I think you are nice. But you are mean. You hit Elizabeth in the face. I do not like your family."

Wow.  Now, part of me wanted to laugh.  Like a gorilla??  But most of me was hurting inside because my daughter had to have been filled with a drive to be cruel.  She had an audience- a friend in her class- that she showed it to and they laughed.  Then she put it away in her folder and forgot that she was bringing it home.

The back of the card. 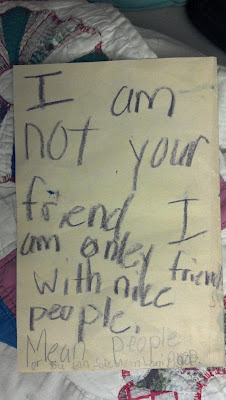 "I am not your friend. I am onley friends with nice people. Mean people or you (couldn't read the rest)"

Now, this kid doesn't go to Teagan's school.  This wasn't shown to this girl.  This wasn't seen by the in-common friend who hosted the playdate (she was out sick yesterday).  This was something Teagan says she did on her own and laughed about with another friend.

She cried.  She apologized.

I don't know how but I stayed calm throughout.  But I was pretty dang mad about it.

I talked about how writing such mean things about someone you don't even know really tells me that Teagan is feeling some yucky stuff inside of herself.  That I can tell she is feeling bad on the inside because her evening up until that point had been emotional and whiny.

So she didn't exactly bully.  But she pulled a mean girl stunt to gain approval from another friend.  I asked how she thought the in-common friend would have felt if she had seen what Teagan wrote.  I asked how Teagan would feel if someone else wrote that about one of her friends- or about her.

No TV in our house last night.  She was just sitting down to eat when I found it so she finished dinner, got a shower, off to bed.  Homework had already been completed at that point.  After she was showered and in her pajamas, I asked her to write 10 nice things about this other girl, "Laniy."  Jeff pointed out that she might not be able to since she doesn't know her very well.  I explained to her and to him- that's my point.  If you can sit down and writ mean things about someone you don't really know, then you can certainly sit down and write nice things.  10 nice things about this girl, 10 things about Teagan that are nice.

This morning, we talked about finding 3 ways to be kind at school today- beyond the basics of what she already does and already enjoys.

Jeff and I talked about our fears- that when she is a teen, she will be one of those uber-popular mean girls and will be heading up the Burn Book and tagging other kids to get picked on and directing her minions to do her bullying for her.  And that's why we address it every time it comes up.  We could have just laughed off that card.  We could have joked about it.  We could have made light of it.  We could have ignored it and just thrown it away.

But my daughter is someone who needs more than that.  My daughter needs some consistent redirection when this side of her comes out.  And that is what she will get from us each and every time something like this happens.

I don't have kids, but if I did, I hope I would've been as good a mom as you seem to be.

Wait, did Laney hit Elizabeth in the face? My impression from reading the note is that T thought Laney was nice, but then saw her hit Elizabeth, and is now writing her off as mean. It's pretty common for kids to react to one another in black and white terms like that.

I wondered about that, too. I asked about it without leading her to it. She confirmed there was nothing mean or bad that happened on that one playdate. That was over Xmas break- almost 3 months ago. According to T, Laney hasn't been a topic of discussion with her friends at school. And Elizabeth wasn't there yesterday so I'm not sure what triggered it. Talking to Teagan didn't give us any indication that this was an expression of figuring out something that had happened. Believe me- we tried our best to understand.

Wow. So the bit about L hitting E might have been completely fabricated? *sigh* You're on top of it, and handling it great, IMO. I give my kids a simple rule: in general, talk *to* people, not *about* them; but if you must say something about someone, pretend that he/she is standing right behind you :)

I think that you handled it very well. What I think is sad is that some people never seem to grow out of the mean girl stage. I watch D for signs of it as well.

Chickie has been bullied some by a boy in her class. (He tends to bully others too, but for a time, she was kind of a special target for him.) Her teacher is handling it very well, and thankfully Chickie isn't the type to be easily scared/intimidated.

But I have to tell you, your experience with Teagan has helped me. I have noticed in the classroom there is a special reward chart the teacher keeps for this little boy, and based on the rewards on it, I think the boy's parents are involved in this chart system too. I have found myself wondering if this is one of those kids who has GOOD parents, yet the child still chooses to bully. And you know why I know that's possible? Because of you. I've seen how you and Jeff are great parents, who struggle so much with a child who sometimes bullies other kids. And as I pray for this kid in Chickie's class, and pray for his parents, it has been nice not to automatically assume they are doing a bad job parenting.

So your experience has given me more understanding for the parents of bullies. Sure, some kids bully because they are bullied at home. But other kids bully DESPITE the love and acceptance they find at home. Those kids (like Teagan--and I hope Chickie's classmate) are blessed. Having the "right" parents could make all the difference in the world.

You guys are doing great. :)

you are an amazing mother. I wanted to start off by making sure you know this! I've been following your blog for some time and it's inspirational. I was bullied, beaten and tormented when I was a child and at nearly 23 I still have long lasting effects from the way I was treated... and those kids are still mean as adults! and their children are mean too. I still to this day cannot take a compliment because 10 years of my life I was told how ugly and stupid and skinny I was. I want you to know that what you are doing is amazing and you are saving future kids from having to go through things like i did! keep up the amazing work!!

As someone who doesn't have kids, but has so many friends that DO, I think it's nice that you & Jeff are working towards making T understand that she cannot behave like this because it's hurtful. You're actually taking the time instead of saying "That's bad, don't do it.." You're explaining WHY and what it could do to someone.

I think the 10 nice things is AWESOME. Good job with that one! :)

I absolutely love the way you handled this situation. And I generally love the way you are dealing with this overall. I have seen parents that think their kids will grow out of it. And some of them might. But most of them will turn into exactly the kind of teenagers you described. And then they'll keep growing up and turn into mudslinging politicians.

I, too, admire the way you handled this. That said, I don't see the "mean" part--If Laniy is mean, then she needs to hear that. Maybe I've read this too quickly, but it seemed like she was calling a spade a spade. Are you saying that she made up that Laniy was being mean?

btw, I looked up "calling a spade a spade," just to make sure I was using it correctly, and guess who popped up underneath it? You! You apparently used it in a post July 17, 2010.

Liz, your blog isn't asking me if I want to subscribe to comments via email anymore whether I use Firefox or IE9.