I became something of a crazy fan girl at Women of Faith.  It isn't my normal reaction to meeting someone "famous."  I haven't met a lot of famous people- but I don't get excited about or try to meet famous people, either.

But a couple of weeks ago, someone shared a quote by a guy named Mark Lowry. 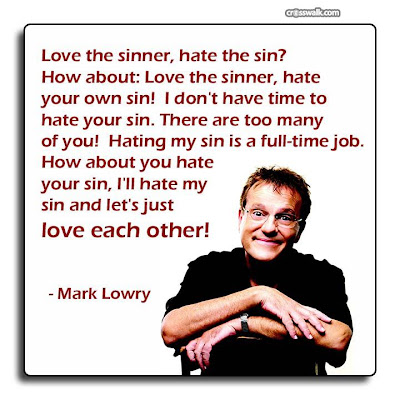 I was excited.  I thought it would be really... refreshing... to hear from this guy and what he had to bring.  I was eager for his humor and his voice.  And I wasn't disappointed.  And what he spoke about really spoke to me.

He finished his talk and they were getting ready to go into a break.  A few of my friends and I opted to make a dash to the potty before the lines formed.  We exited our section and I realized that we were seated right in front of the area that would be the space for speakers and musicians and other presenters to do signings and meet and greets at scheduled times.  And I saw a sign that indicated Mark Lowry would be there at this coming break.

I thought... you know, his talk really spoke to me and I did find so much of what I've read about him to be refreshing.  I think I'd like to just shake his hand.

Until he walked in.

And then I got all crazy excited.  And I maybe pointed at him as he walked past me and I maybe screeched at him "It's yoooooou!!!" And I got to step up to the table to meet him and have my poorly-lit picture taken with him and I kind of went all crazy.  I suddenly started talking about 90 mph and was gesturing and I might have giggled a lot, too.  It's kind of all a blur now.  But it went something like this...

Me: OhMyGosh! I can't believe it's you! It's really you! I am your newest but biggest fan- you have no idea. I didn't even know who you were a week ago and then someone posted this quote from you on Facebook...

Mark: The "love the sinner, hate your own sin" one?

Me: YES! That was IT! And I thought I have just got to know more about you so I went and read a bunch of stuff about you and liked everything I saw and then found out that you were going to be HERE in INDY and I was SO EXCITED and I just LOVED what you did out there and... *deep breath*  I totally follow you on Twitter and I'm a blogger and I am soooooo gonna blog about this!!!!

Mark: (signing the restraining order) Well, make sure you tweet me the link! 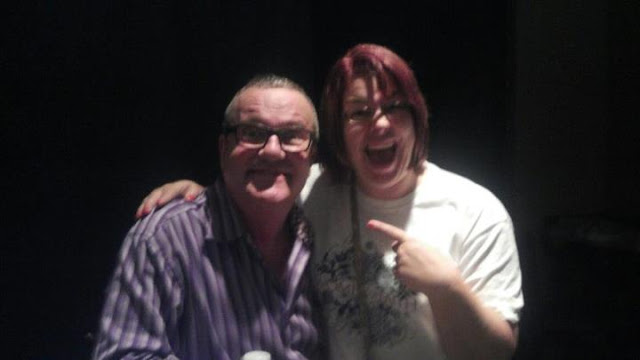 And even though I turned what could have been something poignant and meaningful into something crazy and fun (at least for me and my friends- we all had a good laugh at my antics.  Hopefully I was memorable...), the best part of the story is what I got from Mark's talk.

Last year, Women of Faith was very emotional for me.  And it was what I needed at that time.  This year, I've ridden the emotional train long enough and need more concrete help.  I get all the emotional stuff and I fully understand the stress that I've been under and the impact it is having.  I feel like I keep turning to God but that I'm missing something or that I'm not getting something right because there has been no change.

And then I got a nudge that I need to change how I'm praying.  Me and my nudges- when I get one, I've learned that I had better listen.  This one was that I needed to stop praying for myself.  I've been praying for wisdom and patience and strength.  My prayers are different now.  Because I'm fine.  The Big Guy's got me. I am wise and patient and strong.  My prayers are now focused on the decision makers in my company.

So as I came to Women of Faith, I knew I was hoping for something specific, something concrete, something to really help me keep moving forward through this "new normal" that life has become and shows no signs of stopping.  I figured I would end up with another emotional release.  But I got what I hoped for- I got what I came for.

Woah.  That one hit me.  Interruptions are when God sticks His head in.

And I started looking back at other times when God has pushed me past my comfort zone, other times that He's stuck His head in and interrupted my life.  I was living my life with purpose, I was doing what He asked, I was on it... and then there would be an interruption.  Like a call to lead a children's choir or like starting a healthy living group or like inviting people to church or like preaching through my blog or other avenues about love...

All of this work stuff- it's a bunch of interruptions.  From big things like added responsibilities and layoffs to smaller things like someone else's project becoming number one on my plate.  Interruptions.  And I can grumble and groan and stress about it or I can accept that there is a reason for this interruption.  I can't see it, I don't get it.  But I know it to be true.

Ever notice that when we look back on interruptions, we often see the silver lining?

So my focus is on seeing the interruptions for the blessings, the silver lining, or at least recognizing God's hand in what feels uncomfortable or stressful...

And one last quote to leave you from Mark Lowry-

"If your Jesus is a condemning Jesus, you've got the wrong guy! Fire him!"

Liz, you were just like you thought you were...very excited to see Mark. You were a hard act to follow! I don't think that there will be a restraining order in your future! I love Mark's last quote!!

What a great way to see those "interruptions." I want to keep that in mind. Thanks, Liz! (And Mark!)

I had not seen or heard of him before but I do love that quote, and am so glad you found what you were looking for at the conference. Also, the photo makes me smile.