Have you ever noticed how a letter or card can so quickly and easily brighten your day? My brother Ted is a sophomore at the University of Dayton. Ted has a good friend named Em. Ted and Em are BFFs. Ted and Em are thoughtful and kind and fun. See- Ted has always had a fun side. But it hasn't come out quite so often as it has since he started college, joined marching band and met Em. She brings out the fun in him, the happy in him. In many ways, they remind me of my friendship with Jim. He and I met in college- early in my freshman year. And we brought out the best in each other. We aren't close in location anymore and I miss him a lot. But when we talk- and we always talk when there are Big and Important Things going on in our lives- we are instantly as connected as we always have been. At worst, that will be how Ted and Em end up. At best... well, the possibilities are endless.

Yesterday, I pulled a thick envelope from the mailbox. Ted had warned me that it was headed my way- and I'd been watching for it. And what a treat it was!!

A letter from Em to Teagan. The "ice cream ketchup" reference goes back to when my kids, my mom and I had dinner with Ted and Em over the Christmas holiday when they were in Indy for a conference. 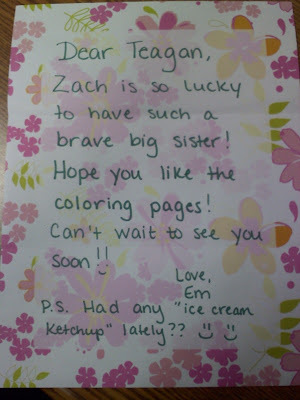 A letter from Ted to Teagan. Personally, I love the hand drawn edging. 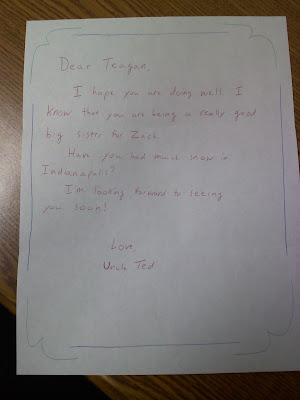 A get well card from Em to Zach (in reference to his procedure 2 weeks ago). 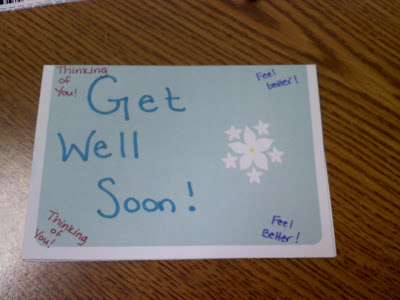 The referenced coloring pages were a big hit! The kids were really excited because the pages came from their favorite TV show- Dinosaur Train! 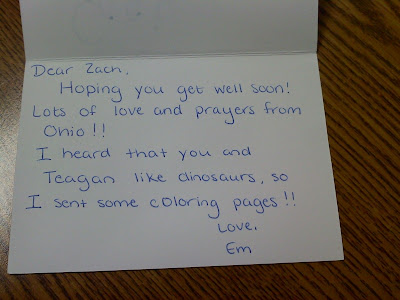 But the card that made me cry... from my brother to my son. 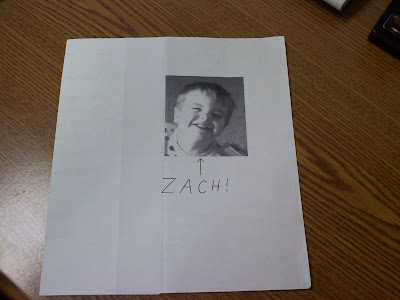 You can click on the picture to see it larger and read the words better. 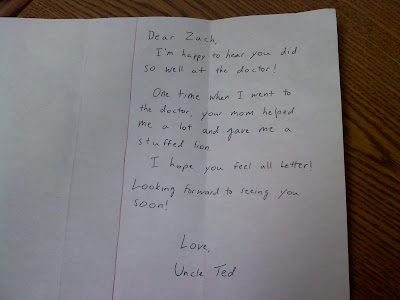 When Ted was around 5 years old, he had to have his tonsils removed. As any child would be, he was nervous. In fact, he might have been a bit more anxious because he was kind of a high strung kid. I bought him a stuff lion. I told him that this was Brave Lion. Anytime he was feeling scared or hurting, he just had to give Brave Lion a squeeze and Brave Lion would share his courage with Ted. This is the second time in his adulthood that Ted has mentioned Brave Lion. It touches me deeply that my small gesture had such an impact. And that my small gesture is being passed on to my children. And apparently this propensity for letter writing and card making runs in the gene pool. Teagan knows that Mommy's been sick. So she made me some get well cards. 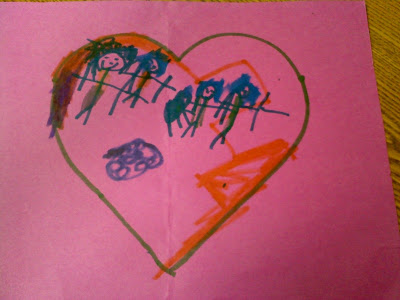 This cracks me up- she is so proud to know my name. She read the card to me when she presented it and her face just beamed when she said "Liz." It was adorable. 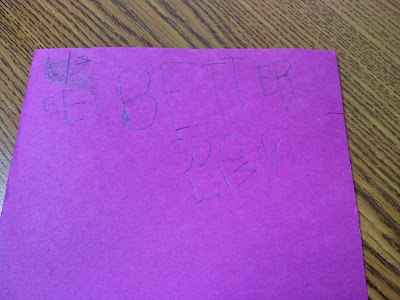 A picture of Mommy and Teagan, hanging out. 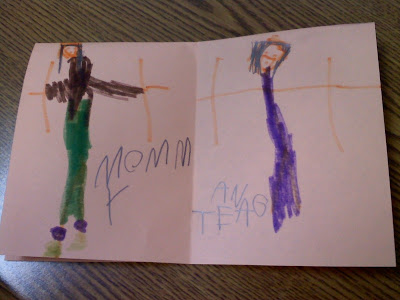 She said this paper was really special for this card- because it was shaped like a letter L... you know, for "Liz." 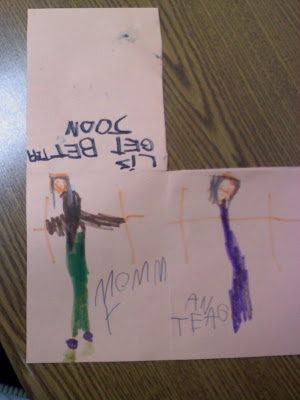 So my mail- both from the post office and from Teagan's back pack- certainly made my day brighter. How about you? Do you send out cards and letters? Do you love to receive those little notes? Even online greetings are a reminder that someone is thinking of me. I think I would like to be one of those people who sends out little cards from time to time- just to let you know that I care.

I am not what most people call a "thoughtful" person. I never remember people's birthdays. If I want to send a card to someone who is under the weather, but the time I get around to it, they are all well and back to normal.

I will occassionally see a card that I think someone specific would like, so I buy it and then six months later find it on my desk, still in the bag, unsent!

I once forgot my own daughter's birthday! (She was just a teensy bit hurt!)

I do like receiving cards, but most of my friends and family are more like me than not, so I don't get very many.

I'm a little better with email and FB and birthday wishes, etc., but that kind of lacks the personal touch.

When I do remember that I want to send something its usually in the middle of the night, or riding in the car, or at the movies and then I promptly forget it.

So I guess the answer is no I don't send and I don't get, but I wish I did both! I wouldn't suggest holding your breath.

(I'll tell you Happy Birthday now, 'cuz I'll probably not get it done around your real birth date!)

Yes, there is something SO special about a hand-written card or note--even more special than before we had email!

Owen is starting to get into mail, and it is so neat, as a writer and English teacher, to see his emerging communication skills.

I hope he still values pen and paper as he gets older. Quicker is not always better. (She writes on the computer...)

We are huge note-leavers!! My daughter and husband both get notes from me during the week stashed into school bag or wallet.

THen my oldest made little mailboxes and attached them to everyone's bedroom doors and leaves everyone little pictures!

We just eat that stuff up!

Aw...those are so cute! I love little kids writing--SO adorable! :)

Such sweet cards and a great reminder that I need to get to work and start sending some out!

Teagan being proud to know your name reminded me of my nephew. When he started talking, he took to calling my brother (his dad) by his first name. My brother didn't like it so much, but I thought it was hilarious.