We had a fantastic opportunity to attend a family event for Valentine's Day at the Children's Museum on Saturday evening. The theme was Heroes and Heroines. We could have dressed up... I thought about going as Gwen Cooper or Rose Tyler and Jeff could have gone as Captain Jack or The Doctor... but the family decided to just go as ourselves instead. We walked in and laughed at the site of villains instead of heroes! Stormtroopers? Ack! 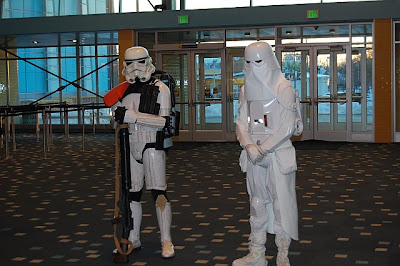 The museum recently had a big Star Wars thing going on- so I guess they had a lot of leftover costumes. 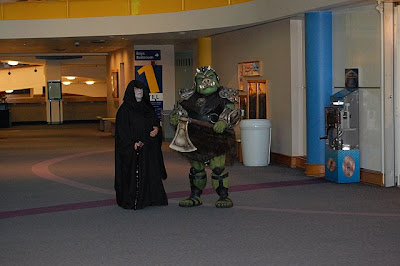 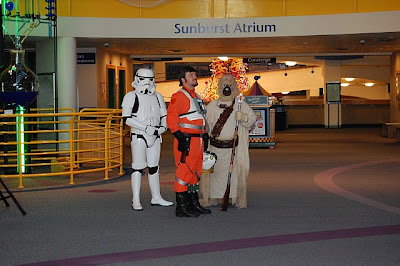 We ate dinner- it was a buffet with a great menu. A mixed greens and spinach salad with mandarin oranges, strawberries, raspberry vinaigrette dressing and candied pecans. Grilled chicken breast with a champagne sauce. Mashed red skin potatoes (topped with cheese). Very al dente mixed veggies- squash, green beans, etc. There was a hot beverage bar- coffee, tea, hot chocolate- and all the fixings like whipped cream, flavored syrups, etc. I enjoyed a hot chocolate with blackberry syrup- so good! We barely tasted the food. The kids were far more eager to start running around the museum so they barely touched their food. Jeff and I gulped down our meals and we were off! These special events are held after hours. The tickets prices are crazy expensive, IMO. Thankfully, I was fortunate to be able to attend at no expense to us. But the great meal... and then having a "small" group of families in the museum- you felt like you had the place to yourself the entire time! We rarely ran into anyone else in the exhibits. First stop- top floor and a double ride on the carousel! 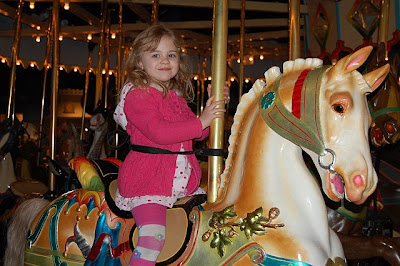 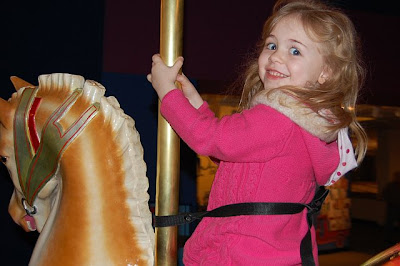 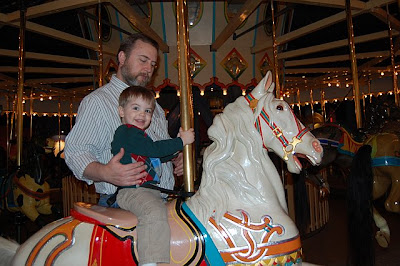 From the carousel, it was straight into the maze. Mirrors and peek throughs and wall holes to escape through... and mom and dad could relax without worrying that the kids would get caught up in a group of other families and end up lost or hurt. 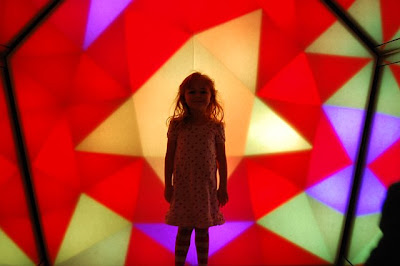 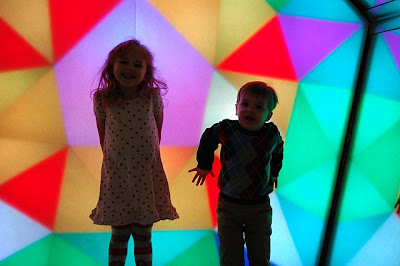 Love this pic- Zach moving too fast to be captured by the camera but you can see Jeff and I in the reflection! 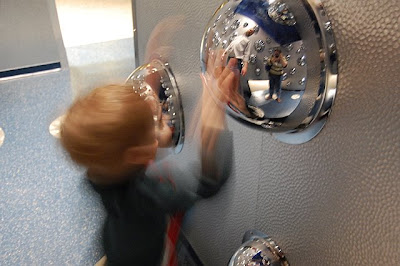 Next, we headed across the way to ScienceWorks. We normally avoid this area because it is designed for kids older than ours. But there is a lot for our kids to enjoy when there isn't anyone else there! i think Zach would have stayed at this ball thing the entire night. They got to play in a construction zone, climb around in an "underground" slide area, and play in an real life house- one that lets kids be in the kitchen, bathroom... learning about health and fitness and good food choices. 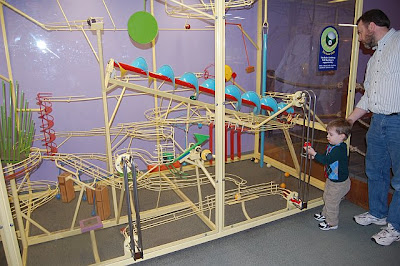 There is a special traveling exhibit in the museum right now- Barbie. Funny how the exhibit can so quickly zoom you back to childhood. I had a good amount of Barbies- but no vehicles or pets or dream houses. Lots of handmade clothes- and most of my dolls had chopped off hair (thank to my crazy hairstylin' skillz). And I have to admit to wanting Barbies... I had friends with crazy Barbie collections. So this exhibit- while designed to have a lot of child interaction- also had amazing displays of Barbies and gowns and outfits and so on. Teagan got to meet the "real" Barbie! 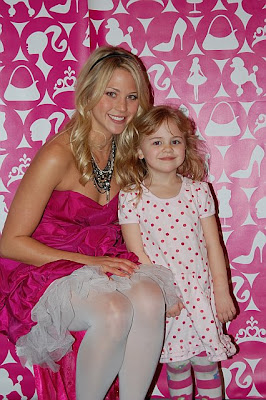 She got to go backstage and check out the make up artist area, the hair styling area, a Barbie play area, and oodles and oodles of barbie dress up clothes. Then it was out to the runway! By the way- this is the only pic of me you'll see. Jeff thinks it's hilarious that I'm back there, peeking out at what's going on. 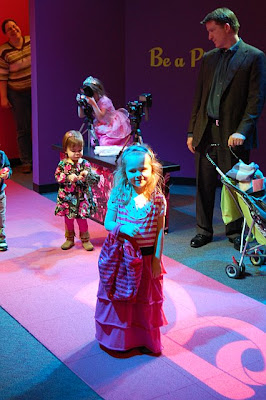 Zach got in on the action, too. He was enjoying some of the dress up clothes- mostly being infatuated with headbands. But when he found this barbie phone that actually talked to him... he was in heaven! 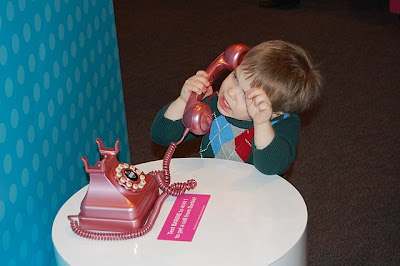 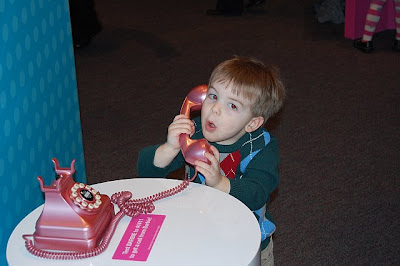 Next we headed to the other temporary exhibit- Bob the Builder! So much to see and do in this space! The kids had a great time building and fixing and gardening! 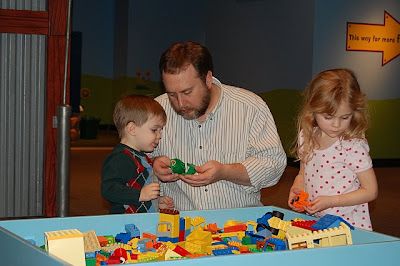 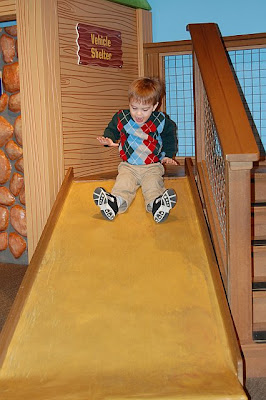 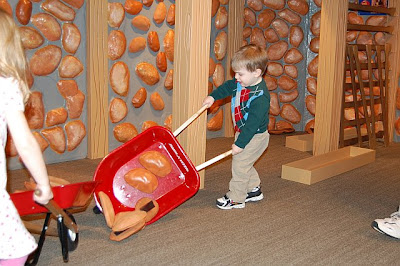 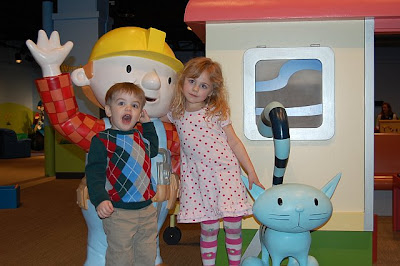 Jeff and I aren't real big on the romantic side of Valentine's Day. When we were dating, we did the romantic gesture thing early on. But we both were of the opinion that romance should be a year round thing... it's the small, every day, once in a while, just because, and all the time gestures that really matter to us. I'm not against V Day. But I think we both really like celebrating it with our kids. We loved having this special thing to do as a family, to celebrate our love for each other. I also took pictures of the special, permanent display of Dale Chihuly's Fireworks of Glass. This was a special exhibit several years ago and there is now a permanent center sculpture of glass as well as a play area underneath. I'm sharing these pictures on my photo blog- mostly because the black background suits the colors better. But I did enjoy this pic of the kids... I tried to capture them laying on the floor, staring up into the ceiling, with the reflection of the ceiling on the floor behind them... 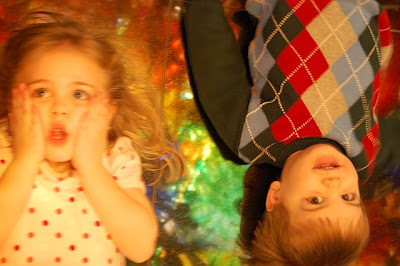 Hope you enjoyed your Valentine's Day- no matter how you chose to celebrate it!

What a great looking kids' museum. You're lucky to have it close by. Its amazing how some are soooo much better than others!

As usual, superb photos. Looks fun. Jim and I always have fun at the interactive museum. Who needs kids?

I remember an acquaintance in college played Barbie for some event. She was beautiful, with a fantastic figure, but still had to have plenty of padding for those big Barbie boobs. :)

OK that was such a fun day!!! I just love days like that!

We all played scrabble on V-Day and just spent the day together all in our jammies.

There is a Chihuly at the Mayo Clinic that is very breathtaking!

What a wonderful Valentimes Day! That sounds perfect; I would love to go to an event like that because in the past, when we have done the museum thing, I feel pressed and rushed and anxious, and the kids never get to stay as long as they want to at certain exhibits. Your night sounds lovely, and all the better for not having had to pay!

What a great day! All of the kids look like they enjoyed themselves!

Wonderful pictures! Thanks for sharing!