It's 3 hours since I finished the 10K. I'm still kind of in shock that I did it, I think.
I had several old school runners tell me that I'd be hurting myself running in my Merrell Barefoots for 6.2 miles. That my knees and ankles would be shot. Guess what? My joints were fine and the hip pain is something that I know what caused it and how to fix it. I ran a 10K in minimalist shoes. I'm still shaking my head over that one. I completed a 10K.

Pics of my feet. Just to show that my feet didn't take huge damage by wearing my minimalist shoes, these are pics of the bottoms of my feet once we got back to the car. I think I would have had less of a blister on my left foot with improved form and if the conditions had been dry. 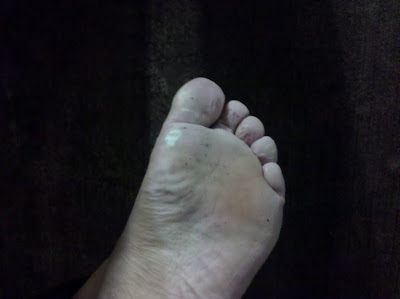 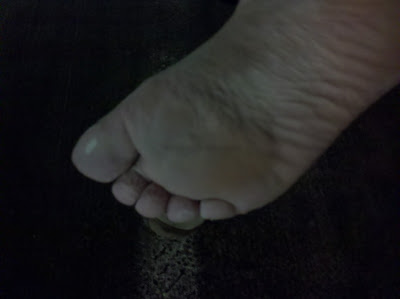 Left foot once I'd gotten home, made lunch for the kids, gotten Jeff out the door for a fun afternoon with his friend, gotten the kids settled in front of the TV, and I'm about to finally get a shower: 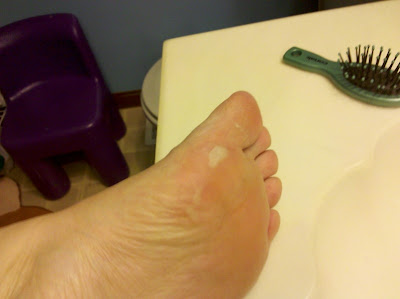 Much thanks to my friend Emily for snapping this pic of Christy and I as we are about to cross the finish line!! 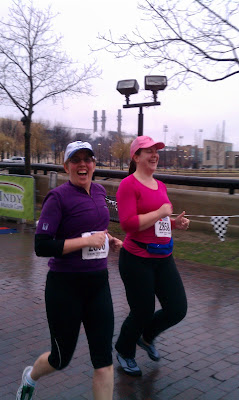 Kudos to my fellow runners- Ashli, Emily, Carol, Christy, Jessica, Amber, Tori, Kyle's dad, the guy who basically ran with us the entire way, Aaron from work and his wife, and I'm sure there are other people I knew down there. Kudos to the volunteers who stood in the cold and rain and handed out water, blocked traffic, directed our route. Our favorite volunteer from the last race was there- near the end, full of energy and encouragement.

You Rock Liz! Thanks for an awesome day! I am still in euphoria that we actually ran a 10k this morning!

Liz!!! I am SO proud of you! You were ready for this! You did awesome--wow. I hope you have a high from it all day.

My first 10K last year was an amazing experience. I'm so glad yours was too!

Wet feet very, very, very easily get blistered, whether in regular running shoes, minimalist shoes, or barefoot. It doesn't even necessarily mean you had bad form. You may not have gotten blisters at all had it been dry.

Wooohooooooo!! Way to go, Liz!! You totally rock. Loved reading about your experience. :-)

wow....I couldn't even imagine doing that....I've started eating healthy.....and I cut soda out of my life:( I miss my Coke. Congrats on finishing and within your goal. Keep up the great work.

Hooray for you, your knees, your lungs and your feet! Love that you're still smiling at the finish line. I guess there's no doubt you've caught the bug but good!

Yahoo for you!!! I finished my first 10K last week and am still basking in the glow! The blisters will heel but the feeling of accomplishment will stay.

Go Liz!!! I'm happy for you! I am thinking about doing a 5K this summer.

Congrats! You rocked it!

You are an inspiration, my friend!

And I'm going to definitely have to learn more about these minimalist shoes. There was a lady at my 5k that did the whole thing literally barefoot.