Saw my doctor last night. Described what running is like for me. He asked when it started and I had to say that I've honestly only paid attention to it the past few months. Thinking back, I'm starting to see that I've most likely had this affliction all along but just assumed my struggles were because I was out of shape.

It took Christy pointing out to me that "in anything else that we do, you've got more energy, more stamina, and more strength. It makes no sense that you can't run stronger than you do."

Doc said that what I was describing was pretty classic Exercise Induced Bronchospasm. I described how I feel when running- that after a walking warm up of a few minutes, I can run about 3-4 minutes before I just feel like I have to walk. My frustration is that my body still feels strong and able but I just have to stop running and walk. Then my running intervals get shroter and shorter. And when I run an actual 5K event, I see that finish line, I sprint for it- because my body still has power left in it- and end up crossing the line and being compeltely unable to catch my breath for a few minutes. I wheeze and feel like my throat and chest are tight.

I thought I was just really out of shape and that carrying this extra weight meant I was still more unfit that I was willing to recognize.

My body is strong. My breathing was not.

I described for my doctor how it is at church some Sundays. We have "Meet and Greet" after the second song. In second service, we sing another song after Meet and Greet. Sometimes, you have to dash back up front to get to the mic before the song starts and on those instances, I have trouble singing because... I can't get my breath.

He said that's another classic sign and that he's treated singers with the condition. I have a friend at church who has a daughter who has to use an inhaler before playing her musical instrument (some breath based).

I told him that when I ran on Monday, I used my friend's inhaler and my run was a completely different and enjoyable experience. That when I had to stop to walk, it was because of a stitch in a muscle and I could recover very quickly and would be eager to get back to running. Plus, I took about 5 minutes off my time!

Do you have any idea how eager I am to get out and run with my new running gear today?? 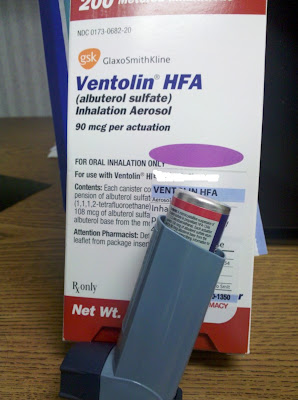 Glad to hear that you got an answer -- and a seemingly easy solution. Beautiful day for a run today. Enjoy it!

that's so great to hear! I think it will really help you on Saturday too- can't wait to see the difference it makes!

I find that now that I am on Singulair daily as well- I take 1 or two puffs of the inhaler about 20 mins before I run and it makes ALL the difference for me.

I hope this really helps!

I'm glad you've got some answers. Look out running world, Liz is about to rock you!

Oh Liz, I am SO glad you found out what was going on! What a relief! I just saw your DailyMile report and it sounds like you're rocking it now. Woo hoo!

And a word of encouragement for your 10K--you'll do it! You will! You don't have to be fast; you can walk as much as you need to--but you WILL DO IT. You'll go through that finish line and you will feel amazingly proud of yourself!

I'm glad you resolved it so easy. at first I thought to myself, self, cause I often call myself that, is this "Exercise Induced Bronchospasm" a made up thing? Like I have Diet Induced Flabospasms and should stop dieting immediately. Then my mind wandered just a little more. I wonder if the actor that played Twiki in Buck Rogers was naked under that suit?

I have a very mild case of asthma and I definitely notice a difference on the days I remember to use my inhaler.

So glad you found the answer and that it's an easy fix!