The great secret that all old people share is that you really haven't changed in seventy or eighty years. Your body changes, but you don't change at all. And that, of course, causes great confusion. ~Doris Lessing
Some people, no matter how old they get, never lose their beauty - they merely move it from their faces into their hearts. ~Martin Buxbaum
Every living creature, every living thing, every one... we all age. From the day we are born, we are thrust onto this fast moving locomotive that takes us on this journey that we can't stop. For some, the journey ends sooner than for others. The rates at which our bodies and faculties deteriorate is different for each of us. Gray hair Aching joints Cataracts Hearing Loss Fatigue Just a few signs of aging that you one day realize are suddenly there. Things that you knew were coming but you hadn't noticed before. Things that happened each day before your eyes but that never "clicked" as being the signs that they are.
Old age is the most unexpected of all the things that happen to a man. ~Leon Trotsky
The approaching of Old Age. It's a joy to reach it, in many ways. A long life. Hopefully satisfying and fulfilling. Hopefully leaving a positive impact on those who surround you. And as we face Old Age, we face the other inevitable. The point when the locomotive, still moving fast even if we are no longer able, stops. Either grinding slowly, brakes squealing and fighting or slamming to a sudden and instant halt.
Age seldom arrives smoothly or quickly. It's more often a succession of jerks. ~Jean Rhys
It's difficult to feel the changes in yourself. It's difficult to witness the changes in a loved one. 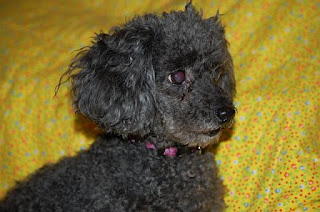 I never had a dog growing up. One of the first things I did when I became "independent" was to get a dog. That little black pooch up there. Sassy. She's a toy poodle. She'll be 11 years old this September. I've been her Mama since she was 8 weeks old. She's been by my side through a divorce, a new marriage, a miscarriage, the birth of 2 children, the loss of our other dog (Ginger), and much more. Ginger's passing was very hard on Jeff and I. But I dread Sassy's even more. She doesn't get the time or attention that she used to get, pre-human babies. And I have to admit that I went from being one of "those" dog owners who believes her dog is her baby... to having children and realizing that Sassy is a dog. Not a baby. A spoiled, sweet, patient little dog. 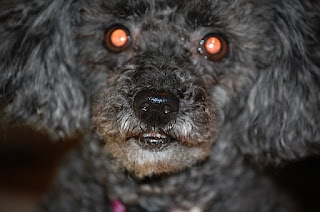 She isn't sick or anything. Nothing big going on. Just the eventual end of the ride on that locomotive. She still plays with my kids. She still spins when we first get home. But the little things... her night vision has dropped significantly. Her hearing is starting to miss the little cues. Her eyes are showing signs of cataracts. While still playful, she spends more time sleeping, napping, laying down. Her black fur is turning gray. She's a little stiff in her joints in the morning. A little less sure footed going down steps. But she's still my Sassy. Has been for 11 years and will be for 11,000 more. Always.
Blessed is the person who has earned the love of an old dog. ~Sidney Jeanne Seward
Labels: dogs, pets, sassy

Never fear, dear--you probably have more time with Sassy than you think. My folks' 14 yr-old golden has been declining over the past year, and I thought the end was coming, but in spite of being nearly deaf, blind, and unsteady, he's still charging. But it's good that you have to time to appreciate the time you have, while you still have it. :)

I WANT A DOG!!!!
=0(
we are renting and both James n I work fulltime so don't really have time for one.
I grew up with dogs and adore them
to bits.

On of William's CDs (http://www.coloursarebrighter.com/site/) there is a song about a dog getting old. Made me cry when listening.

James is the same, he cried at the Futurama episode "Jurassic Bark" for more details go to: http://en.wikipedia.org/wiki/Jurassic_Bark

I know that when I was younger and one of our 3 dogs had to be put down because of old age, it was one of the most heart-wrenching experiences I had to go through. To this day, my mother still fears going through that again and so has never gotten another dog since in spite of how much she loves them. I can't wait for the day that I stop traveling so much so that I can become a dog owner once again. Sassy is sooo cute. I'm sure she has brought your family so much joy over the years.

What? I can't see you... my bones are too brittle.

Augie sends his regards. He'll be 15 on April 4th.

Our 14 year old Lucky sends love to Sassy. He's going to the Bridge soon so we're just biding our time, blogging on Doggyspace. Our home will be very different without him. The Big C isn't being very kind to him.