Such A Good Dog

Have you ever had a dog- or other pet- that just was an amazing animal?  That you think back on with so many fond memories?  That you wish you could duplicate?

Ginger was that dog for us.  She was a fantastic and sweet and patient dog.  I think part of why we hold back on getting another dog, aside from letting our toy poddle live out her senior years in peace, is that no dog will ever compare to Ginger.

Recently, I was looking at old baby pictures for a kindergarten graduation project for Teagan's school.  And I came across some pictures of my baby with my dog and was reminded of what an awesome pet she was.

I think the reason she fell in love with Teagan was the constant promise of food dropped on the floor. 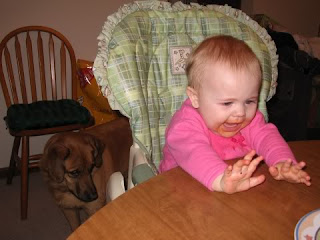 Ginger made tummy time fun and something to look forward to- she always rewarded Teagan's head lifts with some sweet little kisses. 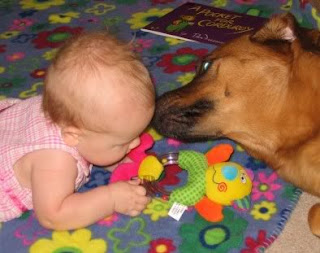 And as Teagan got to be more upright, the kisses became more frequent! 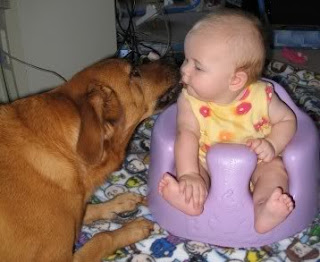 Ginger was extremely tolerant of touches and was often the object sued to pull to a stand on.  She sometimes would look to us- but always in more of a "are you sure she's ok" way and never in an annoyed way. 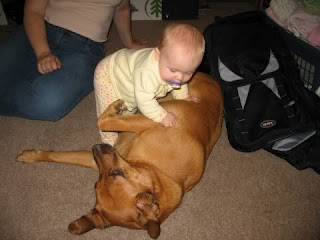 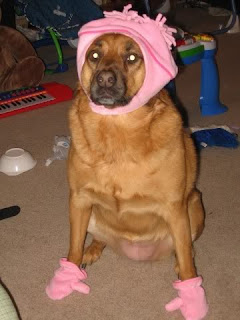 My biggest sadness was that Zach never knew her.  Teagan still talks about Ginger and sees dogs that look like her and will point them out to us.  Sometimes, like Jeff and I, she still gets sad when she thinks about Ginger.  Zach would have loved her.  I can just imagine how they would have played- I think Ginger would have become Zach's dog.

Awwwwwww. She looked so sweet with Teagan!

Dogs make such a big impression on us. It must be that unconditional love. Sorry for your loss and that you are still missing her. Hopefully the right dog will come along to fill that void, maybe even sent by Ginger from heaven. You never know!

I had a cat when I was young and that cat would let me put him in baby doll clothes, put him in a toy baby doll crib, tuck him under blankets and roll the crib around the house like a stroller. He was the best cat ever. AND, he wasn't supposed to sleep inside (he slept in the garage) but sometimes I would tuck him under the covers next to me and he would sleep with me all night long. He was awesome.

Well, what are you waiting for? Every kid needs a puppy you know...

Loved that first shot--Totally reminds me of shots I have of Cooper.

My mom had a dog like this that died last year. He was the sweetest dog. I used to take him running with me and he loved it. Except that he was scared of cats and hated when we passed a certain house down the street.

She got a puppy a few months after Cody died and this dog is every bit as sweet.

You can never replace the personality of one with an identical dog, but you can have great memories with a new one. Some day when your family is ready.