They Love Each Other

In August of 2009, my first born left the safety of home daycare and ventured into the world of big girl school.  She started preschool and was so very excited...

Until the day she realized she was going to have to leave her baby brother at daycare while she traveled to preschool.

Up until that point, they'd been in that home daycare together.  Since he was born.  Together.

It was an adjustment for her.  We made a small photo album filled with pictures of Zach and of the 2 of them together.  She carried it in her backpack and found great comfort in knowing that she could look at those pictures anytime she was missing her little brother.

For the past year, they have been reunited.  They have both attended this preschool- Teagan in Kindergarten and Zach in the earliest class possible.  The school has 3 preschool class levels and 1 Kindergarten.  They come to school together and get to spend the morning together and usually spend at least some of the end of day time together, too.

My kids love each other.  I'm very blessed.  They love to play together.  Zach adores his big sister and wants to do everything she does.  Teagan loves taking care of her little brother but also values him as a playmate.

I'm realizing that this is a precious and potentially fragile time in our little family's timeline.  They are very best friends.  At this point, there is no outside influence of a peer group for either of them.  They have friends at school and at church but the boundaries of age are fuzzy and both include each other quite nicely.

We are about to face a new transition.

Teagan will go to public school next year for First Grade.  Zach will remain at our happy little preschool, moving up to the next preschool level.  He has at least 2 years of preschool to go and might go to Kindergarten there as well.

Yesterday, the kids were doing a dino dig (a special project brought home from school that I'd saved and dug out this weekend- it's a block that the kids dig in with special tools and they discover and dig out dino bones).  Teagan asked me when she would get to visit her new school.

I explained that I needed to make a phone call and find out what we needed to do to get her signed up.

Zach said he wanted to go to Teagan's school, too.  Teagan said she wants Zach to go to her school. 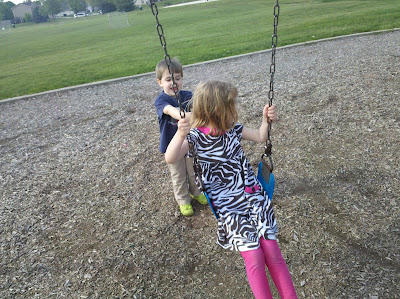 I explained that this school doesn't have classrooms for younger kids and that we were very lucky to have a place where they could be together for the past year.

Teagan jumped up from their little table and hugged Zach and told him, "It will be ok, buddy! We'll make you a photo album just like mine and you can look at it anytime you miss me!"

My insides got very mushy at that point and I had to walk away so that I didn't fall apart. 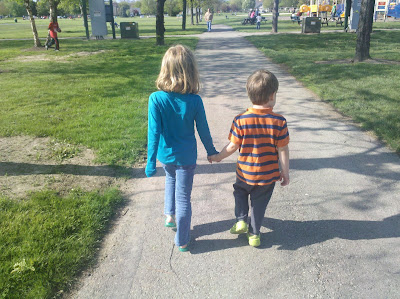 My hope is that we can preserve this fantastic love they have for each other.  That we can foster continued growth of this relationship.  I can feel that there is a very real chance that they could be friends for life.  Part of why Jeff and I feared having more than one child is that neither of us really know what a great sibling relationship can be like.

Christy has it.  Christy and her little brother are very close.  Sure, they might annoy one another from time to time.  But they sometimes travel together, they have similar interests, they share stories and laughter quite often.  They talk on the phone just to talk and stay current.  They aren't afraid to say, "I love you."

I have 2 brothers.  But we don't have shared childhood memories.  I was a teenager when they were born and had moved on to college very early in their lives.  I really feel like shared memories of childhood is part of what bonds siblings together.  I love my brothers and I love the relationship we do have.  I'm enjoying watching them grow into young men and get ready to face the world.

Jeff has a sister but they are 10 years apart and had vastly different experiences in their shared childhoods.  They grew very much apart because of some of those things that went on.  In the past 10 years, I've seen them grow closer and that's a true blessing.

So neither of us knows what it is like to have a sibling that you truly love and adore and would call a close friend. 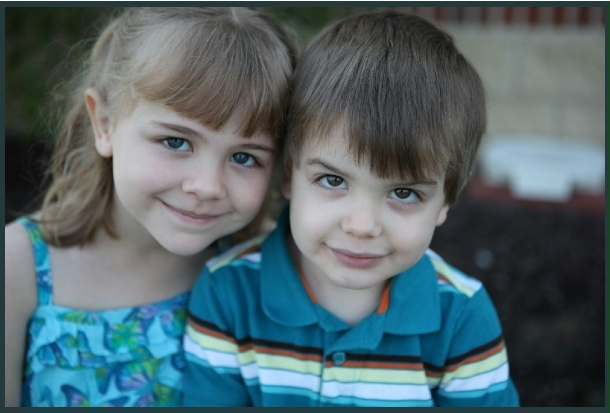 Being able to witness that in my kids is such a gift.  Managing the responsibility of fostering it can sometimes be a bit scary and overwhelming.

But mostly I just sit back and enjoy it.

Zach is your blessing! I remember one of your first posts about being content with only one child. Look at your beautiful family now. I admire how you appreciate the gift of love between your children. Priceless emotions, huh!

One of the things I adore most about Drake is how awesome of a big brother he is to Avery. Recently I picked him up from a bday party and the Dad said something like "he must be a great big brother because he spent time playing with the little sister of the birthday boy while all of the other kids ignored her". I try to remember those sweet moments when they're fighting over something trivial!

I just pray that someday my kids can be like that. They pretty much hate each other and fight 24/7. It is exhausting!

My younger brother and I were really close until I started at the public school. Then we started into the sibling rivalry. We sometimes got along and sometimes fought horribly. It's just part of growing up. Nowadays, we are SO close and I'm glad because he's one of my best friends.

The Lovely One said...

My kids are very close for now, and I love it! Of course, they're only 5 and 2 right now, who knows what it will be like in ten years when they're 15 and 12!