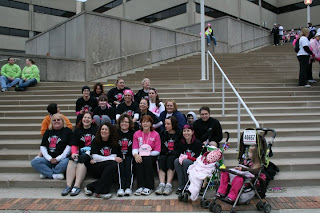 ﻿I made new friends and spent time with friends I've had the honor of knowing for a couple of years now. 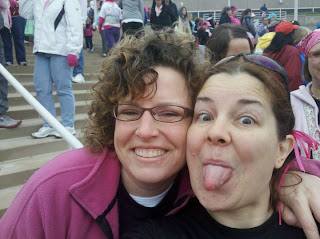 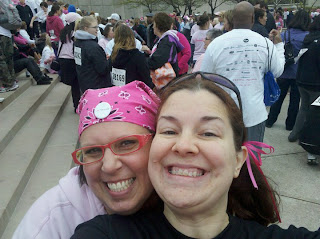 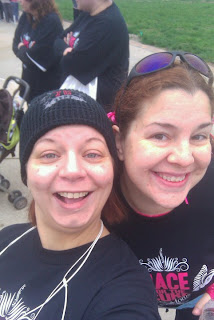 Just like last year, the most moving part of the event was the Survivors' Parade before the walk/run started.  You have to arrive early- it starts at 7:30.  But to cheer and high five women who fought cancer 20 years ago, 10 years ago... to applaud the women who are 5 year survivors... to see the pain and pride and the tears in the eyes of the women who are 1 year survivors, many showing signs of still being in the trenches... it's an immensely powerful event.

My favorite moment from this year's event was when I got to help a 20 year survivor in the parade.  She was pushing her husband in his wheelchair but the ground was very muddy and they were struggling to make it down the path.  I didn't think about- I just asked if she wanted help.  She and I each took a side and lifted from the front and pushed from the back and made it down the path together.  For those few mintues, I got to be part of this little family and they were such kind, loving people.  I was honored to have a small part in their experience.  Later, it hit me that no one else had offered to help her.  I was rather surprised by that.  They'd already come a bit down the course and there had been event volunteers and volunteers specific to the parade.  But no one else offered to help.

After the parade, our team headed to our meeting spot for our group picture.  We headed indoors to use the facilities and then came back out.  Soon, it was time for the few runners to head to the starting line.  The 3 of us headed out- and this pic almost captured my heel kick of celebration!! 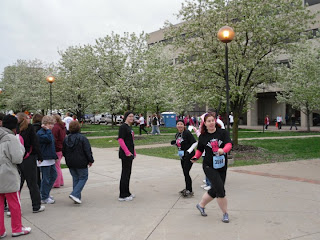 Last year's 5K was filled with learning.  I was still so new to running.  My focus was on what to eat, how to fuel, how to hydrate, how much sleep I'd gotten, what I wore, and so on.  I wasn't sure when or if I'd be able to run at all.  I ended up only running a bit and walking msot due to the crush of the crowd.

This year, I was focused on just having fun.  This was a 5K- a distance I get close to on my lunch hour runs.  This is a distance that is normal for me now.  I could completely focus on the purpose of the event and why I'd been working to raise money for Susan G. Komen of Central Indiana.  As I ran, I focused some on my form but more on why I was running.  I ran almost the entire first mile.  And when I felt tired or wanted to walk, I thought about the people who had donated in support of my efforts.  I thought about the reason I was running.  I thought about Michele and Tim and the kids and her sister.  I thought about the life they now live without her.  And I thought about the importance of taking care of yourself, of knowing your body, of pushing for care and answers and treatment.  I let myself revisit those days back in 2009 when I ended up involved with this family.  And I ran.  I didn't run my fastest or my best.  But that wasn't why I was there.

I was racing for the cure.  And along the way, I realized more and more that the slogan of the event was true.

It sounds like you had a great time. What a special event!