I thought I would have a lot to say on this subject but I'm finding the right words are hard to come by.
Sometimes, feelings are easy to describe. And I can tell you that my feelings in regards to my husband include:
love
passion
friendship
security
trust
loyalty
But to really make those words stand out is the challenge. I can't describe them well enough. And I'm not much into the cheesy "soul mate" stuff (and neither is he).
But let me tell you a story and you will hopefully see what I feel.
Growing up in a single parent home with financial struggles meant not very fancy Christmases. Not that the holiday needs to be fancy. But I don't have the memories of wanting something so desperately and being so thrilled when Santa or my mom came through with it. That just didn't, couldn't happen.
I had one magical Christmas in my childhood. It's a story I will share later this week.
But this isn't about my magical Christmas. It's about the lack of magic that I've had.
Jeff and I were watching TV, talking about holidays. He had bought me what I considered my gift on Friday (and I had bought his).
He had just surprised me at Target by placing a KitchenAid stand mixer in the cart... telling me it was another gift. I've wanted one for a long time but always made excuses to not ask for one.
So now I've got the expensive make up I wanted, the mixer I never dreamed I'd have.
Jeff is looking at artificial Christmas trees online. Finds a Charlie Brown tree and I tell him about the artificial tree my mom and I had. 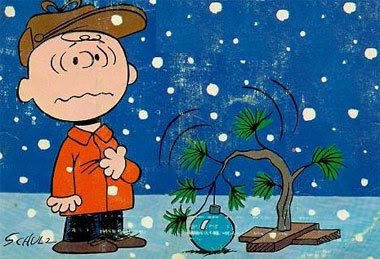 It was plastic. Not the realistic type plastic trees that are made now and no metal stand or trunk. The entire thing was plastic. And it melted. So branches were always being lost because bits would melt into the lights. Couldn't leave the lights on for very long- bulbs all along the strand of lights had clumps of old melted plastic on them. And we had the big tacky flashing star at the top. Mom called it the "Eat at Joe's" star. It was a table top tree, not very big.
I describe it to Jeff and he says to me, "That's why I bought the mixer. Because you didn't have magic Christmases. And I want to give you magic at Christmas as much as I can."
Indescribable. Those feelings... no words.

That is very very sweet! I didn't have a happy, wonderful childhood and I don't really remember any of my Christmases...I do remember the last couple which were my children's Christmases and seeing their faces.

My hope is for them to always feel magic, and maybe someday I'll have a magic Christmas.

Jeff sounds like a great man! And I would LOVE one of those stand mixers but, I too, would never ask for one!

I'm lucky enough to have had a pretty stable happy childhood. I remember magical christmases. Still it didn't prepare me for the genorosity of my in-laws who go NUTS at Christmas.

My first Christmas with them I ended up crying because I was totally overwhelmed by their gifts. I am not good at getting stuff. (I'm a giver by nature)

The best thing about Christmas for me is the OMFG gobsmacked look on someone's face when you get it just right.

I try and try with my Hubbie but have to admit defeat. I get him the BESTIST prezzies but being an Aspie I guess he never gets that GIANT rush of joy that other people do.

HE's all Yeah that's cool. Just what I wanted. thanks.

What a wonderful story, it makes me want to cry! Your man sounds amazing and your mom sounds hilarious with the "Eat at Joe's" star. I love it when trashy stuff is never acknowledged to be anything more or less. :)

Thanks so much for coming by and joining the Bitchin' Followers at the Club. You are awesome!

Wow. That right there; that has made me decide to Follow you :) Sweet.

Jeff is a Saint! The really wonderful part about a happy marriage is having love and respect for one another and understanding the value of kindness and a little unexpected surprise now and then. Larry is good that way, too. That's why he recently graduated to Pope.

Liz, That just brought tears to my eyes. What a wonderful husband you have!