Sundays In My City

Sundays In My City is hosted by Unknown Mami. Click the button to go visit her site. This is my first foray into this weekly assignment and I am not going about it in the exact way I'm supposed to but I think it still gives a nice little slice of Sunday In My City!
Sundays in Indianapolis are all about one thing for most of this fair city... Football!! The Indianapolis Colts are a fun team to support. Many of the players are very involved in the community and have proven themselves to be upstanding members of our city. I'm not a football fan, but I do like supporting a good team- and not just good by wins, but good by the quality of people. Last week, Teagan's themes at school were the letter Q and "famous." During the week, they focused on the letter Q (quilt, q-tip, quiet, etc) and what it means to be famous. On Friday, which was also a city wide "Colts Blue Friday" where all are encouraged to wear Colts gear in support of the upcoming Big Game, the kids were encouraged to wear Colts gear or wear blue and they would be learning about a famous Hooiser whose job starts with Q. Peyton Manning, Quarterback. We don't have Colts gear for the kids. Well, Zach has a really cute Colt warm up suit he got from Mimi and Pop-pop for his birthday. And Teagan once had a blue Colts cheerleader outfit- but that was a couple of years ago. Jeff and I just haven't made it a priority. When we received word about Teagan's school doing Colts Blue Friday, we had every intention of picking her up a t-shirt or something at Target. Except we never got to Target. Thankfully, Teagan has the world's most awesomest dad ever. I was just going to send her to school in normal clothes. But he said- no way. He was insistent that every other kid would have Colts gear on and that Teagan would be upset that she didn't have anything blue or Colts. As soon as he was showered and dressed and she was dressed on Friday morning, he took her to a 24 hour store (Meijer) and got her this adorable pink cheerleader outfit. They left the house a little after 6:00. In the morning. Because he didn't want her to feel "less than" at preschool. God, I love him. 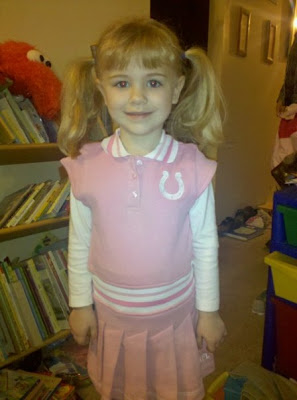 It was a day of learning kindness, apparently. Later in the morning, the school's director sent out an e-mail telling this story (personal info changed):
As you all know today was Colts day! You can read the note below from a dad in Ms. S's room, which is a shining example of one little boy's choice to be a friend and show exemplary character. We are very proud of E today! Way to go, E for reminding us all what it means to be a friend!! "I witnessed one of the nicest things ever this morning. I took R and N in to school and EVERY kid in R’s class had a Peyton Manning jersey on. I felt so bad for R. Then, one of the kids [E] pulled a jersey out of his bag and said, “R, I have an extra one!”. Ms S was teary eyed and I cried my way to work." -Dad
So I hope you find some kindness on this Sunday in Your City and I hope you find a way to share kindness with others- today and every day!

I LOVED your post and so glad to see a newbie on Sundays in the City:)

Teagan looks adorable in her outfit and the e-mail about the boy who shared an extra jersey was really special. Thank you for shareing and have a wonderful sunday!

Sonya stole my comment there in her second paragraph. Except I was going to say "utterly adorable" :-)

Go COLTS! You already made me cry this morning with that little story. I am sure the post pregnancy hormonal imbalance didn't help either...Don't you wish grown-ups were half as thoughtful as preschoolers are. Love them.....

The cheerleader outfit. Cute. I immediately thought of Grease.

Love that story of sharing! Your cheerleader is too cute! I live in Caramel In. and I just remember that basketball was huge!!Have a wonderful Sunday.

What a cute outfit! Think Teagan will become a cheerleader in high school?? Do you have a future Cheerio on your hands?

I like Manning. He's a class act. She is starting out young as a Colts fan. Cute outfit for a cute girl.

The next time you're in the market for Colts gear, check out Marshall's. They usually have jerseys at a great price!

What great acts of kindness!

Her little cheerleading outfit is so cute!

And what a sweet thing that little boy did in the class. It always warms my heart to see people act kindly, especially when it's little children doing so.

It's Sunday In "Your" City so you are allowed to do it any way you want and might I say you did it beautifully. The ending had me all choked up and feeling warm and fuzzy inside.

Teagan looks fantastic in her cheerleading outfit and her dad is fantastic for getting it for her.

I loved your Sundays in my City post, and Teagan is an adorable cheerleader. What is it with little girls and cheerleading? They love it.

I love that your school gets the kids into the team spirit. And your hubby is AWESOME for for getting up early and pitching it.

Thanks for sharing your City,
xo