This Should Be Fun!

I recently won a really great prize package from the Indiana Department of Tourism at the Indiana State Fair.  I answered a question they had posted on Facebook and got a prize.

It's a little more complicated than that because when I went to the booth to answer the question, the volunteers working the booth had no clue what I was talking about.  But when I came home and posted on their Facebook wall (more just to let them know that the people there didn't know about the Facebook contest), they offered to send me the prize.

It's a pretty sweet prize and I was able to coordinate everything and make it work to turn this prize into a fun family overnight getaway!

An overnight stay at a downtown hotel.
A gift certficate for a downtown restaurant.
4 box seats for an Indianapolis Indians game.

That's probably the best prize I've ever won! I was so excited when we opened the envelope! Jeff pulled out the voucher for the baseball game first... then a piece of paper... the restaurant gift certificate... and another piece of paper... an overnight stay!  WOW!

A friend is coming to stay at our house to take care of our little dog.  We're going to head downtown and pick up our baseball tickets.  Then we head to the hotel (Courtyard by Marriott) for an afternoon of swimming.  Then an early dinner at that restaurant (Champions Sports Bar & Grill).  Then off to the baseball game!  It's the last game of the season and if we make it to the end of the game, there will be fireworks!  Then to the hotel for a good night's sleep.  In the morning, we might hit the pool again before packing up for home.  We might stick around downtown to do paddleboats on the Canal, we might go enjoy the Zoo or White River State Park.  Or we might just come home.

In unrelated news, I did something fun yesterday!  I had a day off work and used some of that time to get some housework done but as I was folding laundry, I quickly realized that I didn't want to just sit around and do housework with my day off.  I thought about going to see a movie and I went out and did a little shopping (Old Navy- Teagan needed a few things).

And I faced this weird anxiety that I have.

I get really weird about getting my hair cut.  There's a woman at church who has her own private booth at a local salon and many women from church go to her and I've admired her work many, many times.  I've been wanting to call her for a while but I have this unusual fear about getting my hair cut.  I have no clue why but I really don't like going to get my hair cut.  I remember in junior high going to a salon and my mom really liked this stylist and I remember following her from salon to salon at one point.  But it was never important to me.

In college and adulthood, I never had my own hair person that I just had to go see.  Around the time I met Jeff, I met a woman who was a gifted stylist.  I started going to her somewhat regularly- she's the reason I originally went red with my hair.  But the expense didn't feel worth it to me.  And she started telling me some wild stories about her life that made me somewhat uncomfortable (because they sounded totally fabricated- I'm all for people sharing but only when you're really being truthful).  So I stopped going.

Yesterday, I decided I had a day with nothing to do so this would be the ideal time to call up the woman from church and see if she might have time for me.  And she did.  So instead of going to a movie, I went and got my hair cut. 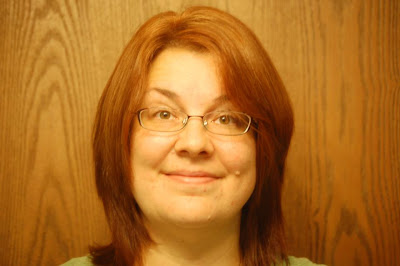 Best of all, this woman and I chatted throughout the cut and shared a lot about our lives and we have so much in common!  Not only did I get a great cut, but I bonded with someone who is part of my church family.  We just never really had the opportunity to get to know each other before.

Congratulations on your win, Liz!!! What a fun treat for you and your hubby...hope the rain holds off for the game. And your new haircut is darling...glad you found a new stylist and friend :)

Its looks really nice on you! The perfect cut for you I believe :)

That prize ROCKS! And the haircut looks beautiful!

I'm a pretty low-maintenance girl. I don't get manis or pedis or highlights or lowlights. I've had my eyebrows professionally waxed...once. But in the last several months I've started going to a really great stylist, and to me, it's money well-spent. She makes my hair look great--and it grows out well too, which is good for me since I procrastinate on my trims! So my $40 haircuts ($50 with tip) are worth it to me.

So much awesome in this post! First, an amazing prize that you can share with your family. What a treat! And then a lovely haircut that came with the bonus of a deepened relationship.

The "contest" is a pretty strange story but glad you "won". Enjoy!

Love the cut! I am impressed with your win. What a wonderful prize. Have a great time!

The hair looks amazing! Congrats on the prize. It sounds like you guys will have a great time!

Congratulations on winning that prize. What a fun treat!

And isn't it the best feeling to find a stylist you instantly love?