But first, I want to share a brief example of why the movement is important.

Then, out of curiousity, I googled "bossiness quotes."  Amy Poehler, Heidi Klum, Star Jones, Ida Lupino, Sheryl Sandberg.  And some of the quotes were about how women shouldn't be bossy, say, in their marriages. 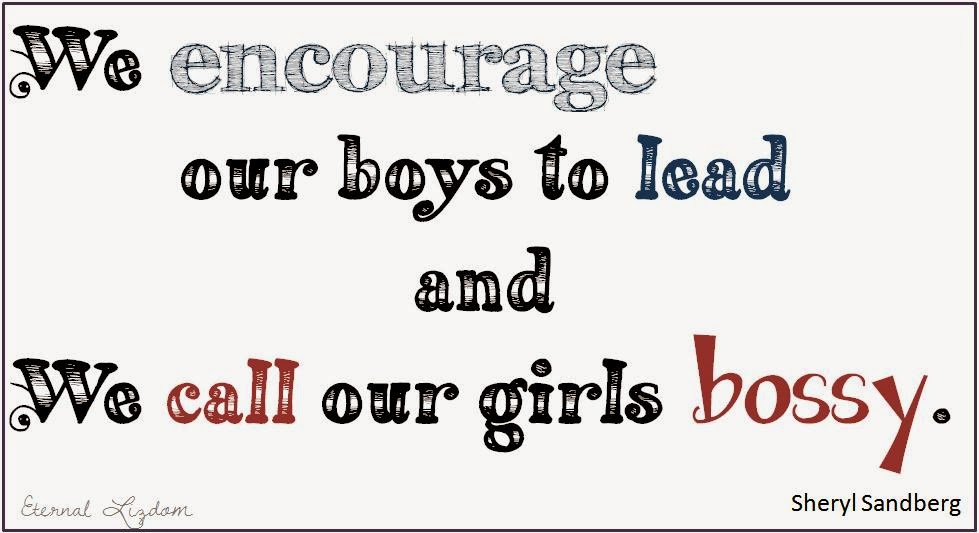 Here's what I would ask of you before you simply dismiss this "ban bossy" idea based on sensational headlines...

Click on "Leadership Tips" and read some of the pdf's that are provided.  For girls, for parents, for teachers.  Then stop and think about your words and actions.  Think about how you present yourself.  Most of my readers are women - how often do you phrase a statement as a question or start a phrase by immediately downgrading your statement by making it a thought or opinion?  Read the opening letter from Rachel Simmons.

Once you get to understand what "Ban Bossy" is really all about, you will find that there are tools available to open up some great discussions with your daughter.

Maybe I'm sensitive to this because I have a daughter that could be called bossy.  And because we are blessed to have had people in her life that see her leadership skills.  Maybe it's because I work in corporate America and see the disparity and hear it in everyday language.  Maybe it's because I do see some of those behaviors in myself.

Here's what I really take away from that quote from Sheryl Sandberg.  It isn't so much about "bossy" vs "lead."  Instead, I see the issue as being about "encourage" vs "call."  If we are uncomfortable with talking about how girls are bossy and boys are leaders, take note of encourage vs call.  Because one word is active and the other is passive.  One word is about development and growth while the other is about objectification and labeling.

Very soon, I am going to print out the Leadership Tips for Girls and the Leadership Tips for Parents and I'm going to have a conversation with Teagan.  She's about to turn 9, she's a perfectionist, she internalizes everything out of fear of not saying/doing/being right, and she has amazing leadership abilities.  Natural born leader.  People love to be around her.  People are brightened by her smile, her ideas, and her humor.

I want to encourage her to be a leader because a leader leaves a place and leaves people better than they were before the leader was there.  I want to avoid the word "bossy" because of the negative connotation and the quick growth from bossy to aggressive bitch and other negative terms.

And as a sidebar - Take some time to read Lean In.  I really enjoyed it.

I've kind of been sticking my head in the sand when it comes to "Lean In" and the bossy debate. Maybe I'll do some investigating and see what all the fuss is about.

I haven't heard of this movement (is that what it's called?) until your post. I think it's like the stigma about a woman who's a great leader is a b****, when actually no, she's just a great leader. Thanks for getting the wheels turning on a Thursday afternoon ;)

I've been following this for the last few days ... appreciate your take on it as well as the resources you shared. Very helpful to this mother of a tween girl!

The one thing that I think is missing from this movement - or maybe is another thing altogether - is also teaching girls that yes, when you're assertive some people will call you bossy. Don't worry about what those people think. As a young girl, worrying about the opinions of others held me back for a long time.

Crystal, if you read the downloads on the website, I think you will be pleasantly surprised. There are messages about trusting your inner voice, speaking up in frienships, asking for help. They clearly understand that the drive for perfectionism, among other things, is part of the problem that is ingrained in our girls.